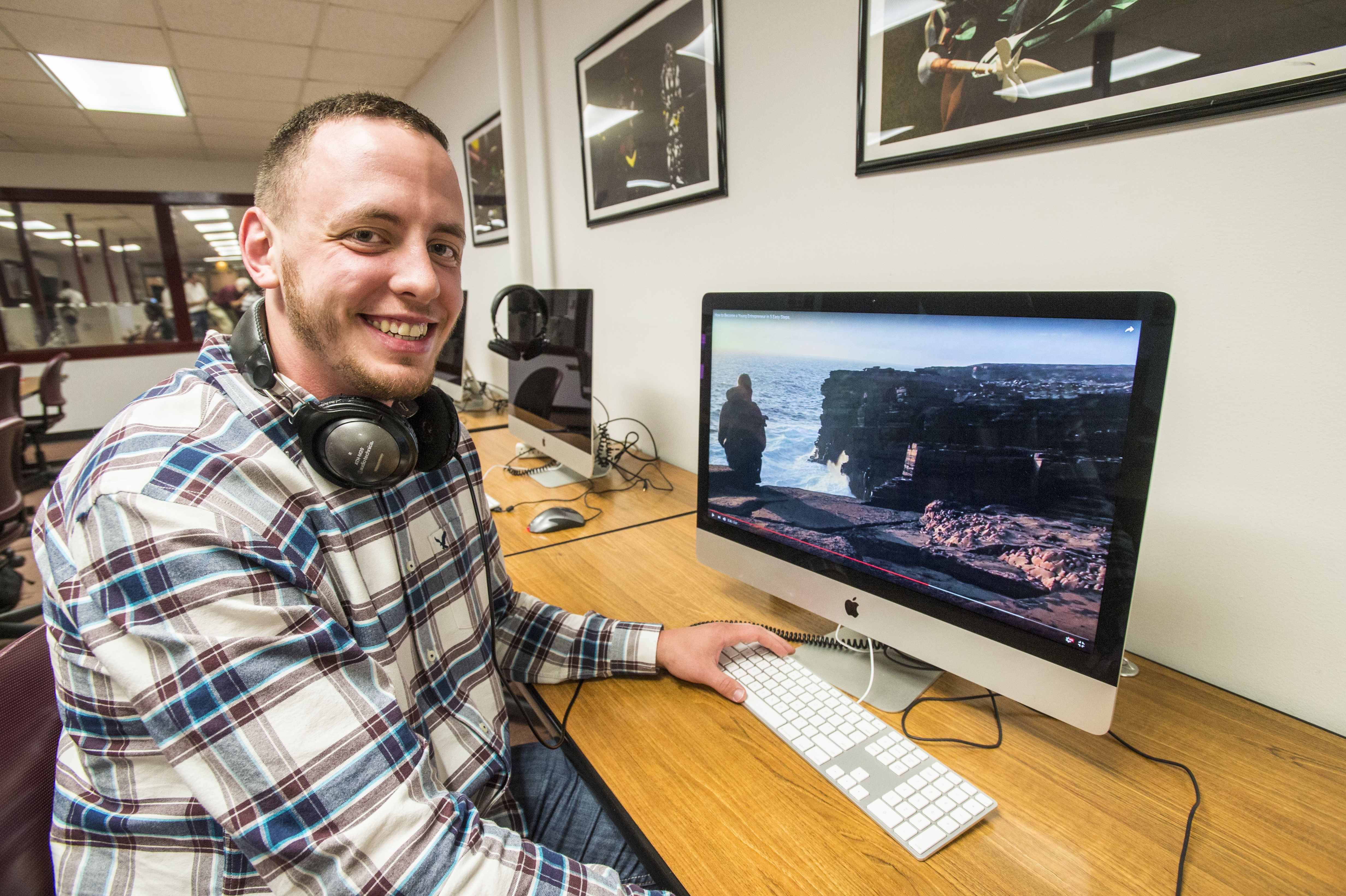 Rediscovering his passion -- Daniel Bach, a non-traditional student from Batavia, will graduate with a degree in cinema from Southern Illinois University Carbondale’s College of Mass Communication and Media Arts on Saturday, May 14. (Photo by Steve Buhman)

CARBONDALE, Ill. -- Daniel Bach’s path toward earning a degree in cinema took several turns the past few years. He has been a construction worker, a warehouse manager, an engineering student, and he worked for non-profit organizations. Bach even found time to be a third-party online retailer with his own business.

Along the way, Bach rediscovered his passion for filmmaking, and will earn his bachelor’s degree during Southern Illinois University Carbondale commencement exercises for the College of Mass Communication and Media Arts at 5:30 p.m., Saturday, May 14, at the SIU Arena.

Bach was one of two SIU Carbondale students last fall named University Innovation Fellows by the National Center for Engineering Pathways to Innovation (Epicenter). The program provides students with tools and knowledge to help increase entrepreneurship, creativity, innovation and design thinking. He spent a week during spring break at Stanford University, honing communication skills and learning more innovative practices that large companies, such as Google, Microsoft and Lucas Films, utilize.

“It gave me a lot of insight into Silicon Valley,” said Bach, 25, a 2009 Batavia High School graduate. “I wanted to learn about that and gain that experience. That is where most of our technology comes from, and I wanted to know how it works.”

Bach’s online company, Video Grouch Bag, operates through Amazon, and sells small housewares and other items. Bach said he had $150,000 in sales last year, selling “anything and everything I can get my hands on.” It helped finance his way to his degree.

After attending the College of DuPage and earning an associate degree in liberal arts from Waubonsee Community College, Bach moved to Bend, Ore., after an invitation by his sister, Mary. He took engineering classes at Oregon State University-Cascades, a branch campus of OSU, but “decided that wasn’t for me.” Bach said he was “always more passionate for filmmaking,” dating back to his childhood and high school.

While he loved the region and his work as a crew leader with the Heart of Oregon Corps, Bach recalled SIU Carbondale’s reputation for film.  He started at SIU Carbondale in fall 2014.

“I heard when I was in high school that this was THE program to go for film in Illinois,” Bach said. “That’s been my experience here; with the Big Muddy Film Festival and the people who I have gotten to meet through that.”

Bach is working on a documentary “The Rainmaker’s Garden,” that focuses on Dave Dardis, a local artist and SIU alumnus from Makanda. He is about to complete filming and anticipates it will be about 20 to 25 minutes long. Bach was one of 25 students last year to earn a Research-Enriched Academic Challenge (REACH) Award for the project.

Jyotsna Kapur, a professor in cinema and photography and Bach’s adviser on the film, said she first came to know Bach in her “Introduction to Film History and Analysis” class, a large lecture-style class. Bach made an impression on her even then, she said.

“I have found Dan's curiosity and passionate engagement with people and his environment; his openness to questioning assumptions; and seeking a deeper understanding of why we are where we are absolutely invigorating,” she said.

Kapur said Bach’s documentary on Dardis is both a reflection on as well as part of a process of connecting personal memory to history.  Kapur said as Bach asks Dardis about his art and life, he is “connecting the dots between art, politics, and the 1960s and the present, asking as another generation, what lies ahead?”

Bach said he likes documentary and narrative films, and plans to pursue a career in filmmaking and acting and continue with his online business while looking for additional opportunities. He began making videos in high school as a way to express himself.

“Films allow you to be expressive,” he said. “If I have an idea, emotion or something that I find interesting, it’s an outlet to create something and express my own ideas. In construction, when I was a project manager, you have some creative expression but it’s not as direct.”

Bach said it is important to take advantage of the numerous opportunities available at SIU Carbondale. Through the Big Muddy Film Festival, Bach was able to meet filmmakers and alumni Edgar Barens, a 2014 Academy Award nominee, and Kris Swanberg, whose film, “Unexpected,” premiered at the 2015 Sundance Film Festival.

Daniel Overturf, a professor in cinema and photography, said Bach financed his own way last summer to participate in an interdisciplinary university program to Scotland. Bach “knows how to take initiative,” Overturf said.

“Dan Bach is the ultimate solution to not worrying about MAP grants or state funding,” Overturf said. “He wouldn’t relent to such negativism. He just figures out a way to do it. I think in some ways that is why he got more than the average student got out of the trip to Scotland. He wanted to take advantage of every minute possible and knew how hard he worked to get there.”