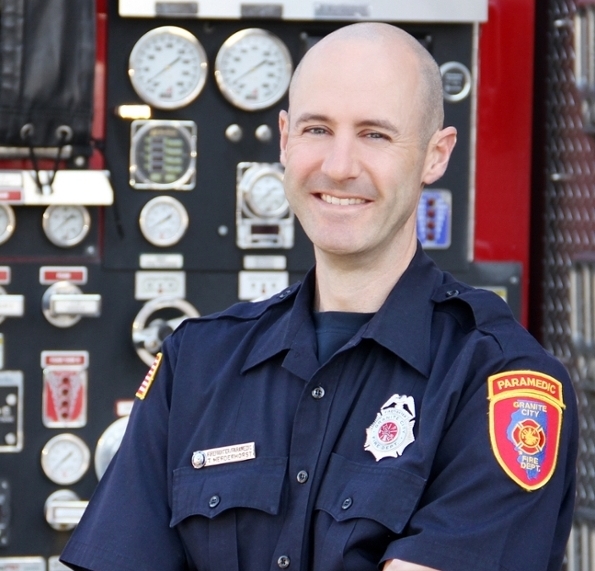 CARBONDALE, Ill. -- Circumstances over the past several years may have thrown several curve balls at Trevor Herderhorst, but the Granite City firefighter/paramedic did not lose his passion for earning his degree in Fire Service Management from Southern Illinois University Carbondale.

A former collegiate baseball player whose initial goal was to be a college coach and athletics director, Herderhorst opted for a “drastic career change” about 11 years ago to pursue a career as a full-time firefighter. It was several years later, however, while working toward a bachelor’s degree in the Public Safety Management program, that Herderhorst faced a life-threatening change: esophageal cancer. With the support of family, fellow Granite City firefighters and classmates, Herderhorst overcame that challenge and he is looking forward to earning his degree during commencement exercises for the College of Applied Sciences and Arts at 5:30 p.m., May 14, at the SIU Arena.

Public Safety Management classes are available online and at four off-campus locations in Illinois and California. Herderhorst, 35, said the program “not only prepared me for this career, it has exposed me to many different ideas and innovative operational procedures.”

Herderhorst’s transition to firefighter began after a grade school classmate talked to him about becoming a volunteer firefighter with his hometown Cahokia Fire Department in 2005. After taking some entry-level fire science classes at a local community college and later earning an EMT license, Herderhorst obtained an entry-level firefighter position with Olin Brass in East Alton in 2009.

In January 2009, he started in SIU Carbondale’s Fire Service Management program. Herderhorst married that year as well. He later realized the important role of EMS in the fire service and earned a paramedic certificate from Lewis & Clark Community College in 2013. He also attended the St. Louis County Fire Academy in spring 2014. These “necessary speed bumps” meant taking time off from completing his bachelor’s degree.

Hired by the Granite City Fire Department in October 2014, Herderhorst was on the job for only 49 days and still on probationary status when tests for persistent heartburn in his chest revealed a cancerous tumor. Herderhorst said doctors told him there was only a 30 percent survival rate and that “you have one of the worst cancers there is.” Faced with concerns over his career, family and earning the degree, Herderhorst said it was the support he received that carried him through.

Married with a young son and daughter, Herderhorst said worry over his job was taken care of when Granite City Fire Chief Vince Martinez told him to “focus on your health, your job will be here.” During ensuing radiation and chemotherapy treatments, fellow Granite City firefighters covered Herderhorst’s shifts for more than eight months so his family did not lose his salary or health insurance. They organized fundraising benefits, mowed his lawn and cooked meals for the family. He had six weeks of chemotherapy and radiation early in 2015 and surgery to remove the tumor on April 13, 2015. At 6 a.m. that day, he was met in the atrium of Barnes Hospital in St. Louis by his fellow Granite City firefighters in their uniforms and helmets, who wanted to show their support for him.

“That was so important to me to finish,” Herderhorst said. “Being able to graduate culminates so many things for me.”

Kistner said Herderhorst has “done quite well” in the face of adversity.

Herderhorst said teamwork is an important part of the program; students with 30 years firefighting experience work with students like himself, who are just starting in the field. Students embrace new ideas, and discussions center on collaboration and teamwork -- much like in the fire service and sports, he said.

“When I started the program I really felt like I was accepted,” he said. “The class discussions were what kind of knowledge can we bring to the table and how can we progress the fire service.”

Herderhorst said it was also important to earn his degree to honor his parents, Ray and Eliene Herderhorst of Cahokia. He is the first in his immediate family to earn a college degree; his wife, Tiffany, earned her bachelor’s degree from Greenville College where they met. Herderhorst spent three years there after graduating from high school.

“My parents sacrificed so much for me to be able to do this,” said Herderhorst, who is considering pursuing a master’s degree in Fire Service Management at SIU Carbondale. “I feel I owe this to them as much as to myself to do this. This was always on the backburner of something I was going to do. I don’t want the education to end. As I learn more about my job, there will be more challenges and more things we face in our career field.”

Herderhorst credits his wife and their children, Chase, 4, and Olivia, 3, for their support.

“Nothing I have accomplished would have been possible without the support of my family, particularly my wife,” said Herderhorst, who works 24-hour shifts. “She’s a single mom when I’m at work, and has a full-time career of her own. She makes sure I’m squared away. She keeps everything in order. She was there with me for every treatment just like she has always been.”

Herderhorst said the decision to pursue a lifetime of serving others is the correct one. He found the “round hole for the round peg.”

“I realized I wanted to help people. When they call 911 they are having the worst day of their life, I wanted to have the opportunity to make a positive impact in it. This program has uniquely prepared me to do just that.”

College of Applied Sciences and Arts