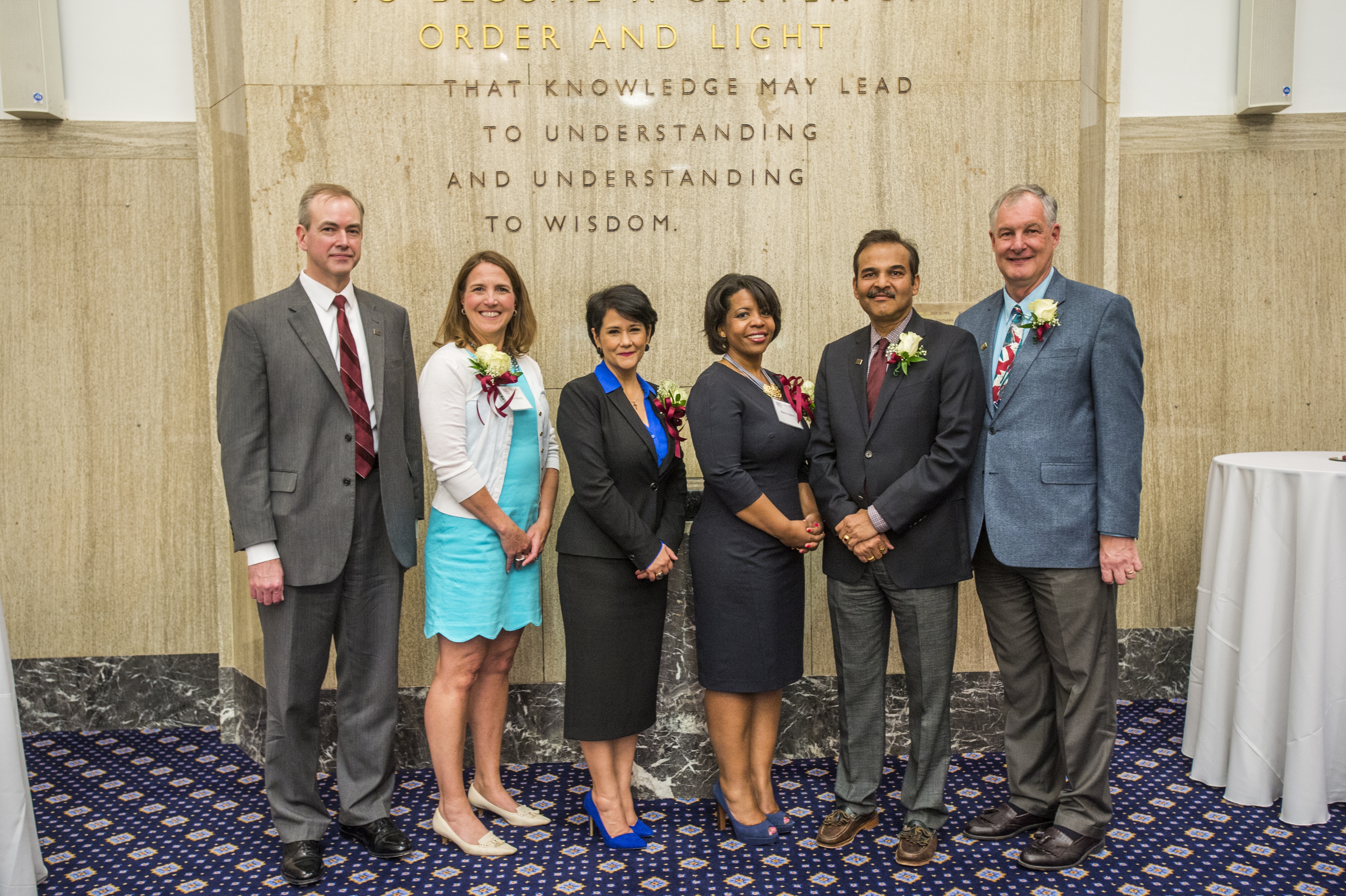 Reina Irene Mejia-Chacon of Honduras, Maria Hughes of Louisville, Ky., Sunil Sinha of Richmond, Va., and Drew Stoker of St. Louis were recognized for their professional achievements and contributions to the College of Business. The first awards ceremony took place in 1986 and the Hall of Fame induction is the college’s highest honor. The 2016 ceremony and reception was April 22 at Morris Library’s John C. Guyon Auditorium.

The college also honored Teresa Katubig of Marion as the 2015-2016 Southern Illinois Business Leader of the Year.

A participant in the college’s Executive in Residence program, Mejia-Chacon met with and mentored students and conducted mock interviews with them while on campus recently.

Hughes, a 1990 marketing graduate, is vice president of Enterprise Solutions for Humana, a Kentucky-based health insurance business with more than 13 million customers nationwide. She provides consulting and business services expertise to the company and her responsibilities include acquisition integration, internal consulting and program management, corporate procurement and operations shared services. Her previous professional experience includes about 15 years in executive leadership roles with Ford Motor Credit Co.

A founding president of Humana’s African-American Network Resource Group, Hughes is a former board member of the National Safe Place organization. She was named to the “Women to Watch in Health Care” program in 2013 by Deloitte Consulting and is a member of the College of Business Minority Affairs External Advisory Board.

Sinha, 1998 MBA graduate, is a director of Clinical Quality and Patient Safety for ChenMed Inc. During his career, Sinha has held numerous positions in the business world including vice president for medical affairs at Bon Secours Memorial Regional Medical Center, Maryland regent for the American College of Healthcare Executives and associate chief resident at the Loyola University Medical Center.

Appointed by President Barack Obama to a three-year term as a judge for the Malcolm Baldridge National Quality Award program, Sinha is an American College of Physicians fellow. He is also a senior fellow for the Council for Excellence in Government and the Health Research Education Trust.

Stoker, who earned his finance degree in 1975, is a senior contracts manager at Boeing Co.  A longtime company executive, his responsibilities include preparing, evaluating, proposing and negotiating direct commercial sales contracts to foreign governments and companies for Boeing defense and security products and services. In addition, he helps Boeing contracts personnel develop international contracting capabilities via training and mentoring programs.

A former Navy pilot, Stoker participated in numerous carrier deployments to the Indian Ocean, Mediterranean Sea and the North Atlantic Ocean.  He also trained new officers to become naval flight officers before taking a position with McDonnell Douglas in St. Louis in 1992. The company merged with Boeing in 1997 and Stocker has been with the company since.

Stoker is active in the Boy Scouts of America organization. He is a volunteer leader, assisting scouts advance through the ranks up to Eagle Scout, and helps organize and lead Boy Scout high-adventure trips. Stoker was also the keynote speaker for the April 9 College of Business student honors day event.

Current College of Business students announced inductees and participated in the awards presentation. The students announcing the Hall of Fame inductees were Trevor Pederson, a senior marketing major from Batavia; Farah Naomeshie, an MBA student from Cotonou, Benin Republique in Africa; Savannah McCord, a senior management major from St. Louis; and Yazmin Celaya, a senior finance major from North Aurora.

Southern Illinois Business Leader of the Year Katubig, a 1993 accounting graduate, is the founder, president and CEO of HireLevel Powered by Extra Help. She founded the business in Johnston City as Extra Help Inc., a small temporary placement company, in 1995 and has expanded in services and scope since that time. With eight locations in six states, the agency now provides full-service workforce management, including employment and staffing services and payroll management.

Katubig is a member of various professional and public service organizations, including Rotary International and the National Association of Women Business Owners. She is also involved with volunteer and humanitarian agencies including United Way, Nights Shield Children’s Center in West Frankfort, and the Lighthouse Shelter for the Homeless in Marion.