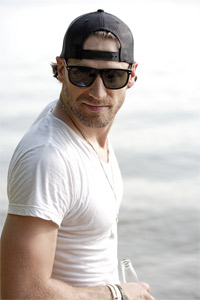 The “Campus Events Network Springfest 2016 College Days, Country Nights Back to College Tour” hits the SIU Arena at 7 p.m. on April 23 courtesy of SIU’s Student Programming Council. The doors open at 6 p.m. and the concert will feature the Nashville recording artist and special guests.

Rice’s “Ignite the Night” debuted atop the Billboard Top Country Albums list and was among the top three on the Billboard charts for albums of all genres at that time. The album generated two top-five songs: “Ready Set Roll” and “Gonna Wanna Tonight.” Rice is the co-author of the Florida Georgia Line hit single, “Cruise,” and previously toured with Kenny Chesney. He has since enjoyed sell-out crowds as the headliner and is preparing for the release of a new album. Rice recently earned a nomination for the Academy of Country Music’s New Male Vocalist of the Year award, to be presented April 3.

Tickets for the SIU performance are $10 for SIU students (with current ID) and $20 for general admission, if purchased in advance. The day of the show, tickets are $17.50 for students and $30 for the general public. Ticket fees do apply.

Tickets are available online at www.siusalukis.com, by calling 618/453-2000, or in person at the SIU Arena box office or McLeod Theater.