Breaking it down – Satya Harpalani, professor of mining and mineral resources engineering at Southern Illinois University Carbondale, examines equipment in his laboratory as he studies how coal samples change as they are consumed by microbes that convert them into cleaner-burning methane gas. (Photo by Steve Buhman)

Biology may be key to coal-to-gas conversion

CARBONDALE, Ill. – There’s no denying the power of coal. The ancient, hydrocarbon-rich material supplies a major portion of the world’s power needs as a ready, plentiful means of generating electricity. And the United States has more reserves of recoverable coal than any other country.

But there’s also no denying that simply burning coal comes with environmental costs that many say are unsustainable.

Two researchers at Southern Illinois University Carbondale, however, are working on a way to convert the innate power of coal into something far more environmentally friendly, and doing so using a technique based on a natural and sustainable process that has gone on for millions of years.

Yanna Liang, associate professor of civil and environmental engineering, and Satya Harpalani, professor of mining and mineral resources engineering, are using biology to convert coal to methane, which burns much cleaner than coal and produces half the carbon dioxide emissions.

Working with grants from the Illinois Clean Coal Institute and the U.S. Department of Energy, the two engineers are finding ways to fire up the microbes that eat coal and excrete methane. With promising results already in hand, the method could be applied to both the waste coal byproduct left over from coal mining, as well as abandoned coal mines and played-out gas wells across the country.

Coal gasification is not a new concept, but it comes with barriers, as well.

“Gasification of coal is usually done using high temperatures,” Liang said. “That produces a big carbon footprint and takes a lot of energy to do.”

Instead, the duo are working on a process called “bio-gasification” of coal, which transforms coal into methane biologically.

“Methane is a fuel that is cleaner than burning coal,” Liang said. “The process we’re using is a very mild process that doesn’t generate as many environmental problems as combusting coal. If you burn methane you release about half the CO2 of what you release by burning coal to get the same amount of heat or energy.”

Coal is ancient organic material – trees, plants, bushes and such – that lived, died, decayed and became buried in the ground over millions of years. The secret to the researchers’ process, therefore, lies in the tiny life forms that feast upon this organic material. For the researchers, finding exactly which particular microbes are the best at excreting methane was key.

To do so, Liang took samples of microbes found in the water surrounding the coal and conducted DNA sequencing. This helped identify more than 200 bacterial species, as well as some archaea species – single-celled organisms, some of which produce methane, that are genetically distinct from bacteria – that were present. Then it was a matter of finding how to stimulate the microbial activities.

“Coal is a big molecule and some of the bacterial species can break it down into smaller molecules and then even smaller compounds like ascetic acid, carbon dioxide and volatile fatty acids,” Liang explained. “And from there, certain archaea species can convert those smaller molecules into methane.”

“It’s a simple process. You have these microbes, and they work together as a community to break down coal into methane,” she said. “It’s a natural process. But our purpose is to speed up the process to generate methane faster.”

To achieve this goal, the researchers fed different nutrients to the microbes to promote their growth. Depending on the situation, the process would call for adding certain microbes to a coal supply, or simply encouraging what microbes are there by feeding them certain nutrients that encourage them to thrive, or a combination of both approaches.

There are several possible approaches the research might ultimately support. For instance, the microbes could be injected into an abandoned, flooded mine, where they could create harvestable methane supplies.

“When coal mines close they typically leave about 50 percent of the coal in place,” Harpalani said. “Half of it is lying there with lots of wide spaces, like a chess board, in between. In some cases we could feed the nutrients to microbes we know are there and maintain methane production on the coal existing in situ.”

In the case of waste coal left on the surface, operators could build a silo to enclose the coal and inject the microbes into it.

“The gas would bubble up and you would pipe it out, much the way an anaerobic digester works on a farm,” Harpalani said.

While Liang works on the microbe research, develops suitable nutrient recipes for different scenarios and optimizes the whole bio-gasification process to enhance methane yield, Harpalani, at various stages of conversion along the way, analyzes the coal to look for changes in its composition and clues for improving the process. He also takes special interest in the movement and storage of the methane gas as it is produced, as that is of key concern to suppliers who might want to use the method and harvest the gas in the future.

All together, the two researchers have garnered nearly $1 million in support of their research, which is scheduled to conclude next year.

Harpalani said the pair started on the concept in 2013 with a small seed grant from the ICCI. That $120,000 grant had the researchers looking mainly at using the process on waste coal – coal that is too small, fine or impure to use – which is often left in slurry ponds or piles on site at coal mines.

Encouraging results prompted the two to apply for DOE grants in 2014 and 2015, which allowed them to look at applying the process to coal both “in situ,” that is, still in the ground, such as in abandoned coal mines.

“If you think about it, we have trillions of tons of coal resource in the U.S., but 90 percent is unmineable,” Harpalani said. “It is either of poor quality or too deep, or the seam isn’t wide enough to justify building a mine. So instead of just leaving it there, this process would mean we can still get something out of it.”

The process also could potentially be used out West where gas field wells occasionally dry up and stop producing. Injecting such wells with the right microbes and feeding them could become a regular part of a recharging regimen that could keep them producing well beyond their normal lifespan.

“We could use this technology to recharge the depleted area, let it sit and soak for a while and then start harvesting the methane again,” Harpalani said. “We would use all the existing infrastructure, process it a little to make it pure before putting it in the pipelines.”

The researchers ultimately hope the process leads to a cleaner, more environmentally friendly way to use a massive resource here in the United States.

“Instead of treating coal as a waste, as something dirty, we can still use it to get something that is useful,” Liang said. “Methane is one way to do this with an environmentally friendly approach. We have lots of resources and we need clean energy, and coal is going to be here for a while.” 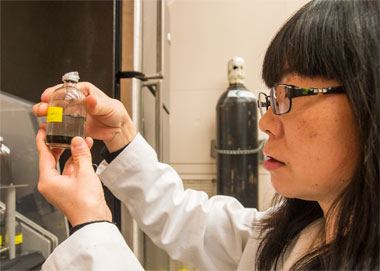