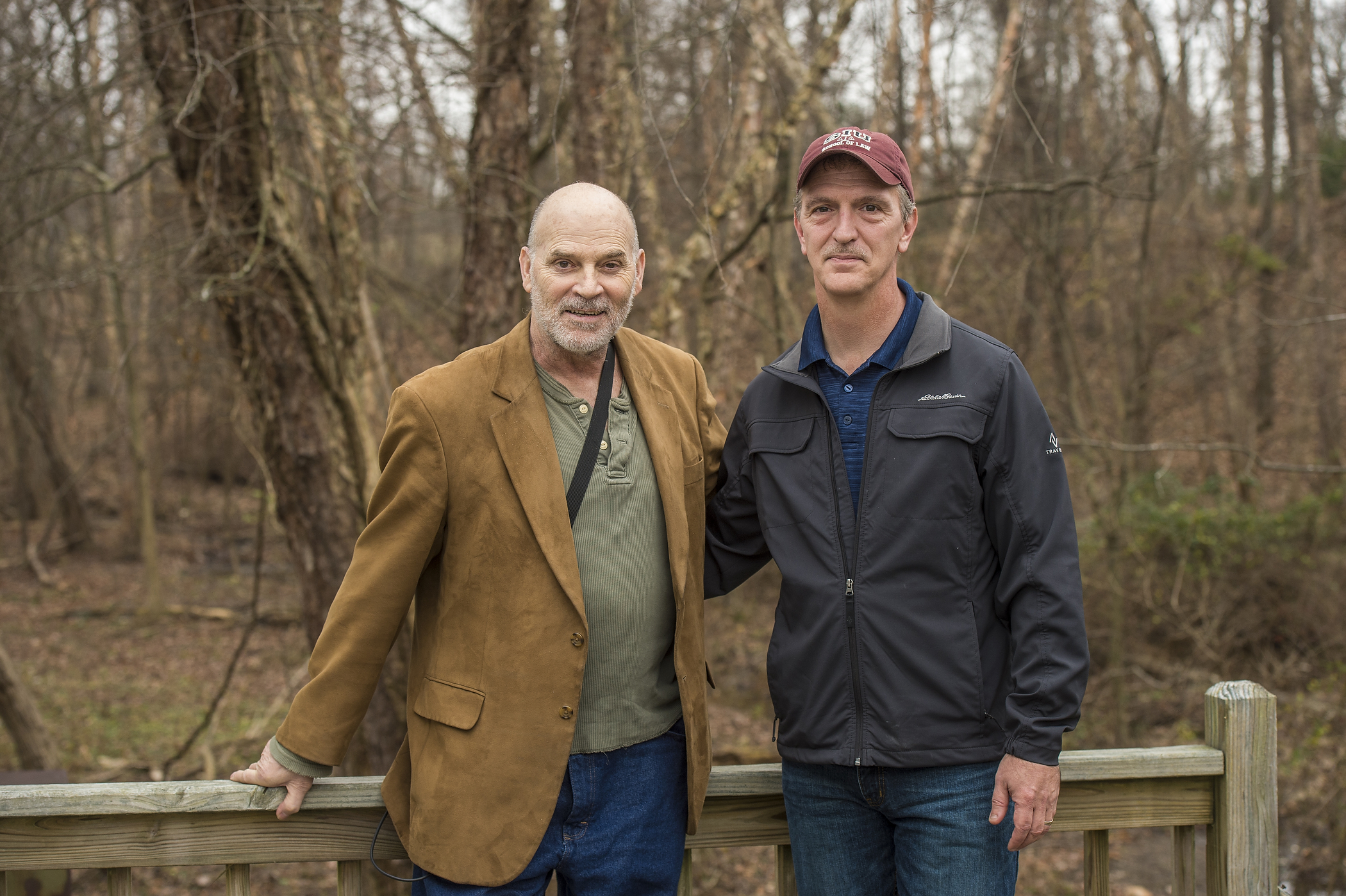 Thankful to be alive – Allan Seymour, left, a third-year SIU School of Law student, is looking forward to returning to the classroom in January for the spring semester after suffering a heart attack and stroke while in class on Nov. 2. Scott Walker, a third-year law school student from Marion, is among the students who helped revive Seymour. (Photo by Steve Buhman)

The 63-year-old former construction explosives engineer opted to go to college and then pursue a law degree while in his mid-50s. He now is planning to return to the SIU School of Law in January -- less than three months after classmates rescued him from a heart attack and stroke suffered while in class.

Seymour continues to “fill in the gaps” of what happened shortly before noon on Nov. 2. He was stricken while in the law school courtroom with classmates in a simulated negotiation session. Seymour said he understands he was dead for nine minutes during the episode, and that his heart later stopped three times during quadruple bypass surgery.

“This is all about God,” said Seymour, a third-year law student from Trumbull, Conn. “He used the hands of others -- whether it be my classmates, the surgeon, nurses, or whomever. He directed all that.”

Peter Murphy II, 24, a third-year law school student from Springfield, was with Seymour in the courtroom when Seymour was stricken. Seymour slumped in his chair and was having difficulty breathing, said Murphy, who ran outside the courtroom, called 911, and then returned to assist other students.

Students John Hanson, Scott Walker and Trish Estes were also among those whose actions helped revive Seymour, though none of them was with Seymour in the courtroom at the time he was first stricken. Hanson was in an adjacent lounge area and retrieved the automated external defibrillator (AED) learning that Seymour was in cardiac arrest. Meanwhile, Walker, who was participating in a simulated project for class, and Estes, who was also nearby, went to the courtroom to offer assistance.

After students positioned Seymour onto the floor from his chair, Walker said he could not feel a pulse and that Seymour was not breathing; Estes noticed that Seymour was cyanotic and appeared to have been in distress for some time. Hanson applied the AED machine while Walker gave Seymour mouth-to-mouth resuscitation and Estes and Murphy began chest compressions. Their work continued as SIU Department of Public Safety officers and paramedics arrived.

Walker, Hanson and Estes all spoke of the AED’s importance. Murphy also stressed the importance of knowing CPR.

“Without it, I don’t know if our efforts would have been enough,” Walker said of the AED.

Estes, a 42-year-old mother of three from Paducah, is a second-year student. She recalls thinking of Seymour’s family while applying chest compressions and of Seymour’s birthday a few days earlier.

“He was literally unresponsive and I wanted so desperately for him to just take a breath but his color was getting worse and he was really struggling,” Estes said.

Walker, 48, of Marion, is a former U.S. Marine and Illinois National Guard veteran with EMT experience. Estes and Hanson also have CPR training in their backgrounds. Estes estimates it was about 25 minutes from the time Seymour was stricken to when he left by ambulance.

“Their response time was great,” Walker said. “It felt like an eternity to us because we were working. They were very thorough and very quick. They knew what they were doing. They got the IV started and got him on the board and knew they had to get him out.”

Hanson, 29, of Edwardsville, has been a pilot since high school. That focus helped in this situation, he said, because of the need to follow procedures. “It was an automatic reaction; something was seriously wrong,” he said. “It was the mindset to react to such incidents.”

Walker also recalls going into “default mode,” with a “narrow vision that we had one thing to do and hopefully somebody gets there quickly who can do more than we can.”

“You weren’t going to leave on my watch,” Walker told Seymour during a recent visit to his home.

Estes, who joked that she is referred to as the “law school mom,” echoed others’ sentiments that the 356 students, along with law school faculty and staff, are a family.

“I am extremely proud of how the law school community rallied to do what was necessary to save Allan's life,” Dean Cynthia L. Fountaine said. “It was a moving example of what can be accomplished when everyone works together. I am grateful to everyone who helped in any way, including those who held doors, who alerted others, who called 911, and who helped direct medical responders. One of the things that makes SIU Law a very special law school is the fact that we really are a family -- a close-knit community of people who care about each other.  Allan is a member of our law school family, and we are looking forward to his return to school.”

Seymour said he also had a stroke in 2014 at the end of his first year in law school, but opted not to say anything at the time.  His wife, Maryjane, who lives in Connecticut, and his five children, all of whom live in various parts of the country, rushed to Southern Illinois to see their husband and father after he was stricken. Besides his time at law school, Seymour lived in Carbondale for three years as a child while his father, Harry Seymour, Jr., earned a doctorate in elementary education from the university in 1960.

“I feel great. I feel like a new man,” Seymour said. “Obviously my plumbing has been cleaned out pretty good. I don’t have a new heart, but I have new plumbing there.”

Seymour spent two weeks at Memorial Hospital of Carbondale and two weeks in rehabilitation at Herrin Hospital. His goal is to resume class when the spring 2016 semester begins Jan. 19, and said the law school has given him a year to complete his coursework.

Laid off in 2009 from his construction-related job due to the economy Seymour said he began to think about what he could pursue. Although it was 40 years since he quit high school, Seymour gained his General Educational Development (GED), degree, attended Housatonic Community College in Bridgeport, Conn., and earned a bachelor’s degree in liberal studies from Southern Connecticut State University. He then looked toward attending law school in hopes of becoming a prosecutor.

Seymour did not think about his age when deciding whether to attend law school, but was optimistic about his future and ambition to become an attorney. He was, he said, “on a mission, so to speak.”

“I was always interested in the law and thought I could make an impact,” he said.