Blackwood’s novel, “See How Small,” is inspired by a grim, true story, the quadruple murders known in Austin, Texas, where they occurred, as the 1991 yogurt shop murders. A contaminated crime scene, a long delay in formal charges and arrests, new DNA evidence, overturned murder convictions and the unsolved murder of four teenage girls are all true-life elements in the novel.

The novel is fiction, though, not a documentary, Blackwood said. His story alternates points of view to tell the stories of the girls, who sometimes comment on the world they’ve left. Blackwood focuses more on how the girls’ families cope with the murders than on its gruesome details.

“The NPR pick was nice and somewhat of a surprise,” Blackwood said. “The NPR writer, Michael Schwaub, who reviewed it, championed ‘See How Small’ in a big way, so I feel really fortunate. I think it found its audience, which is a little different audience than for most novels, so I was really happy about that.”

Blackwood acknowledged that the book can be hard to read because of its subject matter, but he hopes readers also found “joy and wonder at being alive in the world.”

“I think it’s the nature of all good art to make us uncomfortable, to make us see the world in a new way and take us out of our habits,” he said. “I always have to ask myself: ‘If I’m not shooting for a unique way of seeing things as a writer, what am I doing?’ Why would someone pick this up 100 years from now and read it?”

“See How Small” came out in January as a Little, Brown and Co. hardcover. The paperback is by Back Bay Books. Blackwood is also the author of the novel “We Agreed to Meet Just Here” and the story collection “In the Shadow of Our House.”

The NPR list of “great reads” from 2015 includes quite a few titles (some 260 by their count), but to get on the list, the book had to receive a strong review from NPR reviewers. Blackwood’s book was well-reviewed many places, including “Publishers Weekly,” “Library Journal” “Booklist,” “Chicago Magazine,” and it was a featured review in “The New York Times.” 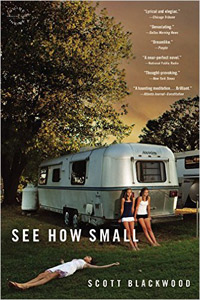