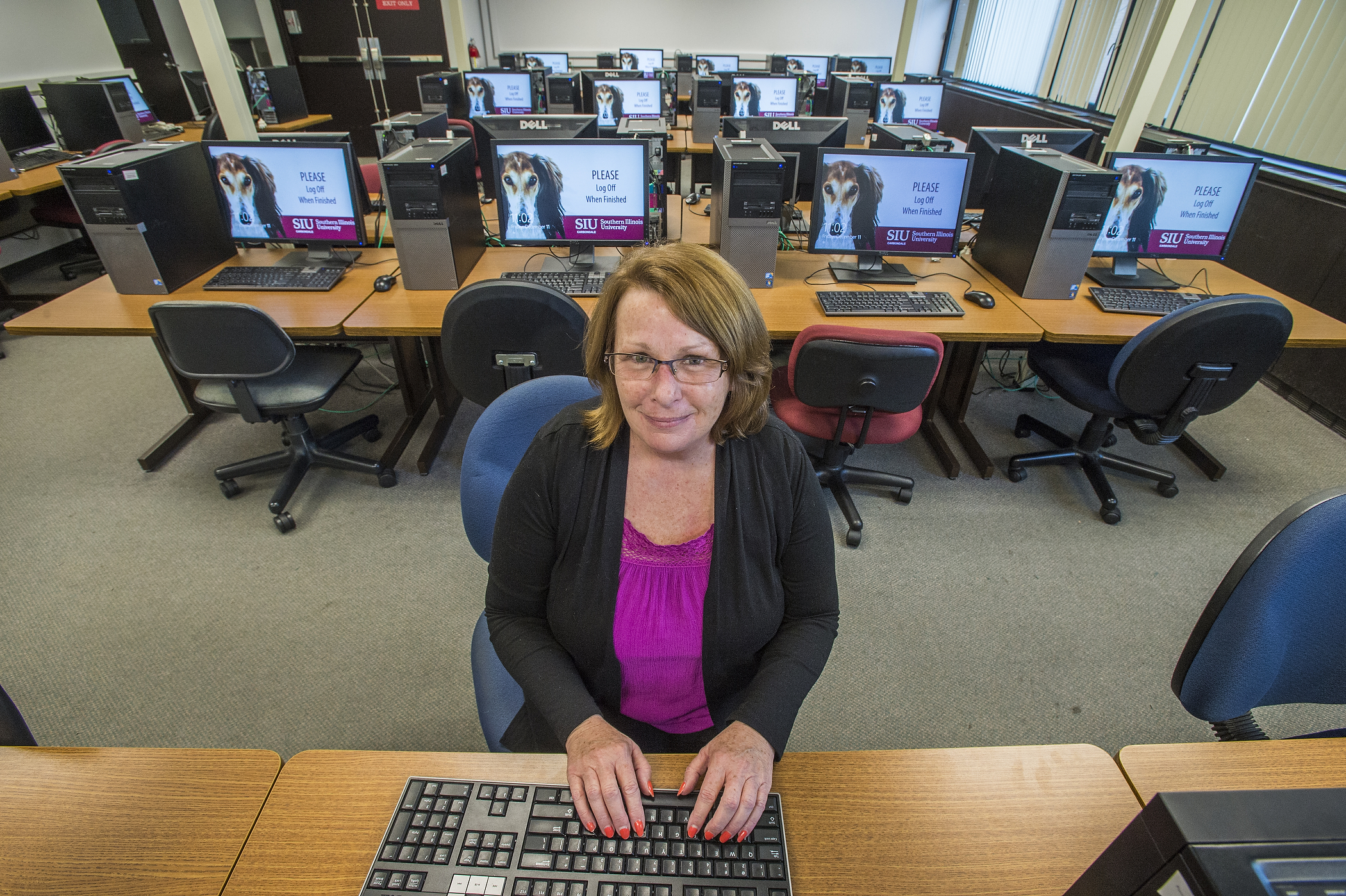 CARBONDALE, Ill. -- Kim Kennedy had her life all planned out. She enjoyed working with the public in physically demanding jobs and she planned to continue until retirement.

Then life happened.  In fact, in the last few years, “life” has happened in a number of challenging ways for Kennedy. But when she crosses the stage to get her diploma at Southern Illinois University Carbondale on Saturday, Dec. 19, she is confident that walk is the next step toward the new future she envisions.

Turn the clock back to 2010. The Marion woman had divorced and was happily selling shoes in a national retail store. Then came the after-Christmas sale when people were battling to get those $100 shoes for $10.  Kennedy suffered a back injury requiring surgery. Her doctor told her that her days of physically demanding labor were over.

“I’ve done every type of job. I’ve led a very full life. But, to change and find a job that didn’t involve manual labor, I was stuck. You want to be responsible for yourself. You don’t want to rely on others,” Kennedy said.

With the self-deprecating humor she so often displays, Kennedy said she decided being a brain surgeon wasn’t in the cards for her. But, she had served an internship a few years before at the St. Louis Dream Center, a Christian inner-city ministry organization, and gotten to do a little computer work and really enjoyed it.

Previously, “I could barely turn the computer on,” she said with a chuckle. But, she wondered if computers could hold the key to a new career for her. She returned to school, earning her associate degree at John A. Logan College in Carterville despite her doubts. She said one of her instructors there apparently noticed the ‘”deer in headlights look on my face” and told the class that it is never too late to pursue your dreams, that you can do anything you want, regardless of age. Kennedy took the advice to heart, and then immediately continued her education at SIU. She is earning her bachelor’s degree in Information Systems Technologies this weekend.

Stepping on campus as a non-traditional student was a little intimidating at first, Kennedy admits. Her fears quickly vanished when she connected with Non-Traditional Student Services and Director Deborah Barnett.

“If it weren’t for Deborah and that office, I don’t know if I would have made it. She is such a blessing. She took time to meet with me, walk me through my schedule and show me where every classroom was, where the elevators and easiest access were and so much more. She’s a great support system,” Kennedy said.

Kennedy has also enjoyed the morning coffees and lunch gatherings the office hosts for non-traditional students. She is appreciative of the resources at SIU and the community that she’s learned about through the office and of the connections she has formed with other students.

Faculty and staff have been helpful and Kennedy’s daughter, Melissa Gooch, and grandchildren Londyn, Alana and Cedric have been very supportive as well, she said. The grandmother of three even got a job on campus. Since August 2014 she has been a lab assistant in the Computer Learning Center Lab at the College of Applied Sciences and Arts. It’s a job she loves because it allows her to help others with their computer needs and problems.

“I really want other people to succeed as much as I want to myself. I feel like I’m everyone’s grandma.  I’m so proud of my fellow students, no matter what age they are,” she said.

Her supervisor and co-workers say Kennedy’s abilities and attitude make her a real asset to the lab.

“She’s really good at helping the students and the faculty. Her computer skills are excellent and she’s really fun to be around. She has a good sense of humor and she especially makes the younger students feel comfortable,” Randy Greer, data network specialist for Information Technology, said.

“Her final semester was already going to be hectic and stressful before her diagnosis. But, she’s been a real trooper through the whole thing. She’s handled everything without missing a beat,” Greer added.

That diagnosis he’s referring to?  That’s another of those “life happens” things, as Kennedy calls them. The first day of the fall semester, she was diagnosed with breast cancer. While undergoing daily radiation (which continues until January), she has kept up with her classes, continued working about 20 hours weekly, and still made time for family.

“Like other non-traditional students at SIU, Kim’s dream of earning her college degree and her own determination served as the catalysts to keep her moving forward despite challenges,” Barnett said. “Kim has overcome many obstacles, with the biggest being her cancer diagnosis this fall. But she is a fighter and she will persevere and overcome. She is a great example of the commitment many non-traditional students demonstrate, even when balancing multiple responsibilities and life challenges.”

Kennedy said SIU has given her an education that goes well beyond the impressive academics. It has given her lifetime learning lessons, encouragement, and the assurance that the only consistent thing in life is change. She has learned peace and contentment.

“I had it all planned out but things didn’t go according to plan,” she said. “But, that’s okay. I can just be happy in life. It’s not a condition that has stipulations. I’ve learned later in life that I can just be content, no matter what. I’m a good team player, a hard worker, and I’m comfortable being the harmony in life. I don’t have to be the top dog. But, I’m 55 and I’m graduating! How exciting is that? I wouldn’t have changed a thing.”

“The students and other people I work with are some of the finest people I know. They’ve been really good to me. Many people at SIU are great. I am truly going to miss this place. I’m a cheerleader for SIU. I’m a passionate person. I’m passionate about my country and I’m passionate about this university. I would like nothing more than to work for SIU after I graduate,” she added.

She is job hunting, hoping that the cancer “life” thing, which she is confident she’s beating, doesn’t hinder her prospects, because, “I have the ability and desire to help others and I sure hope someone gives me the chance!”