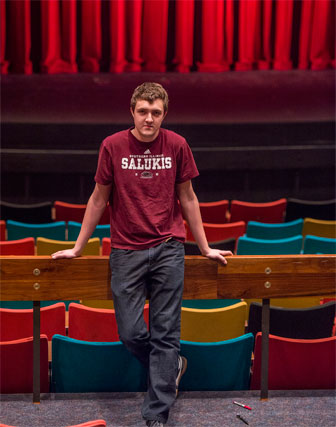 CARBONDALE, Ill. – When Kyle Ludwig arrived at Southern Illinois University Carbondale as a theater student, he expected hands-on learning and out-of-the-classroom experience. He didn’t necessarily think that would include an “all-nighter” spent building a set for a science-fiction film.

“We were working on the set for ‘Vera,’ a science-fiction film for the Department of Cinema and Photography,” he said. “It’s a good memory: the accomplishment of finishing the job, the camaraderie – and just the idea of being up at 3 a.m. building a space ship.”

Ludwig is from Sigel. He grew up on a farm, from which his father is retired. His mother is a retired teacher and librarian, and a collector (and player) of “many musical instruments.” So SIU was about perfect, geographically – close enough to get home but yet far enough away for some distance.

For Ludwig, the hands-on learning at SIU started early. He applied for a scholarship with the Department of Theater. The day he was on campus auditioning for it, he spotted a notice for the McLeod Summer Playhouse and thought he’d like to apply for a summer job. He won the scholarship and got the job; his summer before freshman year he was a carpenter with the playhouse.

“That first summer with the McLeod Summer Playhouse was really fun,” he said. “It was my first summer stock (theater job) and my first time away from home.”

Ludwig is certainly not a guy to sit around idly. The summer after his freshman year he began working with Glimmerglass Festival in Cooperstown, N.Y., and he’ll head there again after he graduates on Saturday, Dec. 19. He made the Glimmerglass connection through SIU, specifically now-retired theater faculty member Bob Holcombe and former graduate student Jake Josef, formerly Glimmerglass’s technical director. Ludwig will be lead carpenter beginning on Jan. 9.

“The Glimmerglass Festival is known for its world class opera and musical theater,” he said. “It has a long tradition of professionalism. I’m excited to continue working there, and honored to take the position of lead carpenter.”

However, he said, the job is seasonal. He’ll start looking for a permanent position, such as scene shop supervisor, and he’s considering graduate school as well.

Ludwig said his SIU experience gave him a well-rounded approach to theater production. “At SIU, you get the chance to look at the production process through a variety of lenses,” he said. “Diverse experience, that’s what helps you to examine what you really want and how to be the best at what you do.”

He said he learned that “being a leader” involves more responsibility than he expected – but his leadership roles in the theater shop have contributed to friendships he hopes will last his lifetime.