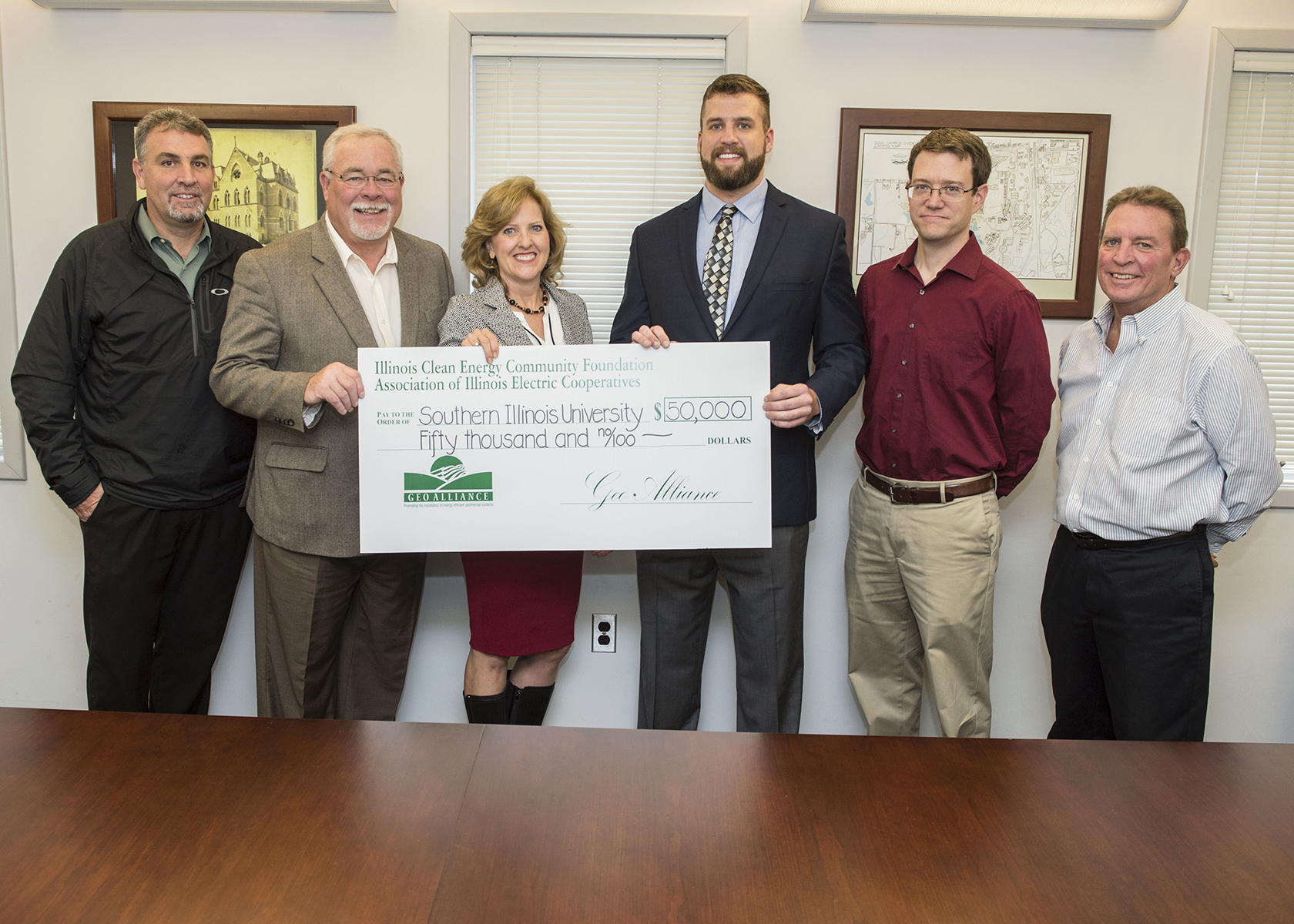 This is the third grant the university received from the GeoAlliance program, which was funded through the Illinois Clean Energy Community Foundation (ICECF), and administered by the Association of Illinois Electric Cooperatives (AIEC). During the 12-year, $1.5 million program, SIU Carbondale received $150,000 for its projects. The other two geothermal projects at SIU that each received $50,000 in grant funding were the McLafferty Annex Building in 2005 and Stone Center in 2012.

“We are front-runners and try to be green, be sensitive to the environment and utilize university resources more efficiently. The university’s strong relationship with ICEFG has allowed us to promote geothermal systems for local school districts, churches and small businesses that can learn from our experiences.”

GeoAlliance funding was passed down from the AIEC to Illinois electric cooperatives, which re-granted it to qualifying members who receive electricity from them. Egyptian Electric Cooperative Association (EECA) in Steeleville/Murphysboro is the electric provider for the university. Bryce Cramer, co-op district office and member services manager, stated that cooperatives have been involved with residential geothermal installations for about 30 years.

Cramer stated that commercial applications, such as those at SIU Carbondale, are important because they demonstrate how geothermal technology can be used effectively and efficiently in industrial-scale projects.

“These types of installations can be more complicated than for homes, but the benefits far outweigh any issues that arise, he said. “That’s why the university stepping out in the forefront and doing this is really making it much easier for a lot of other people to do it.”

Gatton said another benefit of geothermal systems is being able to evenly regulate building temperatures during changing seasons for the comfort of students, visitors, faculty and staff.

Geothermal heat pump systems use the earth’s natural energy and that’s why they are so efficient and so inexpensive to operate. During cooling months, the buildup of heat and humidity from inside a building is transferred into the earth through tubing in the ground.  During the heating months the process is reversed. There is no combustion with a geothermal heating system, but a modest amount of electricity is used to operate the circulating pumps, fans, controls and compressor, which along with the heat exchangers are the major components of the geothermal heat pump.

The geothermal system was installed in the 187,000-square-foot Transportation Education Center to serve the facility’s office and classroom space, roughly 49,000 square feet. The building’s service lab area, which houses teaching laboratories and support areas for the aviation and automotive technology programs, operates with a central chilled water/heating hot water system. The projected annual cost savings for that portion of the building is $9,700.

The estimated annual savings for the former McLafferty Annex, which is undergoing transformation into the McLafferty Research Building, has been just over $24,500; retrofitting Stone Center with a geothermal heat pump heating and cooling system saves roughly $14,400 annually.

“I wouldn’t have thought 10 years ago we could accomplish this many large geothermal projects,” Gatton said. “I think we were all looking at it as being a potential option, but we couldn’t overcome the installation issues associated with it. The money provided the incentive to see this is a viable technology for the university to take advantage of and utilize in many of our campus buildings.”

Nancy McDonald, marketing administrator at the AIEC, said the GeoAlliance grant program, which is now closed and won’t be renewed, funded 51 separate projects throughout the state. In addition to the SIU projects, the program provided grants to not-for-profit and public entities such as churches, schools, universities, a historical museum in Savanna, and a small fire protection district in Quincy.