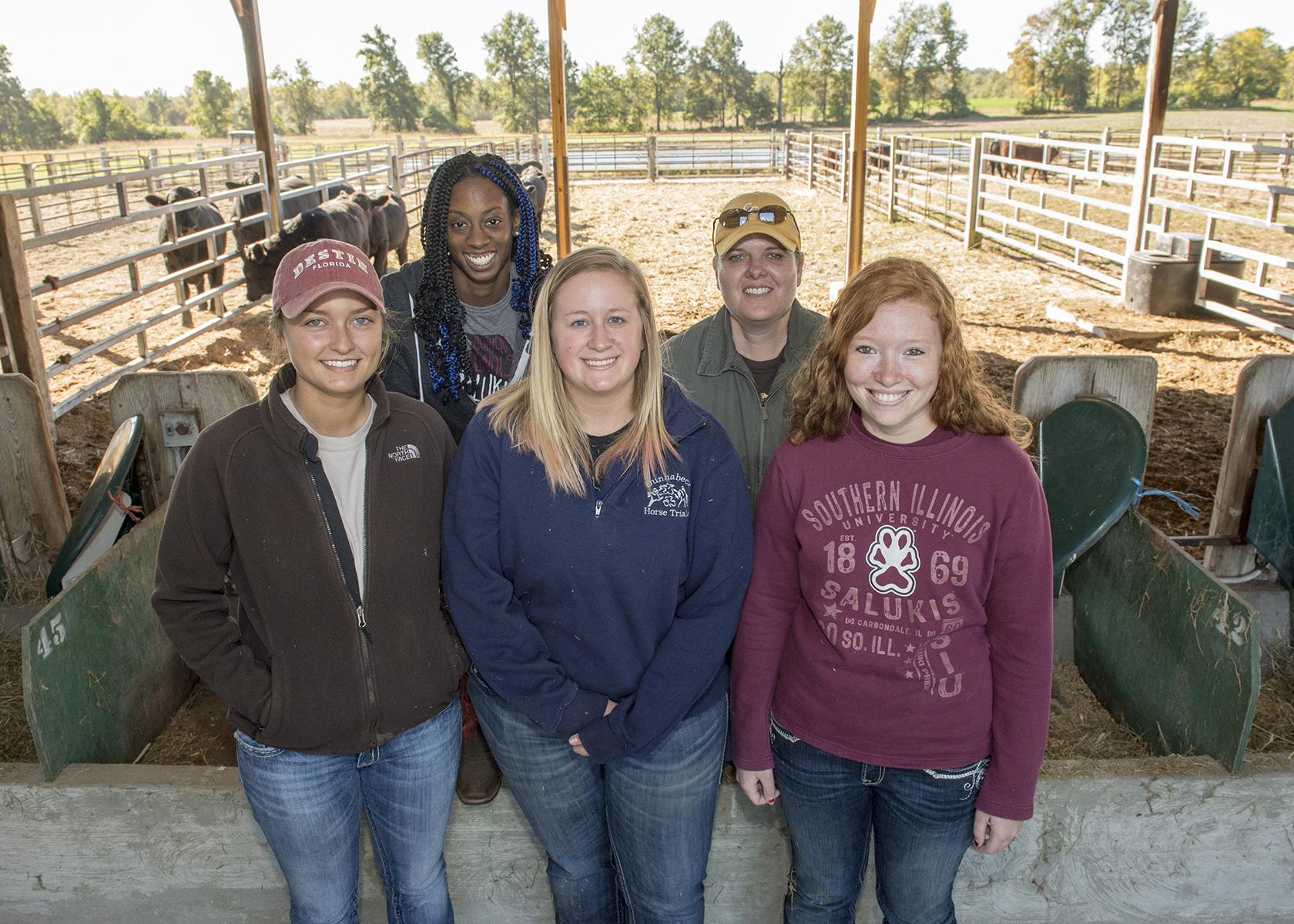 Rebecca Atkinson, associate professor of animal science, food and nutrition, shown in the back row, right, is leading a student crew at the SIU Beef Evaluation Center, also known as the bull test station. With her are: back row – Alexis Johnson (Springfield, Tenn.) and front row from left – Megan Tockstein (Odin), Claire Hoffman (McHenry) and Alissa Hoyt (Carrolton).  (Photo by Russell Bailey)

CARBONDALE, Ill. – The pens are full of young bulls and that means one important thing for area cattle buyers and breeders: The annual performance-tested bull sale is back on at Southern Illinois University Carbondale for the first time in two years.

The sale is set for March 11, 2016, and will include an online video auction option. Sale details will be forthcoming from University Communications and Marketing or by contacting Rebecca Atkinson at ratkinsn@siu.edu. Atkinson is an associate professor of animal science specializing in beef cattle.

This year, the university accepted 40 bulls on commission, most of them junior bulls. Junior bulls are typically about seven months old and weigh about 500 to 800 pounds on arrival. A junior bull is typically 1,200 to 1,400 pounds by the spring sale. Senior bulls are larger and are usually just over a year old when they come to the SIU Beef Evaluation Center, also known as the bull test station.

The bull test station team is student-run this year, with Atkinson providing advisory oversight and hands-on training. The objective is to test the bulls’ potential for producing superior calves that will grow fast and efficiently.

One of the most important tests is for “true feed efficiency,” Atkinson said. The team weighs each bull when it arrives and once every 28 days for 84 days, which is when the test ends. The test helps determine average daily weight gain. Weight gain of about four pounds a day is a good rate, Atkinson said. Weight gain is a measure of potential to grow quickly, but in addition, feed efficiency is more economical for the beef farmer and contributes to sustainable farming practices.

The formula for figuring feed efficiency includes the amount of feed consumed divided by the average daily gain. “Ideally, you want this ratio to be low because it is the pounds of feed it takes for the animal to gain one pound of weight,” Atkinson said. “The test station also tests for residual feed intake, which is a more accurate way to determine the bulls’ feed efficiencies.”

Atkinson noted the team feeds the bulls a measured feed portion, and that the bulls are free of growth-hormones.

Other tests include frame scores, pelvic measurement, breeding soundness exam and carcass evaluation through the use of ultrasound. The ultrasound test is used to evaluate back fat, intramuscular fat and the “ribeye” area. In addition, each breed association has its own standard to determine EPD, expected progeny differences, or other factors besides feed efficiency and ultrasound testing to determine the animal’s potential as a sire.

To be eligible for the program, bulls must be registered with a recognized national breed association, come to the facility in good health and meet other criteria set by Atkinson and the bull test station advisory board.

The student team will have the opportunity to learn to handle large livestock and assess animal health. Each bull is fitted with a magnetic collar that, when in close proximity to its assigned feed stall, unlocks the door. This helps the team ensure that each bull receives only its measured portion of grain. In addition, the student team will learn to conduct the ultrasonic tests and to conduct the scheduled weigh-ins.