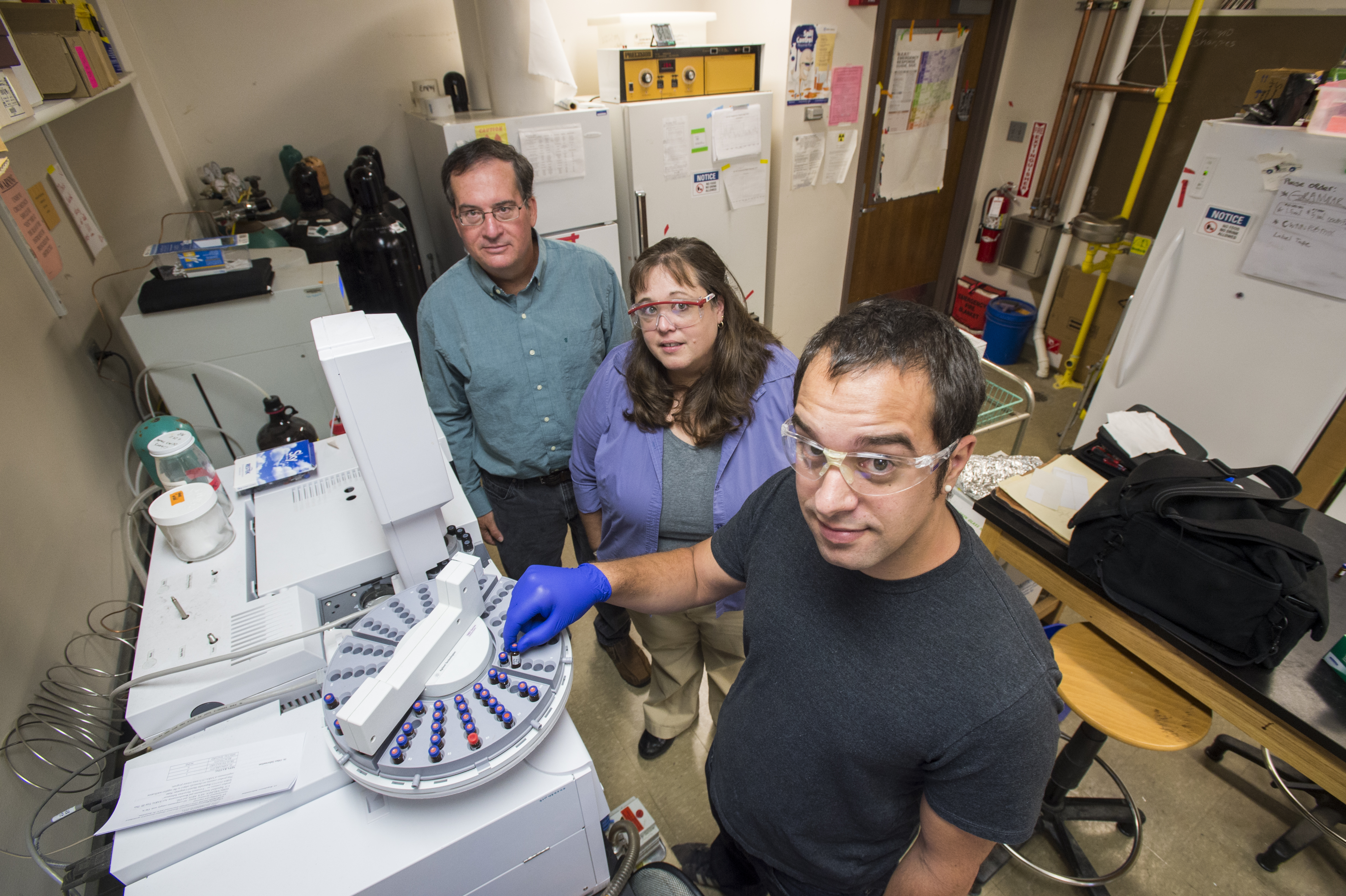 Keeping water clean -- Michael Lydy, left, professor of zoology at Southern Illinois University Carbondale, works with two members of his research team who will participate in a major study of insecticide contamination on the east coast. Lydy, along with graduate student Sam Nutile and Kara Huff Hartz, assistant scientist, will use a $250,000 federal grant from the U.S. Geological Survey’s National Institute for Water Resources to help study this problem and its cascading effects. (Photo by Steve Buhman)

CARBONDALE, Ill. – Urban lawn aficionados take note: Those BB-sized granules you spread on your grass a few times each year that you think are just fertilizer probably come with the added “bonus” of insecticide granules, just one of which is enough to make toxic as much water as an Olympic-sized swimming pool.

Toxic, that is, at least as far as the Hyalella azteca is concerned. The tiny creature, no bigger than the point of a pencil, is a major food source for many species living in and around water sources such as ponds and streams. And if frogs, fish and birds eat toxic Hyalella, there’s a good chance the poison will accumulate in them, too.

A researcher at Southern Illinois University Carbondale will use a new federal grant to help study this problem and its cascading effects – such as Hyalella becoming resistant to common insecticides, and surprising problems that creates – during the next three years.

Michael Lydy, professor of zoology, recently secured a $250,000 grant from the U.S. Geological Survey’s National Institute for Water Resources to help its researchers take a closer look at insecticide pollution in urban water sources. The USGS ranked Lydy’s proposal as one the top four out of 101 it received nationwide for the current fiscal year.

Lydy’s team, which will include a research scientist and several graduate and undergraduate students beginning next summer, will be taking and analyzing sediment samples from 70 different urban locations on the east coast. They will look for evidence of pyrethroids, the No. 1 class of insecticide used in the world today, and run tests using tiny, polymer-based beads that bind with such contaminants to determine how much is bioavailable in the water for animals, such as the Hyalella, to take in.

Lydy and his team also will look for Hyalella at the sites, bringing samples back to the laboratory and testing whether they have developed similar resistance to such chemicals the way researchers have observed in some populations on the west coast. If they find resistant populations they will send them to collaborators, who will examine their genetics to better define what is happening.

Animals developing resistance to insecticide is not a new phenomenon, but it holds special ramifications in the case of the Hyalella, Lydy explained.

“It’s a life form in particular that researchers use as an indicator of a relatively clean and healthy environment,” Lydy said. “But if you have a population that are resistant to pyrethroids – and we’re talking 500 times more resistant – then the environment you’re looking at may indeed be contaminated with pyrethroids, only you would not know it.”

Also, research scientists such as himself keep and raise populations of Hyalella to use in experiments. Such laboratory populations must be infused with new, wild-caught Hyalella every so often to ensure genetic diversity is maintained in the population.

“So if we’re out catching some in the wild and we end up getting a resistant strain and they breed with our lab populations, we’re going to get inaccurate, biased results,” if they are used in toxicity experiments, he said.

Pyrethroids are a nerve agent that opens and keeps open transmission pathways, ultimately killing the animal. In cases of resistant populations, research has shown the animals have evolved a physical change in the nerve receptor that is affected by the chemical, making it impossible for it to attach itself. Another way populations can become resistant is by changing how the chemical is metabolized.

“We know from earlier studies that the receptors have changed in resistant populations. We will now be looking to see if the metabolism has been altered, too,” Lydy said.

Much of the work, however, will involve analyzing how much insecticide is in the sediment as well as moving freely about in the water, where small animals can take it into their bodies. To do this, Lydy and his team will rely on tiny, rough-surfaced, plastic beads known as Tenax, a porous polymer resin that can absorb the chemical much the way a sediment particle would.

“Essentially the Tenax is a sphere with lots of pores,” Lydy said. “So when chemicals desorb from the sediment they get into the water around it, what we call the pore water. At that point, an animal can take the toxin up and we can see a toxic effect. The Tenax measures that freely dissolved phase and acts as a surrogate for the bioaccumulation potential or the toxicity.”

Tenax provides some great advantages over testing for toxicity using live animals such as Hyalella, Lydy said. For one thing, a Tenax test, in which the beads are placed in a vial with the sediment and water sample and spun on a rotator before being chemically analyzed, can be completed for a few hundred dollars, whereas testing with live animals can take up to 28 days and cost $10,000 or more. Previous studies show the Tenax does a very good job accurately reflecting the chemical concentration in an animal based on its exposure in the water and sediments.

The team will look at the toxic parameters of pyrethroids and relate them to key phases of the animals’ lives, such as growth, ability to reproduce, as well as at what point it will becomes lethal to the animal, which in this case includes Hyalella, midges, bivalves and fish. They will also relate their Tenax concentrations to the USGS toxicity values and develop a new model comparing Tenax values to the toxicity values.

With samples from 70 sites to analyze efficiently with this method, Lydy is excited about what the effort may uncover.

Although many might associate insecticide pollution caused by overuse with heavy agriculture, Lydy said his experience does not support that idea.

“These chemicals are expensive, and after talking to many farmers I can tell you they try very hard to use no more than they absolutely need,” he said.

Instead, much of the problem might be traced to urban use of such products that contain pyrethroids. The effects of just a few granules of a pyrethroid such as bifenthrin, a popular insecticide for domestic use, that hit the driveway or sidewalk instead of the lawn, and subsequently are washed into the storm sewer, can be devastating to wildlife.

“Bifenthrin is incredibly toxic and will kill half the Hyalella population in a water source at a concentration of just 1 part per trillion, which is like taking a few granules of fertilizer containing bifenthrin and throwing it in a water source bigger than an Olympic sized swimming pool,” Lydy said.

“So we’re going to look at the east coast and urban areas there to see if similar problems exist there,” he said. “We’re finding a lot of the issues are urban problems and not agricultural. An earlier study by the USGS looked at seven metro areas and found the No. 1 problem was pyrethroids killing things you don’t want it to kill, like arthropods. These are little animals that crawl around on top of the sediment and act as a food source for many species.”

Participants will begin taking samples next summer, continuing the sampling and analysis for the next three years.