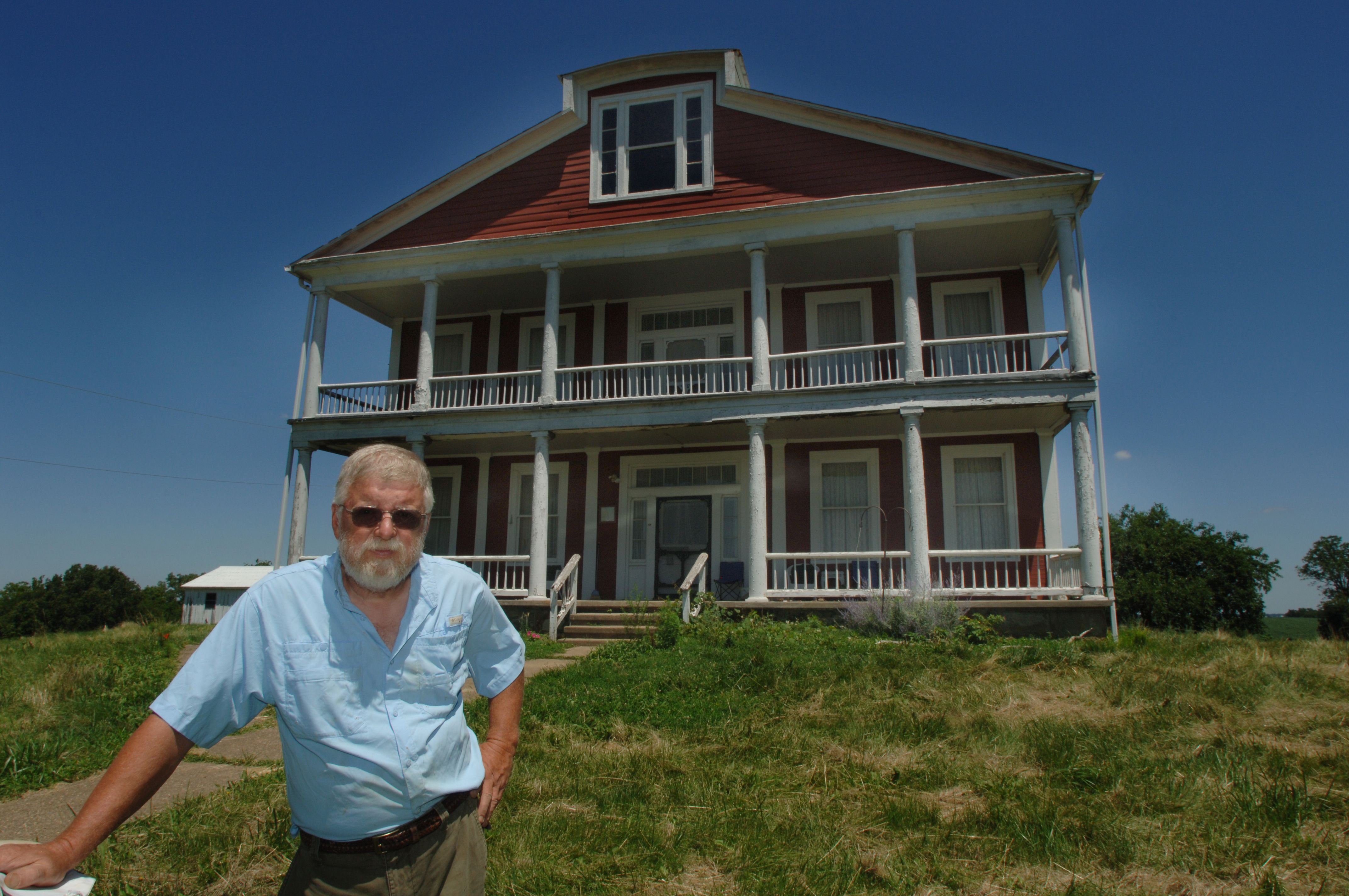 Mark Wagner, director of the Center for Archaeological Investigations at Southern Illinois University Carbondale, with the Crenshaw House in the background. Wagner led an archaeological team excavating the yard surrounding the Crenshaw House for the Illinois Historic Preservation Agency. The site is formally known as the Hickory Hill Historic Site, and locally as The Old Slave House. (Photo by Jeffrey Garner)

CARBONDALE, Ill. – Whatever else might be said about him, John Crenshaw was proud of his outhouse.

“Privies were usually just holes in the ground in his day,” Mark Wagner, director of the Center for Archaeological Investigations at Southern Illinois University Carbondale, said. “He made his of stone blocks – it was probably something people talked about. We found mirror glass in the privy vault, so it seems he hung a mirror in it. It was very fancy. I’ve never dug anything like it.”

The Crenshaw of privy fame is also the Crenshaw of Old Slave House infamy. Wagner led a team of archaeologists to find out a few things no one knew about the Illinois historic site – namely, what and where were the outbuildings?

He completed his final report for the Illinois Historic Preservation Agency this month. The State of Illinois owns two acres of the original 10,000 that made up the John Crenshaw estate, located near Equality in Gallatin County. The preservation agency maintains the site, which is currently closed to the public. Wagner said the state has considered opening the house and grounds as an interpretive center.

The site’s official name is the Hickory Hill State Historic Site, from the Crenshaw family name for the estate. The name by which it is known regionally – the Old Slave House – refers to Crenshaw’s nefarious reputation as a kidnapper and illegal slaver. Popular legend has it that the house itself was even the scene of a slave-breeding operation.

Wagner’s focus, however, was not the inside of the house, but outside it and the yard. An estate the size and value of Crenshaw’s had outbuildings, but none have survived, not even in photographs or other representations of the house and grounds. Finding the outbuildings that existed in Crenshaw’s day gives a more complete picture of the historic site.

The team used remote sensing during the early stages of the investigation, including ground-penetrating radar, electrical resistance meters and a magnetometer. This equipment, and digging sample cores, contributed to the discovery of the layout of the house’s yard – including the fancy privy.

“We might have dug for days and still missed some of what we found with the remote sensing,” Wagner said.

The team found evidence of a dirt cellar that was likely part of servants’ quarters, the outline of the original garden, a summer kitchen, a well, a carriage drive and a find that contradicts the legend – a back porch immediately behind the house and constructed with it.

Local legend credits Crenshaw with contributing to a “reverse Underground Railroad.” Crenshaw allegedly used a carriageway that went right into the back of the house to bring in free black people his thugs kidnapped from the North. Crenshaw is said to have smuggled his captives across the nearby Ohio River to Kentucky to sell them down the river into slavery.

Wagner said historians have uncovered evidence that Crenshaw faced charges of kidnapping at least four times. He was acquitted in all four cases, but in at least one case – that of a woman named Maria Adams – he was popularly believed to have been involved.

However, the presence of the back porch, and the uncovering of the carriageway, indicate that carriages pulled up to the back porch in plain sight – in other words, not for smuggling but for elegance and convenience. Wagner said the finding doesn’t exonerate Crenshaw nor does it necessarily salvage his reputation. It does, however, indicate that the house itself is not likely to have been used the way local legend tells.

Crenshaw seems, also, to have been a fastidious and somewhat house-proud man. In addition to his ostentatious privy, he was meticulous in keeping his yard neat. That means artifacts from his time are scarce. Some of the most impressive finds are pieces of copper-trimmed ironstone plates from the Edward Walley pottery in England, which the team excavated near the dirt cellar that might have been servants’ quarters. Wagner thinks possibly the Crenshaws followed the fairly common practice of passing used dishes to a particularly faithful servant when the family acquired a newer set.

While Wagner and his team were exploring the yard, architecture experts explored the inside of the house, including the infamous third floor. The third floor, popularly believed to be haunted, was divided into a series of small rooms. These rooms were supposedly a holding facility and sometimes part of a slave-breeding operation.

The investigation, however, does not support that legend either. Robert Swenson, a retired architecture professor at SIU, removed paint and wood samples from the attic rooms and found they had been constructed and finished the same time as the lower floors of the house. A 3D reconstruction shows that the third floor was decorated much the same as the rest of the house as well. Crenshaw seems to have modeled the interior to resemble the small cabins on a steamship. He may have had plans to take in travelers from railroad traffic, but his ambition seems not to have matched the actual traffic.

“We can’t say no one was ever held there against their will,” Wagner said. “But that’s not why the third floor was built that way – we can say that.”

Charles “Chuck” Swedlund, a former photography professor at SIU, also had a keen interest in the third floor. He cataloged historic graffiti on the walls, including poems and dated messages written by teenage girls in the mid-1800s.

Wagner likened the graffiti to the autograph books that were popular at the time. “They don’t seem to be afraid to be in the third floor of the house,” he said. “They are using the house as an autograph book, writing poems and drawing flowers and hand prints.”

A particular anomaly was that the girls wrote down their ages and weights. Wagner said it’s likely they’d gone to the coal mine near the property and gotten weighed. They were excited about it, it seems, because they’d never before known what they weighed.

“The attic has become a record of who was there,” Wagner said.

There are no immediate plans to ready the site for public use. Wagner noted, however, people are interested in the site and its history.

Enter Richard Kuenneke, a filmmaker and former instructor in SIU’s Department of Radio, Television and Digital Media Specialization, who documented the archaeological dig throughout its three years of activity. He’s finishing up the editing now, and hopes to make the film available through public television.

“We needed some public outreach,” Wagner said. “People were interested in what we were doing, but, because the site is closed to the public, they were not allowed to visit the site during the excavations. A video documentary is one way for people to see what we did and what we discovered at the site.”

The film includes images of the artifacts, the excavation and the interior of the house. Both the report and the documentary are currently under review at the Illinois Historic Preservation Agency. The report is a public document and will be available in the future, probably as a .pdf document. The Crenshaw House group hopes to make the video documentary available to public television next year, pending approval from the preservation agency. 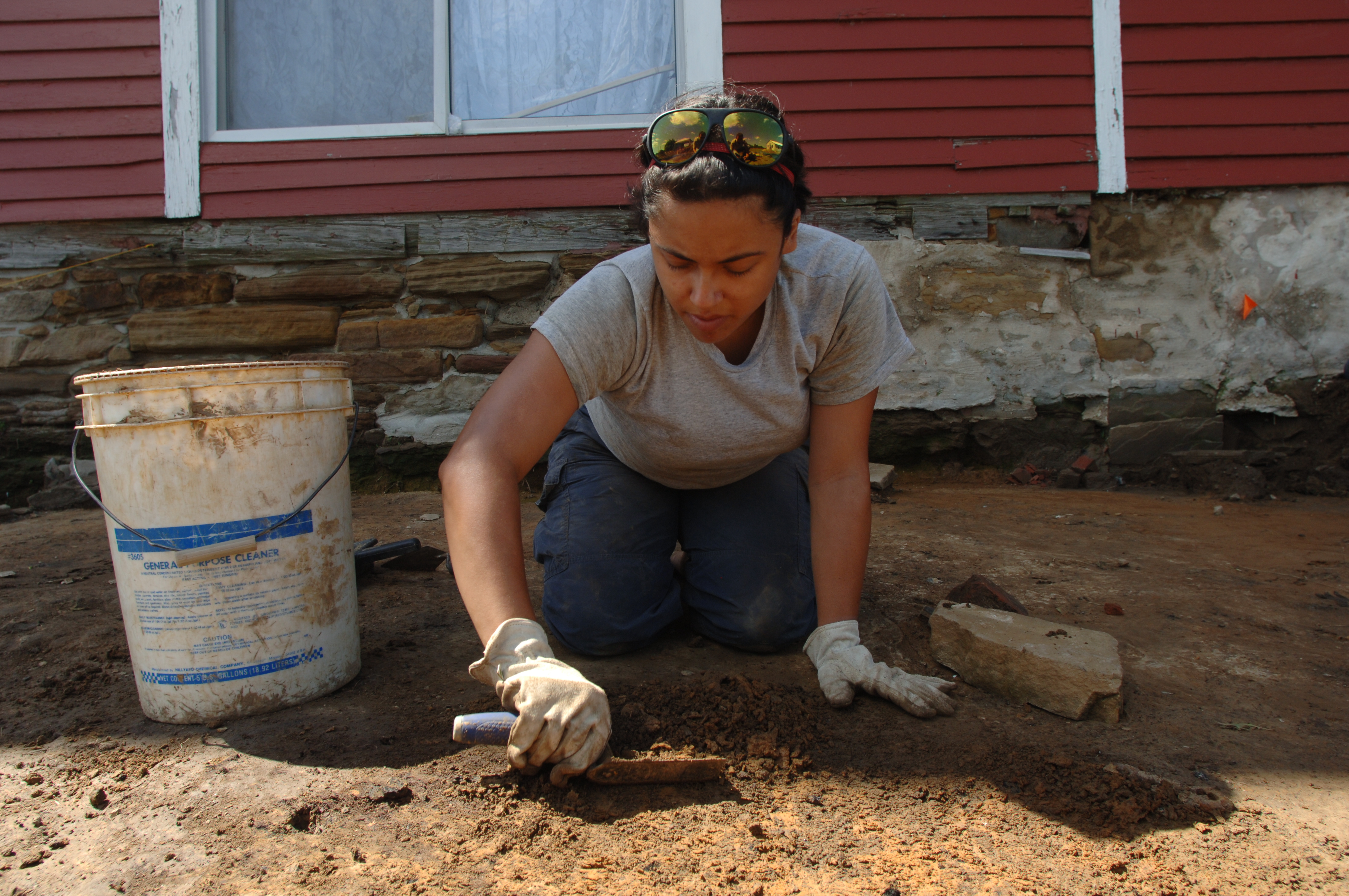 Eraina Nossa, an SIU alumna who is now a federal archaeologist for the Mark Twain National Forest in Missouri, was part of the Southern Illinois University Carbondale – Center for Archaeological Investigations team excavating at the Crenshaw House in Gallatin County. She was working on the foundation of an original back porch that seems to have been attached to the house during John Crenshaw’s time. The team also found the remains of a semi-circular cinder drive in the back of the house. (Photo by Jeffrey Garner)

Eraina Nossa, an SIU alumna who is now a federal archaeologist for the Mark Twain National Forest in Missouri, was part of the Southern Illinois University Carbondale – Center for Archaeological Investigations team excavating at the Crenshaw House in Gallatin County. She was working on the foundation of an original back porch that seems to have been attached to the house during John Crenshaw’s time. The team also found the remains of a semi-circular cinder drive in the back of the house. (Photo by Jeffrey Garner) 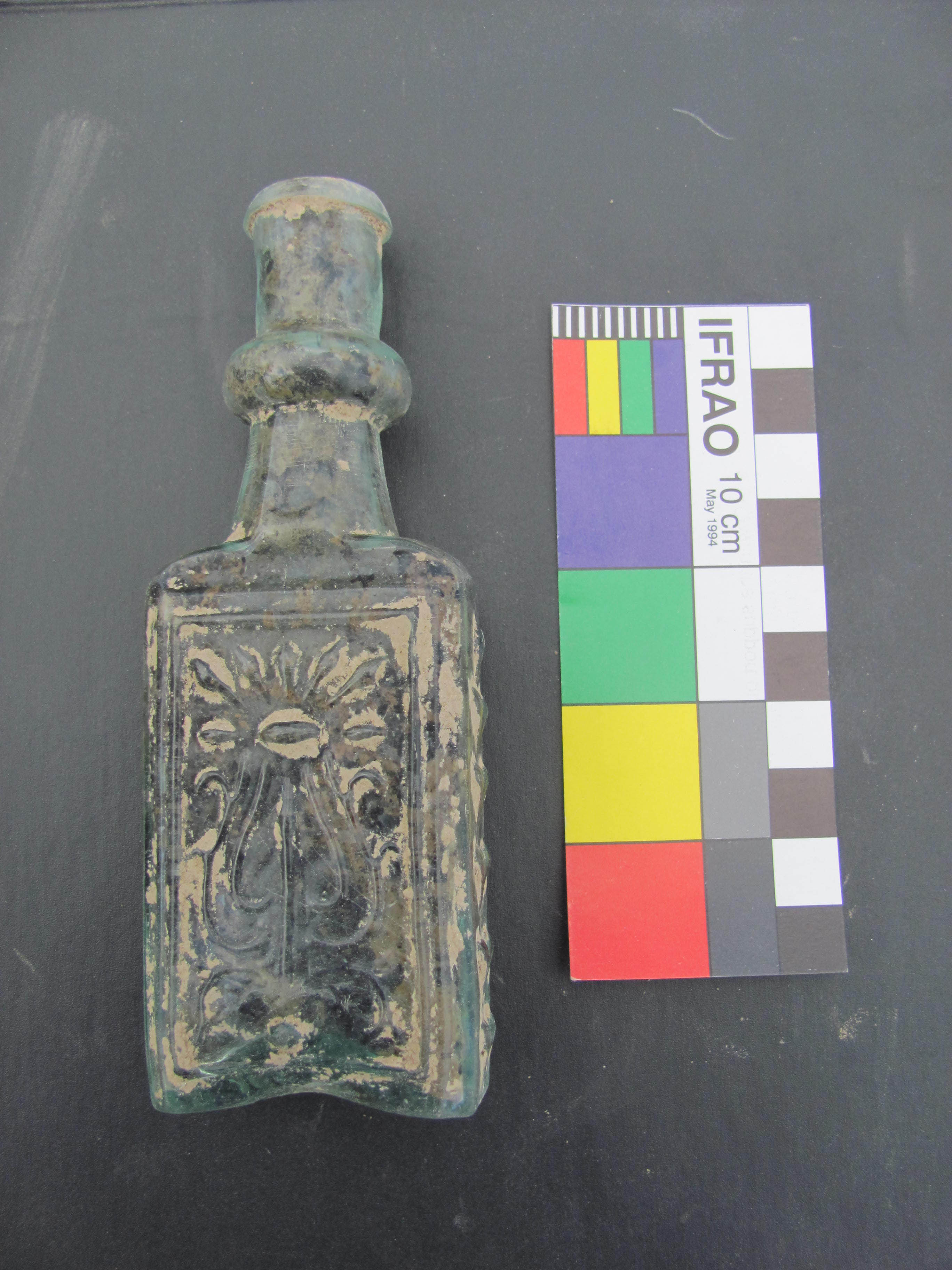 The archaeological team, under direction of Mark Wagner, director of the Southern Illinois University Carbondale’s Center for Archaeological Investigations, collected artifacts from John Crenshaw’s day during their work at the historic site. This is a cologne bottle, retrieved from the stone-walled privy the team located and excavated in the yard. (Photo provided)

The archaeological team, under direction of Mark Wagner, director of the Southern Illinois University Carbondale’s Center for Archaeological Investigations, collected artifacts from John Crenshaw’s day during their work at the historic site. This is a cologne bottle, retrieved from the stone-walled privy the team located and excavated in the yard. (Photo provided)