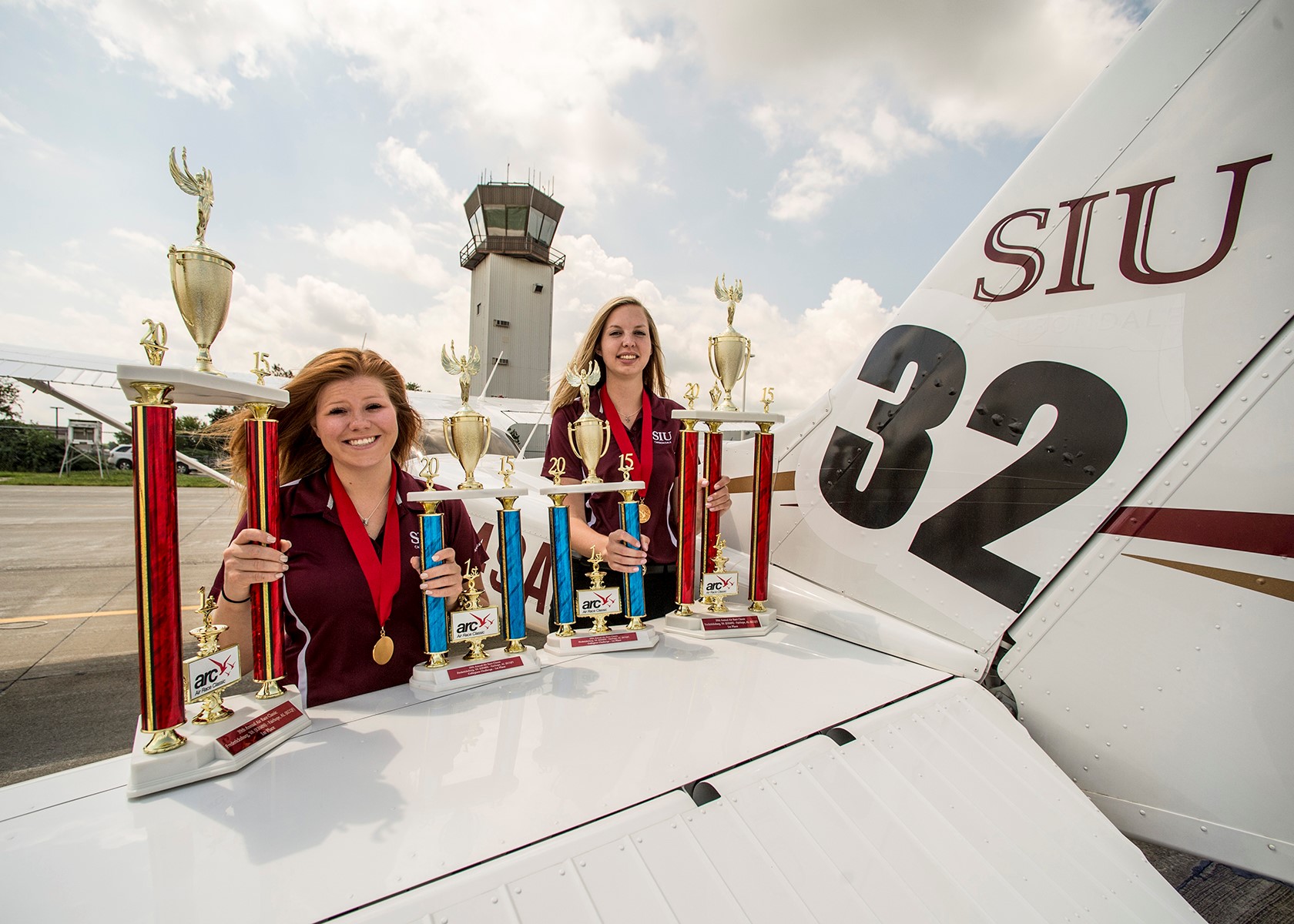 Air Race Classic champions -- Southern Illinois University Carbondale’s Jessica Reed, left, and Stephanie Armstrong, right, with their trophies and the plane the two used to win the All Women’s Cross Country 2015 Air Race Classic, June 22-25. The title is the first in SIU history. Reed is a senior in aviation management from Schaumburg; Armstrong, a May 2013 aviation management graduate from Seneca, is an assistant instructor at the university. (Photo by Russell Bailey)

Jessica Reed, a senior in aviation management from Schaumburg, and Stephanie Armstrong, a May 2013 aviation management graduate from Seneca, won both the collegiate and overall title in the 39th annual event, June 22-25. The title is the first in program history; SIU also entered teams in 2010 and 2011.

The event covered nearly 2,200 nautical miles with nine legs. Scores are based on a plane’s projected versus actual timed performance. The event continues a tradition started with the 1929 Women’s Air Derby, where famed aviator Amelia Earhart and 19 other female pilots flew from Santa Monica, Calif., to Cleveland, Ohio.

Reed and Armstrong have been flying together for about two years. Reed flew about 85 percent of the event; Armstrong handled navigation and communications and took over flying for the timing flybys and landings. The flybys mark the official start and stop times for each leg of the trip's departure and arrival.

Leading up to the event Reed said she and Armstrong joked about winning the title or “taking it all home.”

“When we made it to Virginia I was very nervous realizing how many of the women racing this year had already done it before -- some for upwards of 20 years,” said Reed, who will earn her degree in August. “While we were flying the race we were the No. 2 team into Fairhope, Ala. I feel that really showed our drive and motivation to win.”

The most challenging part, in addition to heat in the cockpit, was performing the flybys at each stop. Reed said that staying on altitude “when you are so low and it is bumpy is very stressful and definitely not the situation we are used to.”

Armstrong said the win is “indescribable.” Winning the title as first-time racers is almost unheard of, she said. Armstrong is an assistant instructor and assistant coach with the Flying Salukis.

Fifty-four teams competed for the overall title, including 17 collegiate teams. The event began in Fredericksburg, Va., and ended in Fairhope, Ala. A second SIU team made up of Sarah Demkovich, a graduate assistant from Algonquin, and Emily Frasca, a May 2015 graduate in aviation management from Champaign, was 24th overall and seventh in the collegiate division.

John K. Voges, interim chair of the Department of Aviation Management and Flight, said completing the race is “like a marathoner crossing the goal line.”

“To complete this race and place is amazing. To win this race, be first in the collegiate category and also be the first place team overall is nothing short of spectacular,” he said.

Voges said the program is proud of both teams who competed.

“It is a testament to the many years of study, preparation and skill-building that allowed them to excel during this competition,” he said. “I am especially pleased that they will be able to pass the lessons and experiences they gained during this competition on to future students. There is no doubt they will serve as role models to other young female aviators who will follow their footsteps in our program and perhaps on to another Air Race Classic victory.”