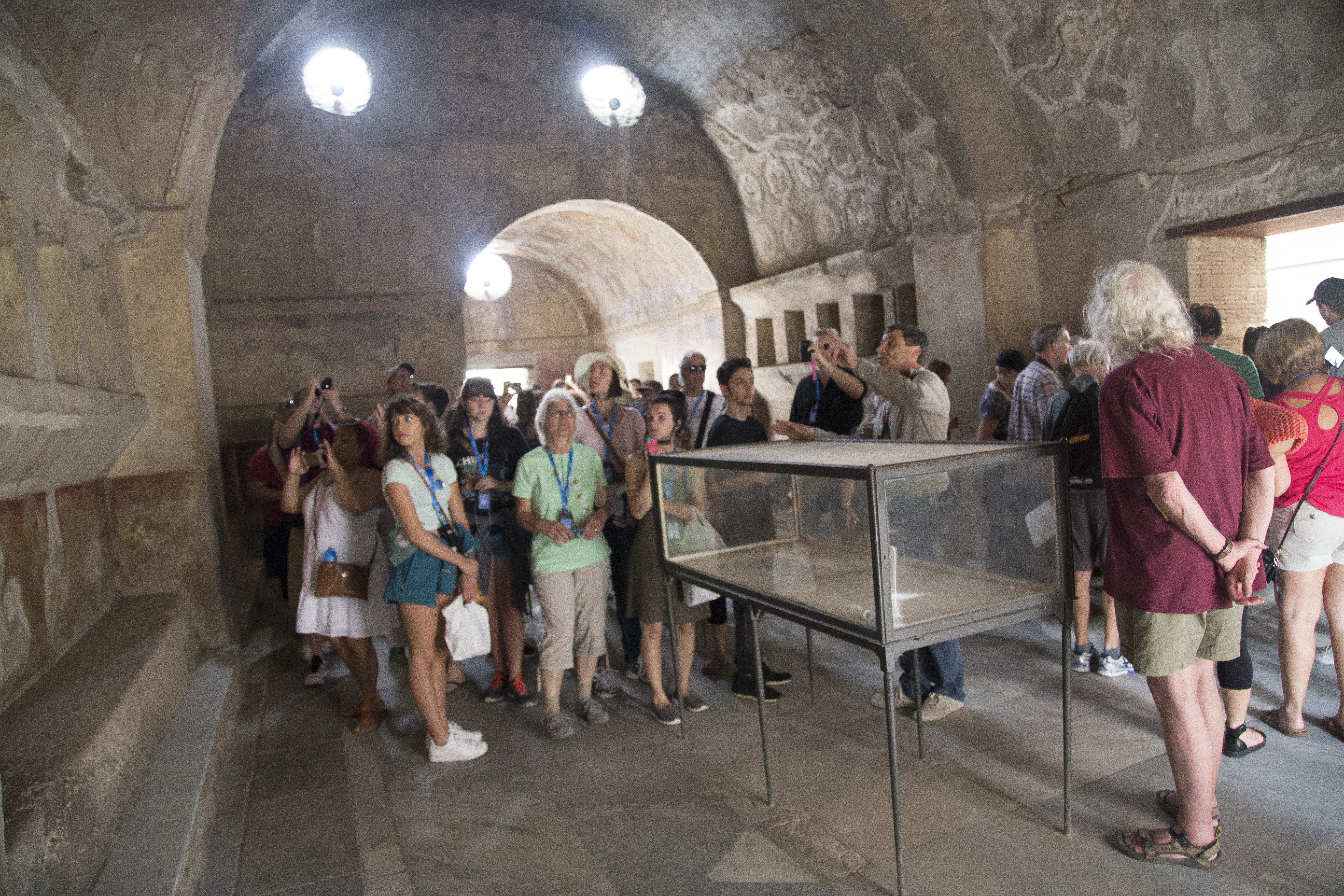 Visiting Pompeii -- A group of seven students and Jon Davey, a professor from Southern Illinois University Carbondale’s School of Architecture, visit what were the city’s public baths during the study-abroad program’s recent journey to Italy, Greece, the Greek Isles and Turkey. (Photo provided)

CARBONDALE, Ill. -- For nearly 30 years, Jon Davey, a professor in the Southern Illinois University Carbondale School of Architecture, has taken students on a journey that goes beyond a building’s four walls.

The participants in the annual travel study program recently returned from a two-week visit to Italy, Greece, the Greek Isles and Turkey. The “Le Petit Grand Tour D’Architecture,” or “The Little Grand Tour of Architecture,” gave students insights into historic sites, architecture and the culture. The students receive from three to six credit hours.

“Travel is a hands-on learning experience that you can’t get from reading a book,” Davey said. “You can’t get it from sitting behind a television set, or seeing a PowerPoint presentation of a three-dimensional reality of buildings and architecture on a two-dimensional screen. You can’t smell it, touch it, feel it, hear the noise or get your feet wet.”

Cuba, Egypt, India and the Dominican Republic are just a few of the international extension sites of Davey’s annual travel studies program.  In its 27th year, the program is open to all students and alumni, with three to six credit hours available.

Kenwin Jones, a senior majoring in cinema and photography from Black Jack, Mo., said the photographic opportunities to update his portfolio prompted his decision to take the trip. Jones said the history was most interesting.

“It still amazes me how old the historic places we visited were, and the impact its architecture and culture has had on different areas of the world,” he said. “I would definitely recommend this trip to anyone who wants to explore, learn and engulf themselves within a culture different from their own.”

The locations in Italy included Rome, Vatican City, Florence, Sorento, and Pompeii; in Greece, the visit included Delphi, Athens, and the Mikonos Islands. In Turkey, the group visited Kusadasi and the ancient city of Ephesus, once the trade center of the ancient world. There were also stops in Patmos, Crete and Santorini. Davey said it is important students are able to utilize their senses, such as the sites, smells and sounds found inside a Greek restaurant.

The variety of experiences students gain is important in their education, he said. Architecture students have cried upon walking into the Pantheon in Rome because of its beauty, Davey said.

The course “open their eyes to the world around them; that there are other people and other experiences that can enrich their lives,” he said.

Kenneth Boeser, a project design principal with The Haskell Company in Jacksonville, Fla., is working to fulfill a three credit hour elective for his Master of Architecture degree, which he expects to complete in December. He earned his bachelor’s degree in architectural studies from SIU in 1990.

Boeser said the age difference between himself and other students on the trip provided varying perspectives and differing expectations and interests. He said Davey “did a great job of keeping it interesting for both” age ranges and was able to point to critical spots of interest and facts that enhanced the trip. Boeser said he was able to visit many of the places he had always wanted to see.

The trip gave many of the students a “good cultural awakening” since many may not have traveled outside the United States prior to the trip, Boeser said. It gave them a “unique opportunity to peer into current civilization, its history and relevant art and architecture.”

Plans are for trips to Cuba and Europe over the next two years, Davey said.