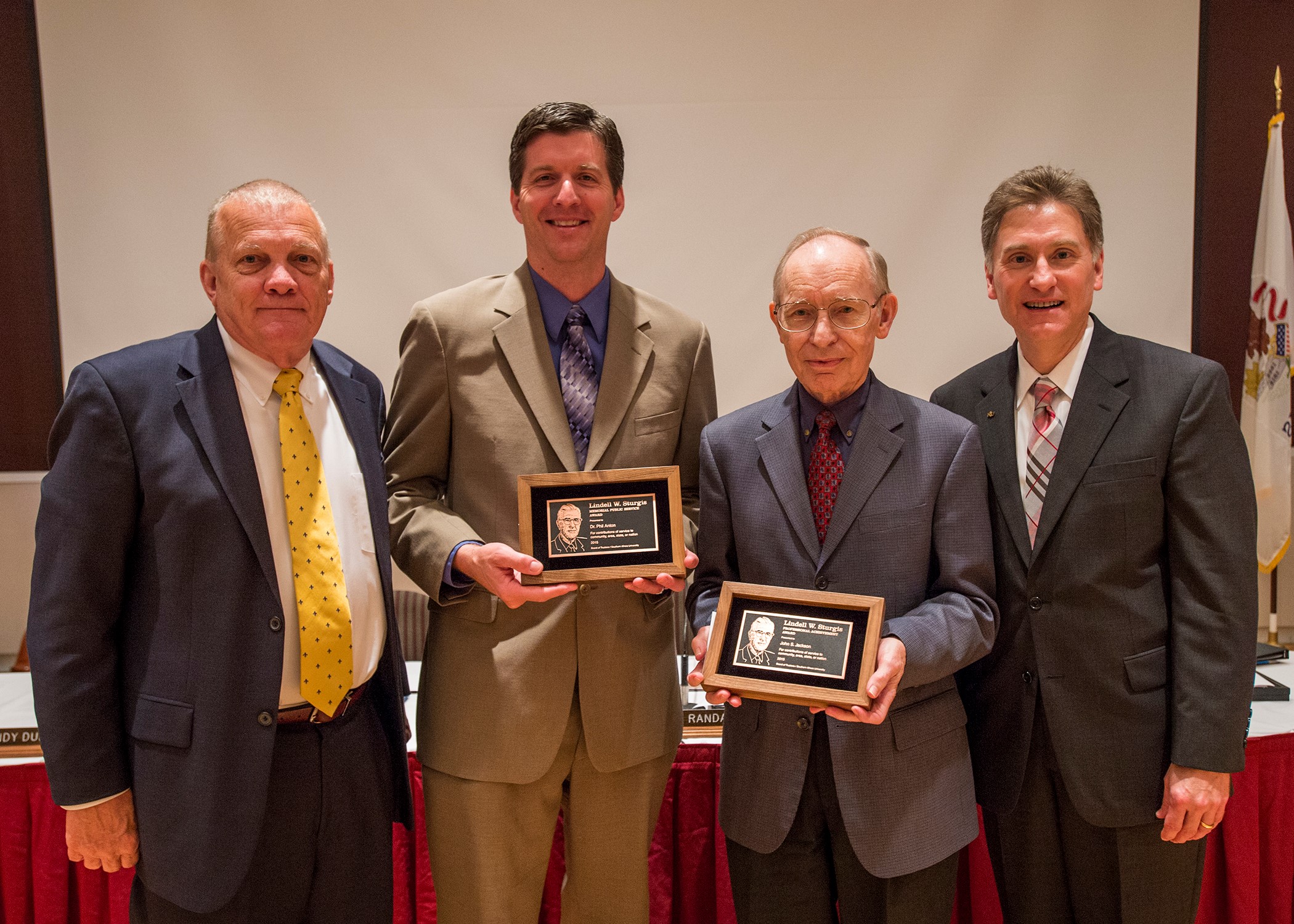 The SIU Board of Trustees today (May 14) presented the awards to Phil Anton and John Jackson during its regular meeting.  Anton, an associate professor in exercise physiology in the Department of Kinesiology, received the Sturgis Memorial Public Service Award; Jackson, a visiting professor with the Paul Simon Public Policy Institute, received the Sturgis award for professional achievement.

The annual award, presented by the board since 1980, recognizes SIU Carbondale employees for public service unrelated to their jobs.   The award honors Sturgis, a Metropolis native who served more than 30 years on the SIU Board, including as chair from 1969 until retiring in 1971.  Sturgis passed away in 1972.  The award carries a $750 cash prize.

Anton is also a member of the Strong Survivors/SIH Foundation fundraising team; a charter steering committee member of the annual Southern Illinois Men’s Health Conference; organizer and supervisor of the women’s and men’s health conferences fitness screening staff, and a community representative to the SIH Institutional Review Board. Nationally, he is involved with the Midwest chapter of the American College of Sports Medicine and the American College of Sports Medicine. His involvement with the American Cancer Society has included serving as the SIU Carbondale chapter advisor for Colleges Against Cancer; the Relay for Life planning committee, and the organization’s Southern Illinois chapter leadership board. He also was a charter member of the Healthy Southern 7 Region Coalition.

Bobbi Knapp, an assistant professor in the Department of Kinesiology, wrote in her nomination letter that in meeting people in the “Strong Survivors” program, either as a cancer survivor or as a caregiver, the conversation always turns to Anton and his positive impact on their lives.

Several cancer survivors also wrote about Anton’s work, including as a mentor who offers emotional and physical support, and who works tirelessly to make sure they are “accommodated, supported, connected and nurtured.”

“He’s invested in this community and it shows,” wrote Catherine Caldwell, who connected with the Strong Survivors program in January 2010 after her diagnosis. “He has a passion for life and lives it with gusto. I certainly benefit from the fact that his personal passion is cancer awareness and education. It’s not a ‘job’ for him; it’s his life, his true heart.”

Rebecca Cerven was in Anton’s second “Strong Survivor” class in 2006 and became involved with his “Survivors Forever” program when it began in 2009.  If not for the two programs “life would simply be a lot harder for many of us,” she wrote.

Cerven also praised the undergraduate and graduate students who participate in the program under Anton’s direction. Students realize that participants may have multiple complex conditions directly or indirectly affected by cancer, requiring them to “search even deeper to find a ‘safe’ regimen” for patients. In her six years in the “Survivors Forever” program, Cerven writes that her student trainers honed “critical skills such as sensitivity to the uniqueness of each patient situation; increased their ability to problem-solve, develop and then adapt regimens to fit ever-changing needs.”

Anton and his wife, Julie Partridge, an associate professor in sport and exercise psychology, live in Murphysboro. He is “surprised and humbled” to receive the award.

“I had looked at the list of past winners before my nomination was submitted and was pretty sure I didn’t even come close to the accomplishments of anyone on that list, so I was a bit shocked when I got the call,” he said.

Anton’s extensive involvement in cancer rehabilitation and cancer-related endeavors honors the memory of his cousin and best friend, Julie Honerkamp, diagnosed with a sarcoma in her knee at 14 years old; Anton was 15 at the time. With each surgery and chemotherapy or radiation treatment, family and friends hoped the disease was beaten, but Honerkamp died after a five-year fight. Anton was a sophomore at Alma College in Michigan when he received a call from his mother that the end was near for his cousin. He drove through a late spring snowstorm and arrived at the hospital in Chicago in time to see her before she passed away.

“Her struggle and indomitable spirit made me want to do whatever I could with my life to honor her memory,” he said.

Over the years, he volunteered for Relay for Life and Race for the Cure events, making donations when he could. When Anton was accepted into the doctorate program in the School of Sport and Exercise Science at the University of Northern Colorado, he learned of the school’s Rocky Mountain Cancer Rehabilitation Institute (RMCRI). Dr. Carolyn Dennehy, who co-founded the institute, told him how RMCRI students served as personal trainers and assessment administrators for program participants, using exercise as a therapeutic tool to help cancer survivors get through their treatment and recovery period, he said.

“It was a classic ‘light bulb’ moment, where all the planets aligned,” Anton said. “This was a chance to pursue my keen interest in exercise and health, and combine it with a method to help cancer survivors who were experiencing the quality of life detriment that my cousin experienced. After a few weeks in the program, I knew that I wanted to pursue cancer rehabilitation as an avenue for research, but more importantly, for service.”

Student involvement is “everything to programs” such as Strong Survivors, Anton said. The students’ “extensive involvement” helps the program serve “many, many more survivors and caregivers in Southern Illinois than would be possible if they weren’t so generous with their time volunteered for the program.”

Anton said when he first arrived in Southern Illinois he was at a point where he needed to collect information for his dissertation project. Southern Illinois Healthcare, John A. Logan College, and the Department of Kinesiology department collaborated to start the first Strong Survivors class in 2005.  The free program has since expanded to include caregivers, established the SIU Carbondale Cancer Rehabilitation Laboratory and the “Survivors Forever” component.

“While it is an invaluable piece of my professional life, I value the personal connections with the program participants even more highly.  The emotional lift that I get from Strong Survivors is beyond description,” Anton said.

Jackson, well-known nationally and locally for his political insight and work, has held myriad positions since coming to SIU Carbondale in 1969 as a lecturer while completing his doctorate from Vanderbilt University. Jackson, who retired in 2001, has served the university in a variety of capacities, including interim chancellor, vice chancellor for academic affairs and provost, dean of the College of Liberal Arts, associate dean and acting dean of the graduate school.

In his nomination letter, John L. Foster, emeritus faculty in the Department of Political Science, wrote that Jackson has more than 20 years as a university administrator, achieved national recognition as a political science scholar, and is “one of the finest classroom instructors on campus.” Foster also details Jackson’s other contributions; notably his work with the Paul Simon Public Policy Institute; the Fulbright Summer Institutes on American Government for international faculty or undergraduate students, and numerous service organizations and politically affiliated activities.

Foster and Jackson have collaborated on the summer institutes program since its inception in 1993. The 17th program later this year will bring to 322 the number of people who have participated with a little more than $3 million in external funding coming to SIU Carbondale.

Among his service organization work, Jackson has been a board member of the Alzheimer’s Association of Southern Illinois, the American Red Cross and the Center for Rural Health and Social Service Development.

“A former colleague once told me John was a ‘tower of strength and voice of reason’ on every departmental committee they jointly served on,” Foster wrote.  “Certainly few in our community can match his public service.”

Glenn Poshard, former U.S. congressman and retired SIU president, echoed those sentiments. Poshard wrote that many times when he faced a “critical vote” he would talk with Jackson, who helped him examine the issue “from all points of view and generally helped guide me to work with other legislators on both sides of the aisle to form a consensus position which benefitted the great majority of the people.”

“No one with whom I have associated in my entire career has given me more sound advice that John. Nearly everyone I’ve known in elective office has sought John’s counsel,” Poshard wrote.

Jackson is also the author of two recent books, “The Essential Paul Simon,” published by SIU Press in 2012, which is an editing of Simon’s works, and “The American Political Party System: Continuity and Change over 10 Presidential Elections,” published by The Brookings Institute in fall 2014. That book examines how the nation’s government became divided and polarized and the impact on the political system and presidents who are trying to get their respective agendas adopted.

Jackson was surprised with the nomination, saying he never believed he would receive the honor.

“I’m pleased and honored to receive this outstanding award,” he said. “I am particularly glad to join the ranks of many fine colleagues who have received this award in previous years.”

“There isn’t a week that goes by without some former student just “dropping by” to visit with John,” Yepsen wrote. “The conversations are lengthy and a sign many of our current political and business leaders are still taking advantage of John’s insight and wisdom into the university, the region and politics.”

While Jackson received offers for other job opportunities elsewhere throughout his career, he found that after weighing all the options, he always felt most comfortable in Southern Illinois. Jackson and his wife, Nancy, live in Carbondale, where they raised two children, Jeff and Jill. Jackson said that each of his posts at SIU helped “reinvigorate” him.

Jackson said he saw the importance of public service through his father, who was a water and street commissioner and his mother, who was U.S. Postal Service clerk in the small town of Waldo, Ark., where he grew up.

“You have to have public sector employees and people who volunteer to do things for a community for the whole thing to work together for the common good,” he said. “I think going into political science was a part of that conviction.”

Jackson regularly provides political expertise for local media programs and is “fascinated by politics and the next election or the last election.” He arrives to work by 7:30 a.m.; the interaction with colleagues and students keeps him active in his field and “always learning new things about politics and government,” he said. Jackson is a “firm believer in the ‘life-long student’ concept.”

“It is always a challenge to keep up with what is going on in Springfield and Washington, D.C., and what does it mean. Those are the things that fascinate me to try and translate for the public,” he said.