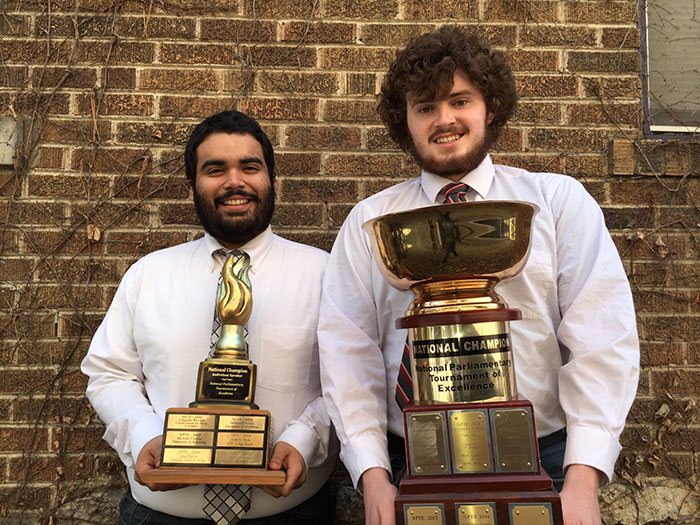 Todd Graham, award-winning director of the SIU debate program, noted that collegiate parliamentary debate actually has two national championships, representing different formats within the tournaments. He said the NPTE is the more elite of the two because only the top-ranked teams may compete. SIU has been involved in the tournament for many years. This victory makes SIU national champions for the third time in eight years, with winning teams in 2008, 2013 and now this year.

Josh Rivera, a senior from Chicago majoring in political science, was a member of the 2013 team. This year, he also received the title of “Best Debater,” so-named by the coaches’ poll at the tournament. Last year, Rivera was part of the team that won the National Parliamentary Debate Association Nationals (NPDA), the other of the two collegiate parliamentary debate national championships. His partner this year and throughout the team’s successful season, is Zach Schneider, a senior from Great Mills, Md., majoring in computer science. This year, the two of them placed second in the NPDA tournament, held March 14-17 – the week immediately preceding the NPTE tournament.

“The NPTE uses a double-elimination format – a team loses two debates before they face elimination,” Graham said, explaining a reason he and many other directors of debate prefer the NPTE to the NPDA tournament. “We feel like the cream always rises to the top in this tournament. If a team has one bad debate, they are not eliminated.”