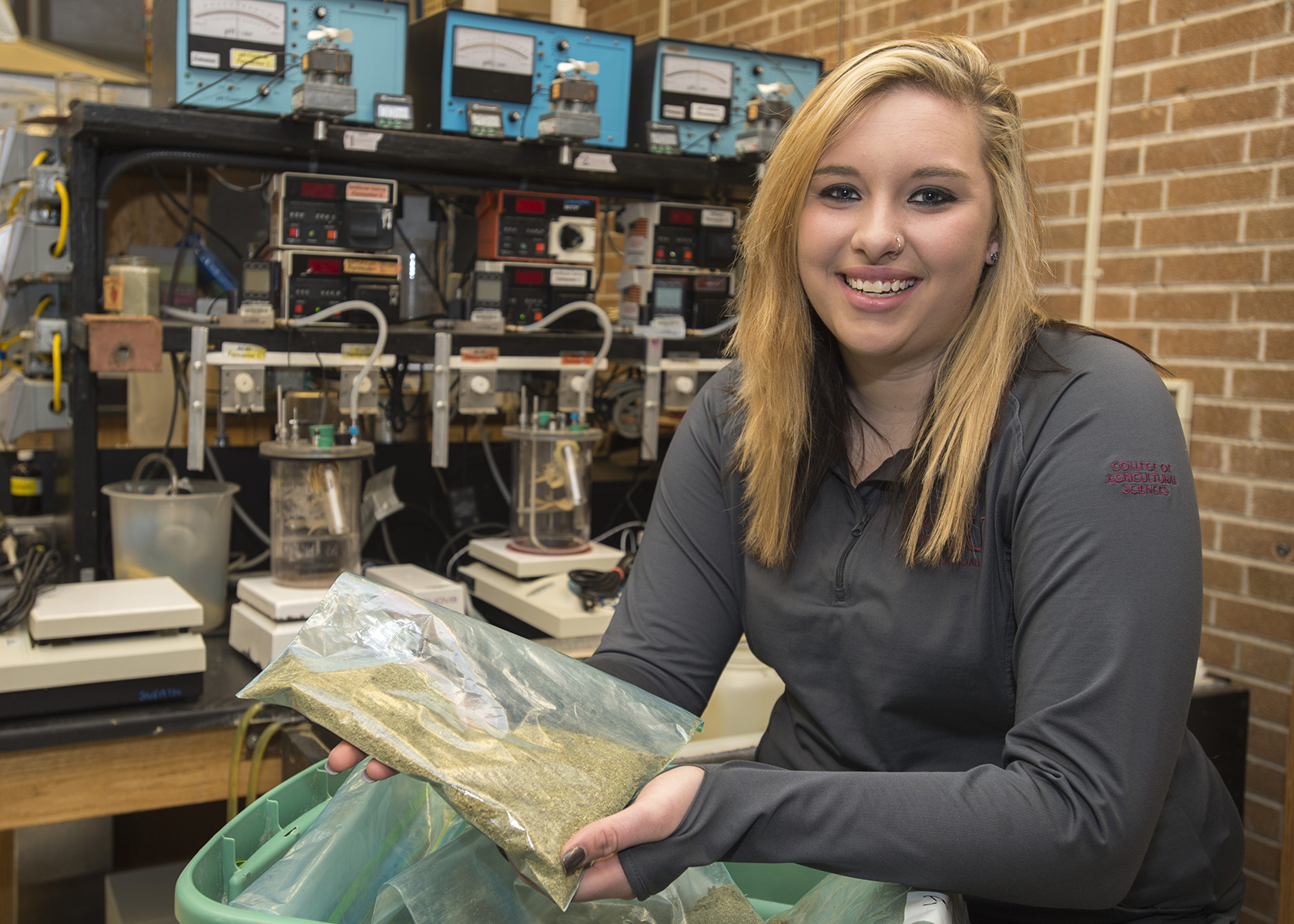 Lacey Armitt, a senior from Carbondale majoring in animal science, holds a sample of the research material she’s been working with -- freeze dried rumen fluid. She is working with Rebecca Atkinson, associate professor of animal science, on a digestibility study pertaining to beef cattle and small grains forage grazing.   (Photo by Russell Bailey)

CARBONDALE, Ill. -- Lacey Armit knew she’d learn all sorts of things when she undertook her first major research project as a sophomore at Southern Illinois University Carbondale -- like, for example, how to laugh at herself. It’s a skill that’s come in handy, even as she has honed her expertise in collecting data and making sense of it.

Armit, a senior animal science major from Carbondale, is currently engaged in a digestibility study with cattle. In an earlier stage of this project, she worked with the university’s cannulated cattle – beef cattle with a “window” in the rumen of their digestive track – collecting samples of rumen fluid. She fed the samples to the fermenters in an animal science lab -- fermenters that are modeled after cow rumens. The rumen is the first compartment in a cow’s four-compartment stomach.

“I had to go feed my laboratory stomachs three times a day,” Armit recalled. “I was feeding them at midnight and checking them at 6 a.m.”

Armit is freeze-drying the fermenter digested samples now, and analyzing them as another step toward determining what nutrition benefits the cattle derive from various sample feeds.

Her first research project at SIU also involved what cattle eat. She conducted a comparative study of small grains that were bred to produce forage rather than grain in a food plot study to determine what forage might work both for extending the grazing season for cattle and for improving deer habitat. This means her food plots were removed from the road and situated back along a tree line. For part of the time, when cattle were feeding on the food plots, an electric fence surrounded the area. That, and cold, icy weather, Armit said, made for some funny moments – which mercifully only she witnessed.

Maneuvering under the electric fence to get to her food plots was one challenge. Another was removing the cameras she’d installed to spy on deer visiting the food plots.

“I had the motion cameras mounted on posts, and sometimes they’d freeze to the brackets. I’d have to remove the camera in order to replace the memory card or the batteries. I’d be out there tugging on a camera, taking off my gloves and wondering why I picked an outdoor research project. There were a lot of moments when I had to laugh at myself.”

And plenty of interesting moments, too. The camera picked up some amusing incidental photos in addition to the ones that contributed to the research project.

“The fawns loved the camera,” she said. “I have a few of baby deer noses, some coyotes, and some close-ups of a bird checking his reflection. I also became familiar with the herd. If I drove by the food plot and saw them in the field, I’d refer to them as ‘my deer’ and recognize individuals – like the buck with the broken antler.”

The upshot of that study was that deer seemed to gravitate naturally toward more nutritious small grains (wheat), while cattle seemed to have particular favorites (rye) they will eat down to the root. However, there is a variety of small grains that do grow later in the season and can extend the grazing season, and that will also benefit deer. Armit presented her findings at the Illinois Louis Stokes Alliance for Minority Participation (ILSAMP) conference in Chicago, and at the undergraduate research forum at SIU.

When she’s not hanging around food plots in cold weather or laboratories, Armit is active as a College of Agricultural Sciences Agbassador, a registered student organization that represents the university at area high schools and assists with college events.