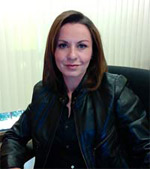 Stella K. Kantartzi, associate professor in the Department of Plant, Soil, and Agricultural Systems and the principal investigator in the Plant Breeding and Genetics Lab, is the moving force behind a new, cooperative research program. The program, developed as part of a memorandum of understanding, or MOU, is between SIU and Aristotle University of Thessaloniki in Greece.

Kantartzi is a three-degree graduate of Aristotle University, and she has maintained a strong relationship with her alma mater. The cooperative agreement between the two universities, signed in 2012, will lead to cooperative research, a student and faculty exchange program, and educational seminars.

Last spring, Kantartzi organized and led a seminar at Aristotle University focused on soybean improvement, production and agriculture technology. The seminar was a preliminary step in establishing a soybean improvement research program at the Greek university. This summer, Kantartzi worked with the university to establish that research program as a sister program to SIU.

At the heart of the program are three elite, non-genetically modified soybean varieties Kantartzi developed during her research at SIU: Saluki 4910, 4411 and 4313. These varieties are notable for their high crop performance combined with high resistance to disease, especially to the soybean cyst nematode, a parasite that costs billions of dollars in agricultural loss nationwide every year.

“These SIU varieties are ready to start their international career,” Kantartzi said.  “We’re setting up the research program now, and we have the support of Greek seed companies that have expressed interest in testing the lines under field conditions, with a goal of possibly increasing the seed and promoting it in a European market.”

Here at home in the Midwest, SIU’s Agronomy Research Center maintains the seed and makes it available to seed and agricultural companies that want to increase the line and release it as commercial varieties.

“I don’t know yet how well these three SIU varieties will perform in Greece, but we are not worried -- we are starting a new research program and we must have a place from which to start. The plan is to develop a ‘twin’ breeding program at Aristotle University. We want to exchange information and find ways to accelerate variety development,” Kantartzi said.

Ultimately, Aristotle University may develop new varieties from the Saluki soybean varieties.  Those new varieties might be co-released by the two universities.  “That is something we may need to think about three to four years later,” Kantartzi said. “Plant breeding is a long process.”

Kantartzi said she is motivated to work on this research partnership not only because of the research and development opportunities, but also because such a research partnership positions SIU to attract promising international students and create new links with agricultural industry partners.