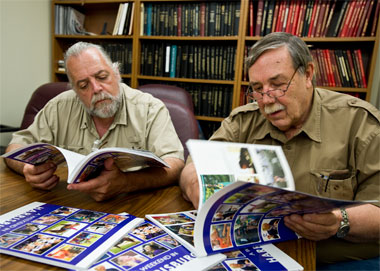 Weekend in Harrisburg -- Mark Dolan, left, an assistant professor and Phillip W. Greer, a photojournalist-in-residence in SIU Carbondale’s School of Journalism, review copies of the latest student-produced publication, “A Weekend in Harrisburg.” The book is the fifth in a series that highlights people in local communities and is the culmination of a three-day photojournalism project last fall. (Photo by Russell Bailey)

CARBONDALE, Ill. -- A book showing the talents of Southern Illinois University Carbondale photojournalism students in capturing the spirit of Harrisburg residents will be available later this week.

A reception for the publication of “A Weekend in Harrisburg” is Saturday, May 17, from 2 to 5 p.m. at the Harrisburg District Library, 2 W. Walnut St.   The 80-page book features more than 200 photos and is the culmination of a three-day photojournalism project in early October.

The book is the fifth in a series that highlights people in local communities. While the approach going into each weekend is similar each book is unique, said Mark J. Dolan, an assistant professor in the School of Journalism who organizes the event. This year, about 35 students, along with 14 visiting faculty, including some of the nation’s leading photojournalism professionals and editors participated.  The project is similar to previous efforts highlighting Murphysboro in 2009, Cobden and Alto Pass in 2010, the Tri-C community of Cambria, Carterville and Crainville in 2011, and Chester in 2012.

“This gives our students a better sense of the communities,” Dolan said.  “What I hope they take from it immediately is the benefit they receive from interacting with professionals and the opportunities placed in their paths.  They have to learn to take advantage of those opportunities and make the most of them.”

This is the second recent book for SIU photojournalism and journalism students involving Harrisburg.  In 2012, students produced “4:56 a.m. The Story of the Feb. 29, 2012 Tornado.”  The award-winning book chronicled the aftermath of storms that tore through Harrisburg and Ridgway that killed eight people and injured more than 100. Six people died when the tornado struck; two others later died as a result of injuries sustained in the tornado.

Eric E. Gregg, former Harrisburg mayor and a member of the Saline County Tourism Board, said “Weekend in Harrisburg” is a “beautiful follow-up to the earlier book.  The collaboration was also a great opportunity to work with the university and Gregg hopes there are more in the future.

“I think it speaks to and demonstrates our resiliency in the short time following the tragedy of the tornado that claimed eight of our precious lives,” Gregg said.  “The book is full of smiles and happiness. It reflects our personalities and friendliness. It is a great snapshot of who we are in Southern Illinois.”

Ian Mullen said the workshop boosted his skills with a camera and as a journalist. In a small town with no leads on what to pursue, Mullen, who recently switched his major to photojournalism, said he found himself  “pushed outside his comfort zone to talk to complete strangers after taking their photos.”

After talking to local residents and explaining the project, Mullen, who is a senior from Eldersburg, Md., said people were receptive and opened their homes to him.  He found an awesome story of a minister and his wife rebuilding a church in their backyard, and the couple grew to enjoy that their story was being told, he said.

Sarah Gardner, a junior in photojournalism and photography from Eureka, said returning to Harrisburg after the tornado was surreal.

“Some of us had not been back to the town since then.  It was amazing to see the progress and the positive spirit the community possessed,” she said.

Phillip W. Greer, photojournalist-in-residence, said the residents “fall in love” with students while they are working. The experience fosters a stronger bond between the communities, the university and the students, he said.

Laura Roberts, a senior studying photojournalism, said it wasn’t easy to select the best images for from the thousands of photos. She was assigned to photograph students at the high school and the football team, which Roberts said was interesting because of her own homeschool background.

The generosity of the school’s students and staff and in the community extended everywhere, including the opportunity to stay in the Dorrisville Baptist Church, she said.

“It showed you that there are still good people in the world, which is easy to forget as a photojournalist when so many of the infamous images made by photojournalists are of war or famine or the like. It was really refreshing,” Roberts said.

Roberts said she chose to attend SIU because of the weekend workshop opportunity, describing it as “an incredible experience.” Some residents were surprised the students would find their town interesting but Roberts believes the book “says differently.

“It speaks to the great people we got to work with, as well as the talents of the students photographing them,” she said.

The weekend workshop is one of the most beneficial aspects of the photojournalism department, Gardner said.  “The encouragement, knowledge and inspiration the professionals bring is unmatched by any other experience you can find at the university,” she said.

Mullen said working under the tutelage of photojournalism professionals was initially terrifying. But by the end of the weekend Mullen said he couldn’t wait for his team leaders to see what he shot because of his own improvement during the two days and the hunger for additional feedback.

“It’s exciting to hear from someone who has been in your field more than 15 years say, ‘Oh, that’s a nice shot,’ and give you a fist bump,” Mullen said. 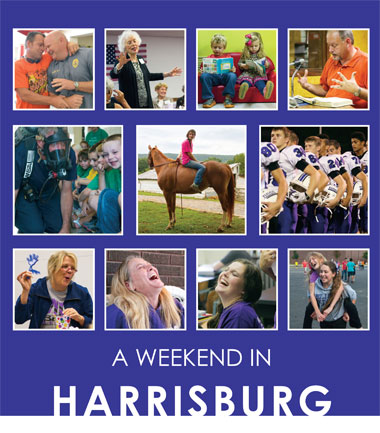