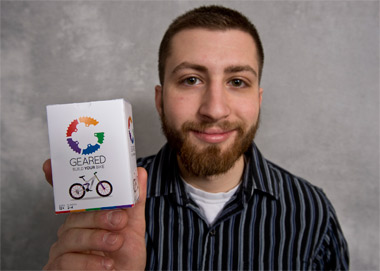 CARBONDALE, Ill. -- You know what they say: find a job you are passionate about and you’ll never work a day in your life.  Maybe that’s not exactly true, but when a passionate interest meets a dream and a paying idea is born, that’s success.

Southern Illinois University Carbondale senior design student Alex Solomon, a Cobden native, knows a little about that.  Solomon took his passion for bicycling, his knowledge of design, and a really good idea to the popular crowdfunding platform, Kickstarter.com.  The results?  He’s in business.

Solomon’s project is a bicycle-building themed card game called “Geared.”   During the strategic game, players race against each other to build as many bicycles as possible by combining a frame card, a handlebars card, and a wheels card.  Other players may opt to sabotage builds by using action cards to remove, steal, or swap parts.  Different levels of bicycle parts are worth differing levels of points -- the higher the level, the more points possible.  The first player to earn 100 points wins the game.

Solomon entered his idea on Kickstarter, seeking $15,000 seed money to produce and market his game.  Those who backed his game received different incentives, depending on how much they pledged.  Solomon’s 1,193 backers pledged $37,354 -- more than twice the amount he’d sought to launch his game.  Now that the pledging period is over and the money is coming in, Solomon said nearly all of the backers made good on their initial promise to help him get his game off the ground.

“I was featured in Kickstarter’s newsletter, ‘Projects We Love,’” he said.  “And then the pledges started rolling in like crazy.”

It all started with the whim of an idea, Solomon said.  That, and a really long bike ride.  Though he says he wasn’t a bicycle enthusiast until college, a friend’s cross-country journey made him curious -- the kind of curious that led, eventually, to his own 4,000-mile long bicycle trek to raise money for Multiple Sclerosis. He also wanted to play a recreational game involving bicycles when he wasn’t actually on a bicycle.  Not finding what he was interested in, Solomon decided to design his own.

“In my Graphic Design 1 class at SIU, we had an assignment to build a board game or a card game, and complete the designs for it,” he said.  “The top designs from the class went into Kickstarter.”

“I really underestimated the support of individual backers,” he said.  “I really felt like I was part of a community -- it was a totally amazing feeling,” he said.

Solomon is the final production stages for his game.  Pre-orders and orders from Kickstarter backers are at more than 1,000 individual orders, with orders from around the world – including Japan, China, the United Kingdom, and Australia.

During the funding process several bicycling magazines and blogs promoted Solomon’s project.  Solomon plans to advertise in those venues for more customers.  He’s also looking at area retailers to carry the game.

“You really need to be willing to go above and beyond,” he said.  Take every opportunity to better yourself in your course work and through internships.  You should be designing constantly, and really immersing yourself in the world of design.  Really look at designs, and figure out why they work or don’t work.  Do as much as you possibly can.”

For more information about the Geared card game or to order a set, see gearedcardgame.com.