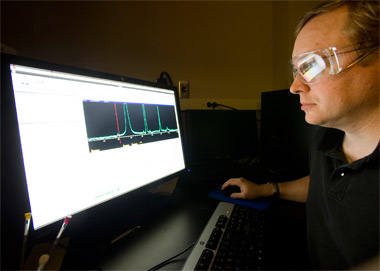 Scientists at SIU are making amazing contributions to health care – advances that will make a positive difference for our families, our friends, and many, many others.

Boyd Goodson, an associate professor of chemistry who joined our faculty in 2002, is part of a team that has developed a new device to improve lung imaging. Here’s how important that is: COPD, also known as emphysema and chronic bronchitis, is the third leading cause of death in the United States.

Boyd and his fellow scientists shared the great news in an article published in “Proceedings of the National Academy of Sciences,” which is one of the most prestigious scientific publications in the world. In addition to Boyd, the team includes scientists from Vanderbilt, Harvard, Drake University, and the United Kingdom’s University of Nottingham.

I met Boyd on my second day at SIU in 2010 as we surveyed the damage to his lab and several others caused by an accidental fire. Major repairs were needed, as was new scientific equipment. But there never was any question about the importance of getting Boyd and his colleagues back in their labs.

That was a challenging time, but Boyd – like the dedicated scientists and researchers throughout our university – remained focused on making a positive difference in the lives of others.

What Boyd and the members of his team have developed is a new approach to creating an MRI contrast agent for lung imaging. The process uses a laser to “hyperpolarize” xenon, a gas that is in the air around us in trace amounts.

“Your lungs are essentially empty spaces,” Boyd said. “An MRI may detect the blood vessels of the lungs, but it doesn’t tell you about lung function, about whether there is a ventilation defect or if gas exchange is working in a particular region. We can use a CT scan to look at lung tissue density for lung cancer, but that doesn’t tell us anything about lung function. With COPD and other lung diseases, it is a question of function.”

Here’s how it works: A patient inhales the hyperpolarized xenon contrast agent from an inflated bag prepared by the polarizer device. The xenon allows the lung spaces to be visualized in detail.

“The xenon signals can even indicate the efficiency of gas exchange for a given region and degree of oxygenation – key indicators of lung function,” Boyd explained.

People suffering from asthma and cystic fibrosis also may benefit from this new device, in addition to those who may need a lung transplant. Boyd said other scientists are trying to determine if it will help with lung cancer detection or the planning of lung cancer treatment, while another possible use eventually may be brain imaging.

The xenon polarizer, as it is known, received Food and Drug Administration approval for clinical tests. Those are now under way at Harvard Medical School’s Brigham and Women’s Hospital. Boyd also noted that this is an “open-source” device, which will make it more widely available compared to previous technology.

Everywhere you look at SIU, top-notch researchers are dedicated to improving the quality of life here at home and throughout the global society.

(In the photo: Boyd looks at the nuclear magnetic resonance spectrum of a sample he was studying in his research lab.)