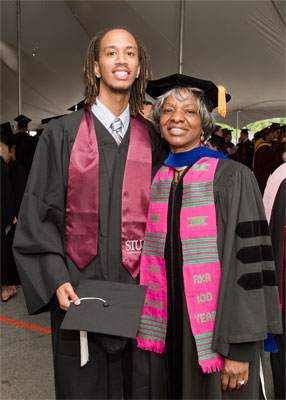 Calvin is pictured with Pamela Smoot, clinical assistant professor of History and Africana Studies, at commencement.

Though the school year is over, the SIU campus continues to be a very busy place.  We are hosting orientation sessions throughout the summer for hundreds of incoming freshmen and their families. These are important first steps for the members of the Class of 2017 as they begin to learn about the many valuable resources available to them.

The most important of those resources are the faculty and staff who are so passionate about student success.  Many of them attended commencement on May 11 because of how proud they are of the Class of 2013, students who they not only taught, but also mentored.

Calvin Zimmerman, who is from Chicago, had plenty of supporters at the SIU Arena as he earned his bachelor’s degree in sociology. He was all smiles as I shook his hand and wished him much success as the next chapter in his life unfolds. In the fall, Calvin starts graduate studies at the University of Pennsylvania as the recipient of a prestigious five-year fellowship.

Calvin’s dedication as an undergraduate – he maintained a perfect 4.0 grade point average in his major – prepared him for the fellowship. He is quick to credit his SIU mentors with helping him develop new perspectives and attitudes.

As a freshman, Calvin was considering a sports marketing major. When he became a McNair Scholar – a program that promotes academic excellence and success in graduate school among members of underserved groups -- and learned he had to complete a research project, he realized he was more interested in community organizing and social change. That led him to sociology and his first exposure to research.

Calvin’s personal growth continued through participation in the Progressive Masculinities Mentors and MEN of Distinction, both part of the Black Resource Center’s Black Male Initiative.

"The Progressive Masculinities Mentors meetings pushed me to look into myself and my attitudes and behaviors, and correct them,” Calvin said.  “The focus of the group is to move college men out of the macho stereotype and show them affirmative possibilities. I evaluated myself and really took my education seriously.”

He also benefitted from the weekly MEN of Distinction meetings, where the discussions often centered on education and current events and issues.

Calvin became interested in conducting research on college men and masculinities. He won a competitive grant through our REACH program, which encourages undergraduates to work on an independent research project with a faculty mentor. He presented his research in March at a Midwest Sociological Association meeting.

Calvin’s many mentors, including sociology Associate Professor Rachel Whaley and Derrick Williams, coordinator of the Black Resource Center, also inspired him to give back. As a senior, Calvin mentored first-generation students who are in our First Scholars program.

"I’m a first-generation student, and I decided I had an obligation to help,” Calvin said. “I felt I should pay it forward. Anything they needed help with, I wanted to help.”

After he completes his doctoral degree at the University of Pennsylvania, Calvin hopes to become a university faculty member. Like those who helped him succeed at SIU, I am confident Calvin will be a great influence on the students fortunate enough to have him as a mentor.