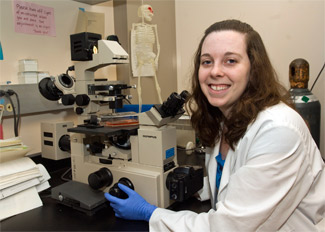 “I can see no better way to influence the lives of others positively than by taking advantage of my interest in science and using it in research and education.”

One of our favorite expressions when describing SIU is “brain, meet heart.” Students come to our University to prepare for success in their careers – and in life. They do so in a nurturing environment that encourages them to follow their hearts as they choose how they can make a positive difference in the lives of others by sharing their talents and their passion.

Kelsey Jarrett has made that kind of difference on our campus, and I am confident she will do so throughout her career. A Coulterville native and Chancellor’s Scholar, Kelsey was one of the first students I met after becoming SIU chancellor in 2010. She excelled as an undergraduate, earning her bachelor’s degree in microbiology with honors in 2011. She soon will earn her master’s degree in cellular and molecular physiology. Later this summer, she will leave SIU to pursue her doctorate in cell and molecular biology at the Baylor College of Medicine in Houston, Texas.

Kelsey’s contributions extend beyond the classroom and lab. She has tutored and mentored fellow students; helped organize Saluki Science Ambassadors, a student leadership group in the College of Science; is a member of Student Researchers in Physiology and Anatomy; served as a student ambassador to Beijing, China; and performed as a member of the Marching Salukis and the pep band – even finding time to play during a few basketball games this year while juggling her graduate student responsibilities.

As accomplished as she is, Kelsey remains incredibly humble. She was the valedictorian of the Class of 2007 at Coulterville High School. But, she quickly adds, “There were only 12 of us in the class.”

These days, much of Kelsey’s time is spent in the lab.

“Science isn’t for the faint of heart,” she says. “Most of the time your experiments won’t work, and you have to have these crazy problem-solving skills. But I wouldn’t trade this for the world.”

She believes it is her calling as a scientist to “tackle the burning question of why people get sick.”

“During high school, I babysat for a little girl who had cystic fibrosis. The poor little girl couldn’t go to school or do fun things because she would get sick so easily. And my dad had kidney cancer while I was in high school, and fortunately he is fine. I have watched people with illnesses and this has fueled my interest.”

Kelsey’s research focuses on a gene that may be related to neural tube defects, depression, cancer, and autoimmune disorders – such as Type 1 diabetes, multiple sclerosis, and leukemia.

As she tries to piece together what she calls “life’s puzzles,” Kelsey gives credit to other students for mentoring her, and to her professors.

“I have had amazing research mentors, I can ask them about anything. I owe most of what I’ve accomplished in science to them, because they put me in the lab.”
Her goal is to teach and conduct research at the university level.

“I can see no better way to influence the lives of others positively than by taking advantage of my interest in science and using it in research and education.”
Brain, meet heart.