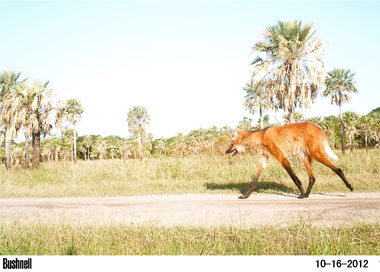 The elusive maned wolf  --  The largest wild canine in South America, the maned wolf is a mysterious animal.  Little is known about the species even where they are native.  Southern Illinois University Carbondale graduate student Nathalia Mujica, a citizen of Paraguay, is researching some basic information about where the wolves live and the habitat they need to thrive.  (Photo provided)

CARBONDALE, Ill. -- The largest canine carnivore in Paraguay is elusive to the point of obscurity. Southern Illinois University Carbondale student Nathalia Mujica wants to change that.

Mujica is a graduate student in the forestry program, where she studies with Clayton Nielsen, assistant professor with the SIU Carbondale Cooperative Wildlife Research Laboratory, Department of Forestry, and Center for Ecology.  She came to SIU Carbondale from her home in Paraguay, and she returns to Paraguay for her fieldwork. Her subject is the maned wolf, an animal that many would not readily identify.

A former high school biology teacher, Mujica’s interest is not only conservation, but also education. Specifically, she wants to see the curriculum in Paraguayan schools include more information about native animals, and she wants to help make that happen. The dual emphasis on research and teaching is part of what brought her to SIU Carbondale.

“We need to change education,” she said.  “We need to emphasize our own area so that children in Paraguay know more about the animals native to their home area.”

The maned wolf looks a bit like a red fox on stilts.  The native name, “Aguara guazu,” in fact, translates as “big fox.” Omnivores, they eat small mammals, insects, reptiles, birds, fruits, and even some roots.  They are the biggest canid species in South America, but at an average weight of approximately 50 pounds and standing about three feet high at the shoulder, they are not as big as the top wild predators, the cougar and the jaguar.

The International Union for Conservation of Nature considers the maned wolf as “near threatened.”  Most countries within the maned wolf’s habitat consider the species to be “endangered,” but the species is unclassified in Paraguay due to a lack of available information.  Maned wolves are not easy keepers in zoos, and they are shy animals and avoid humans.

“Even in rural areas in their range, they are not well known,” Mujica said.  “My friends have no idea what (a maned wolf) is!  In the cities, people have never seen them.”

Because so little is known about the maned wolf, a significant part of her research is understanding the animal -- where they live, and what habitat-type they prefer, Mujica said  She is using three tracts of private property in different climates: a humid area, a drier area, and a transitional area between the two types.  An extensive system of motion cameras helps her capture images of animals in the area to help her gauge maned wolf population.

Ultimately, Mujica hopes to establish the perimeters of the maned wolf’s habitat in Paraguay, and to describe the habitat in which they thrive.  Loss of habitat, she said, is affecting the animals adversely.  The maned wolf is a target for poachers, and disease travels through a population more quickly when the habitat is limited.

“We are losing habitat, and we don’t even have basic information on some of the species in the areas suffering from habitat loss and changes to the environment,” she said, explaining why her study of so elusive and little known creature is significant.  “We need more information so we can put into place better conservation practices.  We need to know more.”

Mujica has completed much of her initial fieldwork, and has begun analysis of the data and images she has collected. Ultimately, she will present and publish an overall picture of the day-to-day existence of the maned wolf – what features inform their lives, and what factors contribute to their presence or absence in various habitats.  She plans some additional publications from her work on several of the other species she is researching.  In addition to the maned wolf, Mujica is also collecting data and researching eight other species native to Paraguay: Pampas fox, crab-eating fox, South American tapir, white-lipped peccary, collared peccary, cougar, Geoffroy’s cat, and the giant anteater.

“Nathalia’s research will be valuable for wildlife conservation in South America and will extend SIU’s reputation internationally,” Nielsen said.  “The University has a strong and growing commitment toward the global community, and such efforts will only enhance our position in developing nations.”

“I really like SIU Carbondale,” Mujica said, noting that she has made many friends from the United States and elsewhere while she has been in the graduate program.

“The University has a good reputation as a research university, but it isn’t in an urban center.  There are so many beautiful places nearby -- and of course that is something a forestry major notices.” 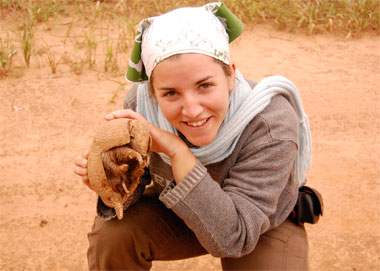 Field Research -- Nathalia Mujica, a graduate student from Paraguay
studying forestry at Southern Illinois University Carbondale, is using an
extensive network of cameras in three different types of natural habitat to
gather basic information about maned wolf populations.  She is also studying
eight other species along with the maned wolf.  Here she introduces an
armadillo to the camera. (Photo provided)