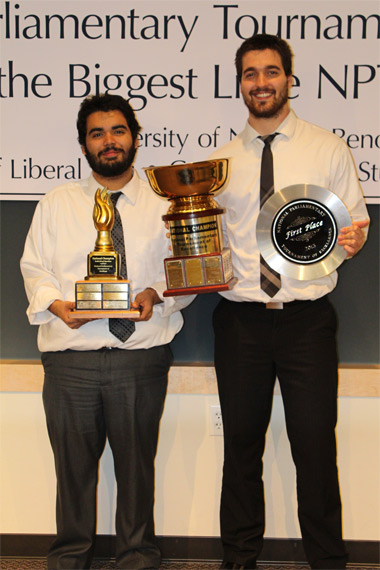 CARBONDALE, Ill. -- Within the space of one week, the Southern Illinois University Carbondale Debate Team earned two national titles, cementing the University’s position as home to one of the nation’s top debate programs.

In the process, SIU Carbondale became one of only six universities ever to win both national titles in a single year -- and this is the seventh year SIU has won a national title.

The duo of Mike Selck, a senior from Blue Springs, Mo., and Josh Rivera, a sophomore from Chicago majoring in political science, won the National Parliamentary Tournament of Excellence (NPTE), hosted at the University of Nevada, on March 20.  The team closed out the season by winning the National Parliamentary Debate Association National Tournament (NPDA-NT), hosted by the University of the Pacific, on Tuesday.

“We are extremely proud of our national champion debate team,” Chancellor Rita Cheng said. “Everywhere they travel to compete, our students demonstrate their commitment to excellence and SIU’s focus on student success. They are wonderful ambassadors for our University.”

The SIU Carbondale Debate Team has placed a team in the “Final Four” at the NPTE, the most prestigious collegiate debate tournament in the United States, for six straight years, including a national championship in 2008, for which the team was honored at the Illinois State Capitol.

At the conclusion of that tournament on March 20, a coaches’ poll named Rivera the top debater overall in the tournament. Selck placed third in the same poll.  Todd Graham, director of the University’s debate program, said Rivera might be the first sophomore ever to claim the coaches’ poll award.

“Winning both national championships was an amazing experience,” he said. “The debate team worked exhaustively to ensure that we did our best at the tournaments.”

SIU Carbondale posted two debate duos in the “Final Four” of the NPDA-NT.  Selck and Rivera won the tournament, and teammates Ben Campbell, a senior from Springfield, Mo., and Sid Rehg, a junior from Swansea majoring in speech communication, finished third in the tournament.  SIU Carbondale is the only University with two teams in the “Final Four,” with 150 teams competing.

The debaters fared well in the coaches’ poll at this tournament as well. Campbell was named third best overall debater, and Rehg was named ninth best.

“We won every national championship our organization awards (there are two), making us unquestionably the best debate team in the country,” Graham said.

Graham also singled out graduating senior Selck for special praise.  He noted that Selck has won 18 collegiate debate tournaments during his undergraduate career, making him the winningest collegiate parliamentary debater in history.  He also racked up two prestigious individual awards this season: the Sharmi Dochi Award presented by the University of California Berkeley, and the All American Debater Award from the association.

Graham explained that intercollegiate debate is based on research and logic.  He has always stressed preparation with his team, and it shows.  To win the NPTE, Selck and Rivera debated on a total of 14 different topics, including the two final rounds of topics: whether the United States should substantially improve its ballistic missile defense capabilities, and whether the Republic of Turkey should enact constitutional measures to protect Turkish Kurds.  Other topics touched on student loans, Social Security, drones, synthetic biology, and renewable energy.  Debaters have just 20 minutes to prepare before each debate, so having some familiarity with the topic offers an advantage.

A total of 864 debate duos competed in intercollegiate parliamentary debate this year.