But their education has led to Diaz and Lindberg being in very select company in the aviation industry.

There are only about 400 employees with the NTSB, which also investigates other significant transportation-related accidents involving trains, vehicles, marine and pipelines.

Diaz and Lindberg are the first two SIU aviation program graduates to become NTSB investigators through internships with the agency.  Their career success speaks highly of the University’s aviation program, said David A. NewMyer, chair of the Department of Aviation Management and Flight.

“The NTSB does not hire a single-dimensional person,” NewMyer said.  “It helps that our students will understand two or three aspects of the aviation industry and have an overall knowledge of safety, management and flight.”

Knowing that the NTSB is a small agency and “hard to get into,” Lindberg said he’s grateful for the opportunity.  He has investigated general aviation crashes, where investigators go the crash sites, recover debris, and lay out the pieces in an effort to determine the cause of the crash.

“I still get to be involved in the aviation industry.  I really like the puzzle and challenge that an accident investigation brings out,” Lindberg said.  “You have to start from scratch and go through your investigative processes.  You really go into every accident not knowing that much about it. You usually don’t have witnesses, and if you do, those witnesses likely are not involved in the aviation industry.  Because it’s so challenging it makes it that much more rewarding.”

Lindberg, a 2007 graduate of Carbondale Community High School, also completed a three-month internship in 2011 in the safety and security department as part of the select “NoLimits” Southwest Airlines Internship Program.  He is the son of Phillip and Lynn Andersen Lindberg.  Phillip Lindberg recently retired as the assistant director of the Center for International Education; Lynn Andersen Lindberg is director of business innovation and research.

Lindberg said he is grateful for the opportunities the program offers.

“That shows how robust and how great the SIU aviation program is,” he said.  “We can put people in the top positions in every industry in aviation and they can excel.”

Of the approximately 1,600 aviation-related accidents each year, the bulk of an investigator’s work involves general aviation aircraft, and ranges from airplanes touching wings to multiple fatality crashes.  Diaz, whose eastern region ranges from Florida to Maine and as far west as Kentucky, will average about 40 cases a year.

Depending upon the incident and scope of an investigation, several agencies can comprise an investigative team, Diaz said.  The key component is taking what is unknown and putting the facts together “to help make a cohesive narrative for something that is seemingly inexplicable.”

Diaz was part of the investigative team in the March 2009 crash of a single-engine turboprop plane that killed 14 people, including seven children.  Reports indicate the family was en route from California to a ski vacation when the plane crashed near Butte, Montana.

There were no crash recorders, or “black boxes” on the plane, which was heavily damaged.  But Diaz was able to find a badly damaged computer chip from a circuit board of the plane’s safety-warning system that helped unlock clues into the cause of the crash, which included the pilot not using an anti-ice additive in the fuel system as required when flying in freezing temperatures.

Diaz said he likes the variety that the job provides.

“It’s never the same thing,” he said.  “You sometimes have recurring themes.  One day you could be investigating a bounce landing that involves a student pilot; the next day it’s a multiple fatality that is very complex and very technical.

“If you are able to make some recommendations to help prevent a future recurrence that is the thing that drives you in your pursuit of safety,” Diaz said.

Diaz credits José Ruiz, an aviation management professor, with his initial interest in airline safety.  Both he and Lindberg were students in Ruiz’s aviation safety class.

“Going through his courses cracked the door open into the world of aviation safety and gave me the realization that this is an aviation career choice you can make that doesn’t involve sitting in the front seat of an airliner,” Diaz said.

Ruiz said many students initially come to the aviation program with aspirations of becoming an airline pilot in part because it’s the most visible position in the aviation industry.  Lindberg and Diaz’s success shows the significance of other aviation-related fields.

“This is an elite group,” Ruiz said.  “This says a lot about the type of education we try and provide our students.  We are equipping our students with the knowledge and skills needed to succeed in the aviation industry.”

The aviation industry is aware of the University’s aviation program success, Diaz said.

“The education I received there was very important in forming that background,” he said.  “It wasn’t an education that was solely devoted to getting you into the left seat or right seat of that airliner.” 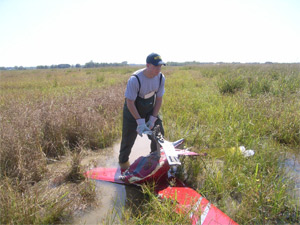 Focusing on air safety -- Two graduates of Southern Illinois
University Carbondale’s aviation management program are
investigators with the National Transportation Safety Board.
Dennis Diaz (at table), a 2003 graduate, is documenting a
recoverable data module unit from an April 2012 crash of a
Cirrus SR-22 in Anderson, S.C. The unit was sent to the
agency’s laboratory in Washington, D.C., for further processing.
Josh Lindberg, who graduated in August and is a 2007 graduate
of Carbondale Community High School, is shown in a crawfish
field examining a tail rotor that separated from a Bell 206
helicopter that hit a guy wire near Crowley, La., in October 2012.
(Photos provided) Download Photo Here 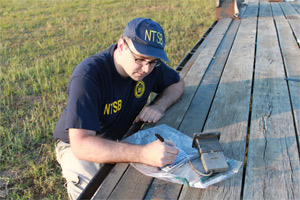