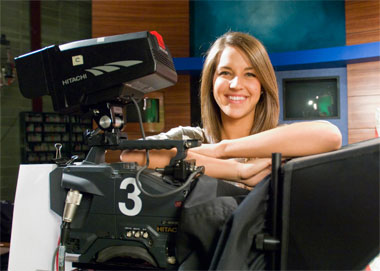 Putting her career in focus – Brenna Coyle’s energy, drive and dedication has helped her in attaining a bachelor’s degree in radio-television with a specialization in media industries in less than four years at Southern Illinois University Carbondale.  Coyle, of Tinley Park, is among nearly 1,500 students who will participate in commencement ceremonies Saturday, Dec. 15, at 2 p.m. in the SIU Arena.  She will carry the banner of the College of Mass Communication and Media Arts during the ceremony.  (Photo by Russell Bailey)

CARBONDALE, Ill. -- With energy, drive and dedication that inspire those around her, Brenna Coyle has packed a lot into her time at Southern Illinois University Carbondale.

Coyle will carry the banner for the College of Mass Communication and Media Arts during Saturday’s commencement ceremony at the SIU Arena, and has seldom slowed since arriving on campus just over three years ago.  Because of summer class work, Coyle, who came to SIU Carbondale in fall 2009, will earn a bachelor’s degree in radio-television with a specialization in media industries in less than four years.

Her work includes two years as supervising producer of the “Studio A: In Concert” television series, completing externships and internships in addition to working outside the classroom, and serving as a volunteer peer adviser and tutor to other MCMA students.  While in school, Coyle earned a Virginia Marmaduke Scholarship, and earlier this year was first in the “Best Sales Presentation” category in the Illinois Broadcasters Association Student Silver Dome Awards.  She also held outside jobs as campus marketing representative for Apple, and waitress and hostess at Buffalo Wild Wings in Carbondale.

“She’s driven,” said H.D. Motyl, an assistant professor in the Department of Radio, Television and Digital Media. “She knows what she wants to do and she goes for it.  She’s resourceful enough to find things she can use to help take her to the next step.  I wish I could bottle some of what she has because I would drink it myself.”

Coyle, 21, is the daughter of Jeff and Kathy Coyle of Tinley Park.  A 2009 graduate of Lincoln-Way East High School in Frankfort, she has two younger sisters and a younger brother.  Coyle came to SIU Carbondale on the recommendation of a high school instructor, Mary Beth Deady, who oversaw the school’s broadcasting program.  Deady earned her degree in radio-television from SIU Carbondale in 1996.

Carrying the college’s banner “is a huge honor,” Coyle said, one of 53 undergraduates and six master’s students from MCMA scheduled to graduate on Saturday.

“This is an awesome opportunity.  I’m so excited to do it,” she said.

Coyle enjoyed her classroom work, and credits instructors for their willingness to provide a critical component of experiential learning.  It is up to each student to get the most they can from opportunities they have -- a common refrain that Coyle said she reminds incoming freshmen.

“You have to want to do it to get somewhere in this industry,” Coyle said.  “The education here is awesome, and the programs we have complement that perfectly.  But it comes down to a want and desire to.”

That drive, she said, goes back to an athletics background and gymnastics career that began when she was three years old.  Her high school coach emphasized not just a focus on gymnastics, but also “the life skills that I gained in the process of learning everything,” she said.

While in high school, Coyle tore her anterior cruciate ligament (ACL) in both knees, which limited her gymnastics abilities -- but not her drive.

“The life lessons that I learned from that and the dedication it takes to learning one routine … you apply that to every aspect of your life,” she said.

Deady, a coordinator in Lincoln-Way East’s instructional technology department, said she urged Coyle to apply and attend SIU Carbondale.  While in high school, Coyle was in two of Deady’s classes -- business marketing, and advertising and broadcast fundamentals -- and led an advertising team that created a campaign for a local bowling business.

Coyle said she’s grateful for her opportunities at SIU Carbondale.  She said she gained a greater appreciation for the program after attending the National Association of Television Program Executives (NAPTE) annual conference in January 2011, where network representatives and others in the media broadcast field knew of SIU Carbondale.

“It was insane the amount of credibility we have in the industry,” she said.

James Wall, a senior lecturer in radio-television, said Coyle is “one of the finest students” he has worked with in his nearly 15 years of teaching in the program.  With an interest in both the business and creative sides of the industry, Coyle “has a superior grasp of the media industry and will undoubtedly succeed in whatever career path she takes,” Wall said.

Coyle completed an externship with Strategic Marketing in North Palm Beach, Fla., and for the past year, has been an intern with The Arthur Agency in Carbondale.  She will begin a job there as an account manager on Jan. 1.

“Brenna is one of the most collaborative students I have ever had the pleasure of knowing,” said Clare Mitchell, MCMA’s assistant dean of student affairs.  “She truly cares about others and is the first to offer assistance and support.  She is talented, skilled, positive and professional.  She has taken advantage of every opportunity to learn and is happy to share her knowledge with others.”

Motyl first met Coyle while she was a senior in high school, and credits her energy and enthusiasm with Studio A’s success.   The program, which airs six times each semester on WSIU-TV, features musical groups from Chicago, Nashville and the local area.  As the supervising producer, Coyle was responsible for ensuring everything was in place and oversaw a crew of about 40 students.  Motyl, the faculty adviser, said Coyle’s leadership helped raise other student’s enthusiasm to make the program “the best they can.”

“She has this boundless energy and a really positive attitude.  I’m not sure I’ve ever seen her down,” Motyl said.  “But it’s not like she’s so focused that she’s not having fun.  She has a great sense of humor.  She is an amazing individual.  I cannot tell you how much I’m going to miss her.”