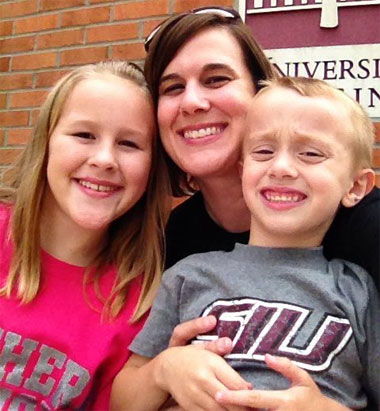 Pursuing her dream – Cathrine White returned to SIU Carbondale this fall to complete her undergraduate career and will graduate Saturday, Dec. 15, with a bachelor’s degree in English literature.  She plans to return to the University in January to begin pursuit of a master’s degree, and plans a teaching career.  White and her children, Kirsten, 9, and Caden, 5, have enjoyed numerous activities on campus with her children.  (Photo provided)

CARBONDALE, Ill. -- Cathrine White pushed the pause button on her education as she fulfilled another dream -- becoming a mother.

But, after a divorce and several years of working in a position where notices of a possible layoff were virtually an annual routine, White decided to visit Southern Illinois University Carbondale to see what it would take to “un-pause” her goal to become a teacher.

White will be among the nearly 1,500 fall semester 2012 graduates to walk across the SIU Arena floor during commencement exercises at 2 p.m. Saturday.  And she is convinced her experience is nothing short of amazing and wonderful.

White, who lives in Carterville, attended SIU Carbondale for a few years beginning in 2000, but left for what she said became a “very extended maternity leave.”  She became mom to Kirsten Jordan, now 9, followed by Caden Jordan, 5.  After her time as a stay-a-home mom, she went to work as a teacher’s aide with the Williamson County Early Childhood Cooperative, where she loved her work with children.  But with state funding always in question, the reduction in force (RIF) notices that told her she may not be rehired for the coming year were becoming way too common.

White’s father, Jim, attended SIU Carbondale in the 1960s and he encouraged her to return to college and complete her degree.  He accompanied her on a campus visit where she met with advisers and found everyone helpful and accommodating.  In no time at all, she enrolled in classes for the fall 2012 semester, addressed financial aid issues, and found a job working on campus in the Office of Teacher Education.

“It was unbelievable how everyone all over campus was so wonderful to me.  The whole process of coming back was so easy.  There couldn’t be a better movie script for it,” White said.

Kirsten and Caden were excited that their mommy was going to school, and quickly told her that they all needed new backpacks and school supplies.

“They think it’s really cool.  They like to tell people, ‘My mom goes to SIU.’  And we’ve had a lot of fun at the University.  I’ve brought them to many of the events on campus like the Chancellor’s Watermelon Fest and breakfast, the homecoming parade and tailgate, and other things,” White said.

The return to school hasn’t come without challenges.  A single mom, White juggles the responsibilities and activities of two children, a job and her schoolwork.  And things have changed at the University since she left.

“There’s a ‘new language.’  I didn’t know what a ‘Dawg Tag’ was or how everything is online.  But everyone has been so great to help me,” she said.

White’s family roots at the University go way back.  Her grandfather, Jack White, was a locksmith with carpentry and key control for 36 years, and actually put the numbers on the Pulliam Hall clock tower.  Jerry White, Jack’s son and Cathrine’s uncle, was a longtime carpenter at SIU before retiring a few years ago.  As unlikely as it sounds, Jerry was helping refurbish the clock a few years ago and discovered his father’s signature on the back of one of the numbers.  He added his signature as well.  Cathrine’s brother, Brett, is an alumnus too, graduating in 1995 with a bachelor’s degree in English education.

As she studied and worked hard, a most interesting development occurred in White’s journey this semester.  Taking English classes this fall for perquisites for her teaching degree, White anticipated graduating in May 2014.  While talking with a faculty member about scholarship opportunities, he suggested that White consider completing a degree in English literature.  Meanwhile, White had made such a favorable impression on faculty and fellow students that many encouraged her to go on to graduate school.  With that advice in mind, White visited the campus advisement office on Dec. 6, to learn more about both options.

“They told me that I had actually completed all of the requirements to earn a Bachelor of Arts degree in English literature from the College of Liberal Arts.  I’m graduating!  I’m so excited.  You could have knocked me over with a feather,” White said.

And that’s not all.  White plans to return to the University in January to pursue her graduate degree.  She will seek a master’s in teaching or English, and plans to pursue a teaching career.

Around campus, those who know White are confident that she will achieve her goals.

“From the first day I met Cathrine, I knew that she had a bright future ahead of her.  Like many of our returning adult students, she had a clear idea of what she wanted to accomplish and was determined to let nothing stand in her way,” said Deborah Barnett, coordinator of Non-Traditional Student Services.  “Her dedication as a student mirrors the devotion she has to her two young children.  She has even included them in visiting campus, going to the library and becoming involved in campus events, including athletic competitions, Student Center movie nights, and other campus programs.  She is a great example, not only for her children but for all of us.”