Paced by Courtney L. Copping, believed to be the first woman to earn top scoring contestant and top pilot honors in Region VIII history, the Flying Salukis put five team members in the top six slots in easily earning a fifth regional title in six years. The finish marks the 43rd time in 44 years that the seven-time national champion Flying Salukis will qualify for national competition.

After winning a national title in 2011, the Flying Salukis continued strong with a third-place finish in May.

The top three teams in the region earn automatic berths to NIFA's national competition, May 6-11, at The Ohio State University.

"Winning another regional title is something that makes me very proud," said Nathan J. Lincoln, a senior lecturer in the Department of Aviation Management and Flight. "Winning five of six regionals reflects the strength of our program and the quality of our students."

The team's depth shone through with Flying Salukis taking the top three spots in each of three events -- SCAN, power-off landing, and aircraft recognition.

Only Mech and Galante will not be available for the national competition in May, Lincoln said.

"This competition was one of the strongest regional showings that we have ever had as a team; not only by winning all but two events, but often placing all or most of the competitors in each event," Lincoln said. "I couldn't be more proud of our team members and how well they performed."

"She has over the last four years just become an amazing pilot and awesome team member. I knew that she had the talent and motivation to perform as well as anyone at this year's competition. It was one of my proudest moments being able to watch her win both the Top Scoring Female and the overall Top Pilot Award," he said.

A senior in aviation management from St. Charles, Copping was the top scoring female competitor in the nation in May. The experience gave her confidence to go in "calm and collected" because of the hard work that she and the team put in, Copping said.

"I was astonished to learn that I had won Top Pilot," she said. "I never expected to win this prestigious award. I could have never won this without the support from my coaches and teammates, and I'm honored to win the title for SIU. I feel this award has validated all my hard work since coming to this school."

Copping, the daughter of Donna and Clarence Copping, said that hard work and determination offset the Flying Salukis' youth and inexperience. She also was third in both power-off landing and short field approach and landing; placed in both fifth and seventh place in message drop alternating with Breum as pilot and drop master, and second in SCAN.

"I was blown away by the performance of our team," she said. "We worked together and studied hard to win the competition. I was really impressed by some of our new members ... it just goes to show that hard work does pay off."

Copping's father, Clarence, is a senior captain with United Airlines, and recently honored as an SIU Carbondale Distinguished Alumni. Copping said she also hopes to work for the airlines.

David A. NewMyer, chair of the Department of Aviation Management and Flight, said the showing "was a true, all-around team event," with a freshman, sophomore, and seniors winning events. The showing continues a strong tradition and the team results "a strong statement by winning in such a strong, all-around fashion."

"As a department chair, one of the most fun things I do each fall is go to the NIFA regional banquet to witness the results of their hard work. It is very satisfying to see their progress as a team."

Copping's performance "parallels what is happening in aviation in general in that the industry is becoming much more diverse and is a place where anyone can work if they put their minds to it and work hard," NewMyer said.

Breum, a senior in aviation management, also was second in both power-off landing and aircraft recognition, and ninth in short field approach and landing. He is the son of Janet and Terry Breum of Lake Villa.

Galante, a senior in aviation management, was sixth in SCAN, sixth in navigation as an observer with Mech as pilot; ninth in aircraft recognition, and ninth in message drop as the pilot with Michael T. Maughan as drop master. Galante is the son of Diane and Steve Galante of Roselle.

Maughan, a senior in aviation flight, is the son of Laurie and Tom Maughan of Pinckneyville.

Mech was also second in short field approach and landing and seventh in power-off landing. Mech, a senior in aviation management, is the son of Darlene and Timothy Mech of Sheboygan, Wis.

Other Flying Salukis to earn points in the event were:

Stehanie J. Armstrong, sixth in computer accuracy. A senior in aviation management, she is the daughter of Christine and Jeffery Armstrong of Marseilles.

John M. Behnke, first in computer accuracy. A sophomore in aviation management and flight, he is the son of Pamela and Michael Behnke of Arlington Heights.

Skyler J. Droll, tenth in computer accuracy. He is a senior in aviation flight from Carbondale.

Kevin D. Grandberry, first in aircraft recognition. He is a freshman in aviation flight from Chicago.

Prescott R. Dean, fifth in short field approach and landing. A freshman in aviation management, he is the Dana and Jerry Dean of Olathe, Kan.

Jacob R. Schwarz, fifth in computer accuracy. A sophomore in aviation flight from Chesterfield, Mo., he is the son of Lisa Luna and Mark Schwarz

The three programs that comprise the University's aviation program -- aviation flight, aviation management, and aviation technologies -- are in the College of Applied Science and Arts.

The other Flying Salukis assistant coaches are 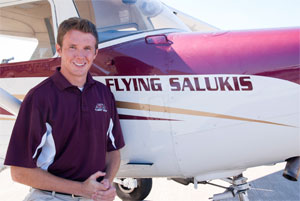 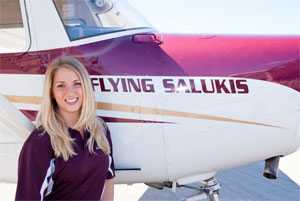