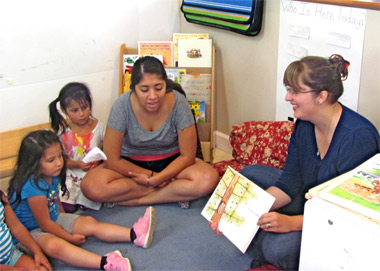 CARBONDALE, Ill. -- When it comes to “how I spent my summer” experiences, a group of students from Southern Illinois University Carbondale can say they made a difference in the lives of some area preschoolers.

Eight graduate students in the Communication Disorders and Sciences program participated in a summer practicum at Su Casa Migrant Head Start in Cobden helping a group of bilingual children between three and five years old prepare for kindergarten.  This is the third year that students, under the direction of Valerie Boyer, assistant professor in the program, assisted Su Casa.  The experience is beneficial to both the children and graduate students, Boyer said.

“The focus of our program is providing prevention-based services and assessment/intervention when needed.  We are helping prepare children for kindergarten by increasing their ability to name letters, connect letters with sounds, and understand critical phonological awareness skills such as rhyming,” Boyer said.  “For our students, it offers the opportunity to work with a growing population in a classroom setting.  It is real-world experience and one that they report is very beneficial.”

The project linking SIU Carbondale students with the youngsters began in the summer of 2010.  It began as a research project on an alternative assessment tool to identify language deficiencies in children who are learning the English language, Boyer said.  The University students observed the children in their classrooms, spoke with the teachers, and worked one-on-one with the children during a four-week period.  The project proved to be so successful and such a good learning experience for all involved that it expanded to include a significant service component in 2011, Boyer said.

Last year, 10 graduate students worked with preschoolers in a six-week service/research project and implemented an evidence-based emergent literacy program for four-year-olds.  They utilized tools that included “Read It Again,”  a 30-week shared storybook reading and related activity program, which has documented evidence that it improves language skills in Head Start children.  The goal is to build a child’s English vocabulary, narrative skills, print awareness and awareness of phonics.

The University also expanded the program and began working with Southern 7 Head Start, Migrant Education Inc., and Su Casa to help children from Cobden and Anna.  Graduate and undergraduate students in the Communication Disorders and Sciences program worked with children in Anna are starting a second year with the bilingual children.

“We will evaluate the program fully after two years, but data from the first year is promising significant growth in vocabulary development,” Boyer said.

This summer, Su Casa provided support for Laura Garcia, a graduate student from Cobden, as she organized and implemented prevention, assessment and intervention activities.  The University students use a variety of methods to help the children with their English vocabulary development, particularly using activities that bridge their new English language to the Spanish vocabulary they are more familiar with.

Garcia’s involvement dates back to the project’s inception and she said she has learned much and really enjoyed the work.  She said she has a tremendous love for the Spanish population and looks for opportunities to get involved in work like this.  She has learned how to relate English information to Spanish-speaking children, prepare them for school, and in the process discovered much about the way bilingual children learn and process information.

“These children are like sponges; they absorb everything.  Even though sometimes it may seem like they don’t understand, they are gaining exposure to the English language,” Garcia said.