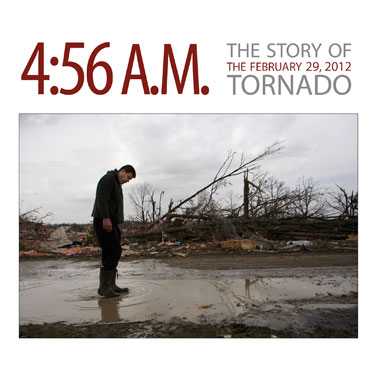 CARBONDALE, Ill. -- A book that chronicles the tragedy and resiliency of a region torn apart by a tornado that also showcases the skills of Southern Illinois University Carbondale photojournalism and journalism students will be available later this month.

"4:56 a.m. The Story Of The Feb. 29, 2012 Tornado," is a product of students and faculty from the SIU Carbondale School of Journalism. The 80-page book has 67 full-color photographs and shows the aftermath of Feb. 29 tornadoes that tore through Harrisburg and Ridgway. The storm killed eight people and injured more than 100. Six people died when the tornado struck; two others later died as a result of injuries sustained in the tornado.

School of Journalism faculty and students will present the book to the community at a reception from 2 to 4 p.m., Aug. 19, at the Harrisburg District Library, 2 W. Walnut St. The Friends of the Harrisburg Library are sponsoring the reception, which is open to the public.

The books cost $10 apiece. Proceeds from the sale of the books after printing costs will go to various local agencies that are assisting with the recovery, said William Recktenwald, a senior lecturer and journalist-in-residence in the School of Journalism. He hopes the project will raise between $10,000 and $15,000 for relief efforts.

"This book is full of compelling images that remind us of the magnitude of this disaster, but also of the incredible courage of our friends and neighbors in Harrisburg and Ridgway," Chancellor Rita Cheng said. "Our students benefited in so many ways from this project, gaining valuable insights that will serve them well in their careers. Many members of the University community have contributed time, effort and resources in these hard-hit communities, and we are pleased to donate the proceeds from the sale of the book to the ongoing recovery efforts."

Shot by 16 photojournalism students, the images detail the storm's devastating impact and rebuilding efforts. Recktenwald hopes the book becomes a family heirloom and keepsake of future generations. Advertising and journalism students also worked on the book, including its design.

"This was one of the most monumental events ever to happen," he said.  "It's a terrible tragedy but it also shows the strength of the human spirit and how people pull together and work together."

The book sponsors are SIU Carbondale, along with Banterra Bank, Harrisburg Medical Center, Primary Care Group, and Williams & Associates, all in Harrisburg.

The book is the sixth produced by the School of Journalism in the last five years, said William Freivogel, journalism school director. Other books include "The Cairo Project," "The Shawnee Project," and three separate photojournalism workshops that resulted in books chronicling Murphysboro; Alto Pass and Cobden; and Carterville, Cambria and Crainville.

This type of project "is the most important and interesting work we do -- both as professors and students," Freivogel said.

"It serves the community, teaches students the importance of public service journalism, and connects the University to the community," he said.  "Students, who produce all of the books, are held to professional standards and mentored closely by professional journalists. There is no better learning experience."

The tornado hit Harrisburg shortly before 5 a.m. Feb. 29. Recktenwald was driving into work from his home near Garden of the Gods in rural Karbers Ridge when he arrived in Harrisburg around 6:30 a.m.

"You could see this was a major catastrophe," he said.

Recktenwald said he was in a classroom lab later than morning when his cellphone rang; it was the Chicago Tribune wanting to know whether he had any students available to go to Harrisburg and Ridgway. Recktenwald said he was pleased to tell editors there that three students were in the town by 9 a.m., and gave the newspaper their cell numbers. The next morning, a photo by photojournalism student Steve Matzker and a story written by three students was on the paper's front page, and included in the paper's blog.

"We are a journalism school and this is a teachable moment for our students to be able to go to a national disaster and take pictures," Freivogel said.  "It's trying to tell a story, and the way a story gets told to people around the country and world is through good journalism. I was very pleased our students realized that early and were on their way."

Matzker, a senior in photojournalism, was one of the first photographers from the Daily Egyptian student newspaper to arrive, and said he had unobstructed access to the disaster -- from residents rummaging through rubble to rescuers doing house-by-house searches and utility company employees working on downed power lines.

Matzker said he was not thinking about the enormity of the tragedy while driving to Harrisburg, which he concedes was "probably a good thing." Doing so might have created a bit of hesitation in how he approached talking to victims and shooting photos, he said.

"I took away from the tornado a belief that as a photographer, especially in situations like these, I can't detach myself emotionally and treat people objectively," Matzker said.  "I remember hugging lots of people and getting misty-eyed when they told their stories. I learned that to get close, which is to say access, you have to make personal connections with people to tell their story."

Recktenwald said he, assistant professor Mark Dolan and senior lecturer Phil Greer took notice of the excellent photographs students were gathering while covering the story for the student newspaper.

In addition to coverage from the Daily Egyptian, which is distributed for free, local and regional newspapers detailing the tragedy were also quickly selling out on newsstands, and Recktenwald then began to discuss the possibility of a commemorative book. Freivogel notes the work of Eric Fidler, Daily Egyptian managing editor and adviser, in overseeing the work of his staff in the tornado’s aftermath.

Recktenwald estimates the book's images are from among about 4,000-storm-related photos students shot.

Matzker, who is from Barnhart, Mo., is the book photo editor. He said he wanted to pick images that "best portrayed the extent of the destruction but with that human element involved."

"I tried to focus on images that showed emotion, showed people helping each other, and the humor that still exists after such an event," Matzker said.

"Dealing with real-life tragedy is not something you can get out of a textbook," he said.  "You go out and talk to people whose homes are destroyed, whose families are affected, and whose lives are disrupted."