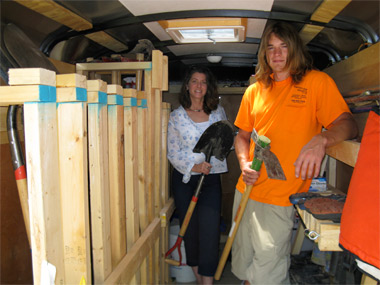 Room to work -- Mark Hermann, a recent graduate in forestry from Tinley Park, and Stephanie Eicholz, executive director of a local environmental group, display a tool-storage system built into the back of trailer owned by Green Earth, which acquires and preserves local natural areas around Carbondale for the public. (Photo by Tim Crosby) Download Photo Here

CARBONDALE, ILL. -- Student volunteerism at Southern Illinois University Carbondale comes in many forms. Some efforts involve dozens -- even hundreds -- of students, united for a cause.

Other efforts involve just one individual. The work can be time-consuming and often takes place outside the spotlight. But the reward comes from making a positive contribution to the community.

A forestry student at SIU Carbondale recently worked behind the scenes using his carpentry skills to help a local environmental group fulfill its mission.

Mark Hermann, a recent graduate from Tinley Park, spent last semester building tool racks and other storage items for a trailer owned by Green Earth, a local group that acquires and preserves local natural areas around Carbondale for the public. Hermann also built the group a tool bench, a holder for spaying equipment, boot racks and other storage facilities for chemicals using skills he acquired working a summer job.

Hermann, the son of Gary and Sue Hermann of Tinley Park, said he became involved with Green Earth through a faculty member in the Department of Forestry, which is part of the College of Agricultural Sciences at SIU Carbondale.  Assistant Professor Erin Seekamp told him about the opportunity to work with the group, which was in need of someone with carpentry skills.

"Since I have some background in carpentry I told Dr. Seekamp that I would be interested in helping out where I could," Hermann said.

A member of Green Earth's volunteer board of directors, Seekamp said the group purchased a trailer to store and easily transport its equipment and supplies that is uses to maintain the natural areas it owns and makes available to the public. Volunteers use the tools and supplies to construct and maintain trails and battle invasive species.

But the trailer itself needed some work in order to be truly useful, she said.

"We really needed a gear rack to make efficient and organized use of the trailer," Seekamp said. "Last fall, Mark approached me during one of my courses indicating a desire to help Green Earth and indicated that he had what he called 'basic' carpentry skills. I knew immediately that Green Earth could use his skills, as we had several carpentry needs."

Stephanie Eicholz, executive director of Green Earth, said Green Earth purchased the 8-foot-by10-foot cargo trailer last summer with grant money from Illinois Department of Natural Resource's Wildlife Preservation Fund for the sole purpose of having a place to store its equipment in one place and allowing it to easily transport it to the sites it owns for volunteer workdays.

"The trailer was a great step forward, but it wasn't equipped with any type of racks for holding and organizing the various hand tools and equipment," Eicholz explained.

"Up to this point our tools and equipment were spread between different locations and were not easily gathered nor transported. But Mark's carpentry skills and the many hours he spent volunteering are services we simply could not have afforded otherwise," she said. "His accomplishment has greatly simplified the logistics of supplying equipment for our volunteer workdays."

Hermann said he earned his carpentry chops working for a company called Construction Concepts of Illinois Tinley Park for the past three summers.

"My good friend Nick Kowalczyk owns the company and offered me a job when I'm home in the summers," he said. "He is a great boss and took the time to teach me a lot of the fundamentals of carpentry, which is where I got the skills to do small carpentry jobs on my own time."

Building the projects was a rewarding experience, he said, and the projects took about 40 hours to complete, including planning and drawing specs for the trailer, and then buying all the materials.

"The actual construction was the largest amount of time," he said. "Working by myself made things move somewhat slower but It gave me the chance to make sure everything was done the way I wanted it."

Seekamp said Hermann's work made a huge impact and demonstrates another example of SIU Carbondale students having a positive impact on a local organization.

"Green Earth never imagined the true level of skill, talent and commitment that Mark offered and the organization is sincerely grateful for his volunteerism," Seekamp said.