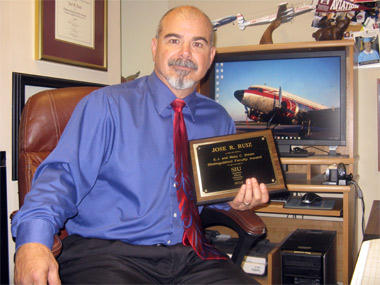 Ruiz, a professor in the nationally recognized aviation management and flight program, doesn’t shy away from expectations -- for either his students or himself.

“It’s our responsibility to raise the level of expectations for our students so they can rise to meet them.  Our kids need to be challenged,” he said.

“They are capable of so much more.  Oftentimes, they just don’t recognize their potential,” Ruiz said.

Ruiz is the 2012 recipient of the E.J. and Mary C. Simon Distinguished Faculty Award in the College of Applied Sciences and Arts (CASA).  E.J. Simon was dean of the college from its inception in 1951 until his retirement in 1970, and both he and his wife, Mary C. Simon, remained strong supporters of the University and CASA.

“It’s very gratifying to receive recognition from your colleagues,” Ruiz said.  “This college is filled with faculty members who are deserving of this award.  I just happened to be the person who was fortunate enough to be selected on this occasion.”

Terry A. Owens, interim dean, said Ruiz “embodies the Simons’ vision and commitment to the college, the University, and Southern Illinois region.”  A two-time recipient of CASA’s “Teacher of the Year Award,” Ruiz is involved in aviation grant and research activities, is a recognized leader in aviation education, and serves the University, the aviation discipline, and community, Owens said.

Ruiz’s work included overseeing and managing a research team in developing and implementing two safety management system projects at Southern Illinois Airport, and putting together a plan for the North Las Vegas, Nev., Airport.  He earned the John K. Lauber Aviation Safety Award from the University Aviation Association in 2009, and will become the organization’s president in September.

David A. NewMyer, chair of the Department of Aviation Management and Flight, wrote in a nomination letter that Ruiz consistently earns high marks from students on course structure.  Ruiz is a long-time volunteer with aviation’s “Living-Learning Community,” in the Mae Smith Residence Hall, and received department “Teacher of the Year” honors four times.

“He is a fine example of what the Simons envisioned,” NewMyer said.  “He has always been a very dynamic person in the classroom.”

Former students point to Ruiz’s passion for teaching and engaging students in class discussions.  Heather Heidinger writes that Ruiz “does not simply create a class, he creates an experience.”

“His stance on tardiness and correct format are second to none,” she wrote.  “While this may have a negative connotation, he would remind us that outside of the classroom we would be held to strict standards.  He would prefer that mistakes would be made in his class rather than in our jobs, which could have a major effect on us.”

Several former students add that points Ruiz made in a class more than a decade ago remain relevant today.  Laura Parnell, a system manager for flight operations with Delta Airlines and a former student, works closely with Ruiz coordinating the internship agreement between the airline and University.

“Every year, I have more and more respect for the passion and care that he has for students and their education,” she wrote.  “You will not find anyone that puts as much enthusiasm and dedication into reaching the students to ensure that they are prepared for their upcoming careers.  When the path of teaching becomes demanding, Dr. Ruiz has no fear in adapting and taking the road less traveled.”

Ruiz earned his doctorate in 2003 in education with a concentration in workforce education and development from SIU Carbondale.  While in the U.S. Air Force, he earned a master’s degree in aeronautical science from Embry-Riddle Aeronautical University-Daytona Beach, and a bachelor’s degree in human resource management from Park University. Ruiz has associate degrees from Park University and the Community College of the Air Force.

Ruiz said it’s important that off-campus students “do not feel removed” from the university community. Having a full-time faculty member from campus teach classes helps to bridge the gap, he said.

With all of his activities, Ruiz credits his wife, Lorelei, an associate professor in aviation management and flight, his son, Joshua, who live in rural Murphysboro, along with a daughter, Allison, who lives in Texas, in keeping him grounded.

“I’m blessed with a wonderful family,” he said.  “When you have that kind of support mechanism coming to work is not a struggle.  I enjoy coming to work; I enjoy going home.  I’m really fortunate to have a balanced professional and personal life.”