CARBONDALE, Ill. -- With a demeanor that belies their strength, the Southern Illinois University Carbondale Flying Salukis are once again among the nation’s elite.

Twenty-eight teams competed May 14-19 at Kansas State University’s Salina Regional Airport. The Flying Salukis used balance to place in 10 of 11 events in the 28-team field, and was second overall in flight events and fifth in ground events.  More than 80 teams compete in regionals to be one of the 28 teams at the nationals.  Among other universities competing were the Air Force Academy, Purdue, Embry Riddle-Daytona, and Auburn.

“This is very demanding competition, and the time and effort our students and coaches spend in practice and preparation is a real testament to their commitment,” Chancellor Rita Cheng said.  “Not only does the team perform at a consistent, high level year after year, its members are wonderful ambassadors for our University.  We are very proud of their accomplishments.”

The Flying Salukis have a solid legacy, and this year’s finish marks a milestone. This is the first time since 1985 that the squad has had consecutive top three national finishes.  The team has seven national titles and qualified for the national competition in 42 of the last 43 years. Recent national finishes include fourth place in 2005 and 2010, and fifth place in 2006 and 2008.

Nathan J. Lincoln, the Flying Salukis’ coach, and two-year team member in the late 1990s, said it is also important how team members carry themselves.

He acknowledges that some teams might have overlooked the Flying Salukis when they were placing fourth and fifth “and now people definitely know who we are.”  But an assistant coach overheard another team compliment the Flying Salukis during the week for their demeanor coming off the national title, Lincoln said.

“You couldn’t tell.  We are still just your ‘average Joes.’  We weren’t arrogant or anything like that,” Lincoln said.  “When they look at some of the other schools that have won national championships they can get that reputation.  I was very happy that our team is very well-grounded.”

Lincoln was also pleased with the balanced scoring in events.  Scoring in 10 of 11 events is a key to having a successful team, he said.  The team showed depth, with five Flying Salukis among the top 23 individual scorers among more than 300 competitors.

“Winning was nice, but being able to prepare these guys to compete in any of the events they were in is what makes this worthwhile,” Lincoln said.

Harrington, who graduated with a degree in aviation management on May 12, praised the team’s accomplishments the past two years.

“This team has worked for two decades … to be in the top three and be at that level. It feels good to be in the aviation community considered as one of those big aviation schools …,” he said.  “After these two years at nationals we are in that conversation.  There is no question about it.”

The top 20 scorers in each of the 11 events earned points toward the team score.

Harrington was pleased to retain the individual SCAN title.  It’s a challenging event that is never the same twice, Harrington said.

“To be able to do it two years in a row says a lot about the caliber of our team and our program,” Harrington said.

Harrington was third in overall scoring.  He was also fourth in computer accuracy, fifth in IFR simulator, eighth in aircraft preflight inspection, and with teammate Ryan C. Veldman as observer, was 10th in navigation.

“Being on the flight team has defined my college career,” said Harrington, a team member in each of his four years in school.  “It’s given me so much in terms of experience, flight time, relationships, and has really set me up in the position where I am now as a recent graduate. I wouldn’t be where I am now without the flight team.”

Harrington, the son of Nancy Curry of Monee, is working part-time as a first officer with Cape Air

Breum was also pleased with his win, but a second-place finish in navigation as observer with Copping as pilot was as exciting, he said.  Breum was also fourth in power-off landing, and sixth in message drop as pilot and Copping as the drop master.  He is the son of Janet and Terry Breum of Lake Villa.

The team practices regularly “and we push ourselves,” said Breum, who was 12th in scoring overall with 54 points.

Copping, the daughter of Donna and Clarence Copping of Saint Charles, is a junior in aviation management. Copping, who was 14th in scoring overall with 53 points, said she thought she might have “an outside chance” to be the top-scoring female pilot this year.  She credits teammates and the coaching staff for pushing her in practice.

“This is like a dream come true,” she said.  “This is amazing. I have worked hard this past year to get to that level.”

“I was glad I was able to accomplish this for my team,” Copping said.

A former Flying Saluki co-captain, Michael A. LeFevre, returned from a year off and was eligible to compete in the national event for a fourth and final time.  A senior in aviation management, LeFevre was seventh in navigation with Justin E. Lopez as observer; 10th in computer accuracy, and 13th in short field approach and landing. He was 11th among the top scorers with 55 points.  He is the son of Stacy and Mark LeFevre of Ashton.

Scott A. Blair, a senior in aviation management, was 23rd nationally in scoring with 41 points. He was sixth in power-off landing, and 10th in aircraft preflight inspection.  He is the son of Lana and Bryan Blair of Bloomington.

Justin E. Lopez, a senior in aviation management and flight, scored in four events:  teaming with LeFevre for seventh in navigation, and finishing 15th in simulator, 18th in SCAN, and 20th in computer accuracy.  He is the son of Sandy and Eddie Lopez of Bourbonnais.

Ryan C. Veldman, a senior in aviation management, teamed with Joshua T. Mech as the co-pilot to place ninth in crew resource management, and teamed with Harrington to place 10th in navigation.  He is the son of Dina Veldman of Lexington, Ky.

Mech is a senior in aviation management. He is the son of Darlene and Timothy Mech of Sheboygan, Wis.

Jonathan K. Galante, a senior in aviation management, was 18th in power-off landing.  He is the son of Diane and Steve Galante of Roselle.

Breum and Lopez will be captains this upcoming season, which begins with Region VIII championships in the fall.  The team loses five members from this year’s team -- Blair, Harrington, LeFevre, Veldman and Samuel W. Oas, a senior in aviation management.  He is the son of Lynda and William Oas of Villa Park.

David A. NewMyer, chair of the Department of Aviation Management and Flight, said this year’s squad stepped up to perform well after losing a few of last year’s squad, along with some assistant coaches.

“The remaining coaches really held it together and put a lot of effort out there,” he said.  “These are faculty members who give up their time to make that extra effort.  I’m as proud of the coaches as I am the competitors.”

NewMyer went out to the awards banquet Saturday night and said the team was not down.

“They are very happy with their accomplishment.  It was a really solid team effort,” he said.

NewMyer and Lincoln mentioned that the Flying Salukis’ three entries in navigation each placed in the top 10 in the nation.

The three programs that comprise the University’s aviation program -- aviation flight, aviation management, and aviation technologies -- are in the College of Applied Sciences and Arts. 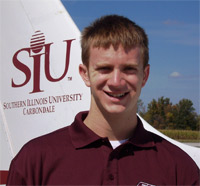 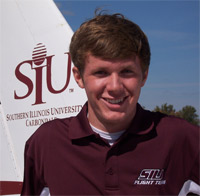 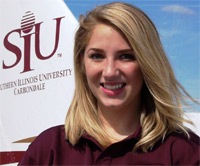