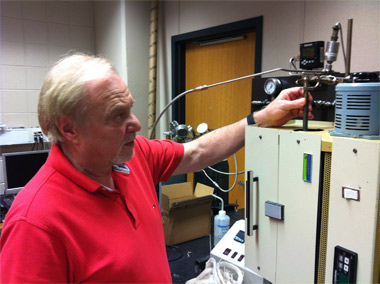 CARBONDALE, Ill. -- A long-time researcher at Southern Illinois University Carbondale will lead its flagship coal research center on an ongoing basis, after serving as its interim leader since last summer.

“Dr. Wiltowski is an award-winning scholar and teacher who has earned a reputation nationally and internationally for his expertise and leadership,” Chancellor Rita Cheng said.  “He has been an important member of the coal research center for many years, and I look forward to his continuing contributions to the center and to the University.”

Wiltowski said he was extremely happy and proud of the appointment, and that he wants to identify opportunities that will most benefit the center and SIU Carbondale.

“I want to see what the center can bring to the conversation on campus in new ways,” Wiltowski said.  “When I'm speaking about risk taking, I'm thinking about the risks you take when you allow yourself to think differently, when you allow yourself to look at something and see a new thing you wouldn't have seen otherwise. I think this is what colleges actually give us all.”

“My hope is that we can contribute to that, and that’s a really big endeavor,” he said.  “That's an endeavor that stays with all of us through our whole life because people become very patterned and very comfortable. It's often extremely uncomfortable to think outside of convention. My hope is that the Coal Research Center will be a center of integration across all disciplines and departments that will be able to complement, enhance, enrich and inspire.”

Wiltowski earned his Master of Science degree in chemical engineering from Technical University, Cracow, Poland, in 1974 and earned his doctorate in catalysis from the Institute of Catalysis and Surface Chemistry, Polish Academy of Sciences in 1984.  He arrived at SIU Carbondale in 1985 and has worked with the staff of the Coal Research Center since 1990.

His research interests include coal and biomass gasification, hydrogen production,  Fisher-Tropsch synthesis of liquid fuels, and heterogeneous catalysis, and he has brought in at least 39 grants from state and federal agencies and private industry, totaling more than $8.5 million, to pursue such research over the years. Wiltowski also has three patents to his name and is the recipient of multiple awards.

Wiltowski said ensuring a sustainable and reliable energy supply is an extremely complicated problem at all levels of the energy supply chain, and he wants the center to contribute to that goal. He said his vision for the future of the center comes from his commitment to excellence in research and teaching, and his roles with Coal Research Center and Coal Development Park, where he serves as associate director.

“The ultimate goal of that vision is to enhance the international and national reputation of the center and raise its standing to the top centers in energy,” Wiltowski said.  “Research and creative activity are essential components of the mission of a major research university such as Southern Illinois University Carbondale. University research centers contribute to that mission in a measure that exceeds what individual faculty members can achieve in the absence of the Center. The synergy in a multidisciplinary research centers offers a unique resource that the University can exploit to support scholarly productivity and to increase external funding.”

Wiltowski said the center should serve as a center of excellence for coal, energy and environmental research, with its mission to advance coal and energy research enterprises and help the University become a preeminent research university.  It should promote research, community education, faculty development and support, scholarship, and service, he said.

“The center will accelerate the pace of quality research by fostering collaboration between investigators, promoting innovation, and assuring adherence to ethical and regulatory standards,” he said.  “So the primary goals will be its continued success as a nationally and internationally valued coal and energy research resource and high faculty achievement and satisfaction.”

Scholarly productivity, research grants and attracting exceptional faculty and graduate students are all ways the center can help the University get a return on its investment in it, Wiltowski said.