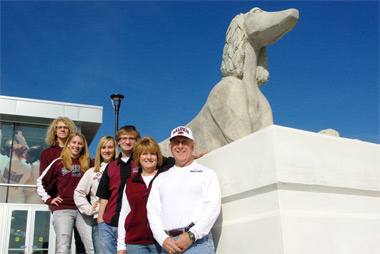 Saluki family -- Everyone in the Beers family of Chester is either a graduate of or current student at SIU Carbondale.  Pictured, from left, are Jeffery, Emily, Kristi, Jimmy, Vicky and Jim Beers.  (Photo provided) Download Photo Here

That’s the number of Southern Illinois University Carbondale degrees the Jim and Vicky Beers family will have when daughter Kristi receives her bachelor’s degree in early childhood education during the Saturday, May 12, evening commencement ceremony.  And, the count will climb considerably higher in the next few years since three of Kristi’s siblings are also SIU Carbondale students.

Bleeding Saluki maroon is a long and beloved tradition for the Chester family.  Vicky and Jim actually met as members of the Saluki marching band more than 30 years ago.  After completing his bachelor’s degree in administration of justice and finding full-time employment at Chester Mental Health Center, Jim returned to campus to pursue his master’s degree in rehabilitation administration and began playing drums with the band again.

Vicky was a senior at the time, completing her degree in plant and soil science and playing saxophone in the band.  A Mount Morris native, she was attracted to the University’s program for her major as well as the beauty of the campus and the family atmosphere, she said.

“It’s just kind of that good old southern hospitality,” Vicky said. “SIU is a ‘big time’ University in a ‘small town’ setting.  That is what attracted me to the University and keeps my support.  We love the location and the beauty and the diversity of the campus.”

Jim and Vicky married in 1982 and both worked for the state for many years before retiring.  But their connection to SIU Carbondale remains very strong.  They are longtime Saluki basketball and football season ticket holders, bringing Jimmy, Kristi, Emily and Jeffrey along.  In fact, Emily attended her first football game when she was about a week old.

Jim and Vicky also return each year to play in the alumni band at homecoming and even fill in with the pep band at sporting events during breaks when many students aren’t on campus.  They’re lifetime members of the SIU Alumni Association and all four of their children belong as well.  And, they’ve made the 45-minute jaunt from Chester to Carbondale countless times through the years to attend musical and theatrical events and more.

“There’s a real cultural connection with the University,” Vicky said.

Jim went on to earn his doctorate in rehabilitation administration and Vicky her master’s in vocational education at the University as well.   Their siblings joined them as alumni with Jim’s brother Phillip earning a degree in education in the 1960s and Vicky’s sister Sheri (Hagemann) Taylor completing a physical therapy degree in the 1980s.  Meanwhile, Jim and Vicky’s family continued to attend all sorts of activities on campus.

So, when it was time for college, what would the Beers children decide to do?  Would they follow in their parents’ footsteps or chart different paths?

Jimmy is the oldest and first to decide that SIU Carbondale is just where he wanted to be.  He earned his bachelor’s degree in music in 2010 and the percussionist is now working on his master’s.  He plans to become a freelance musician, taking his drum set expertise to Chicago or Nashville with plans to play jazz, rock, funk or some fusion of those genres.

“Growing up, I attended a lot of sporting events, marching productions, theater events and everything here and I already felt a sense of community with groups on campus and I really liked what they were doing.  SIU is close enough to my family that I can go see them but far enough away to allow me to do my own thing and it offers affordability,” Jimmy said.

He has worked as a music undergraduate assistant and graduate assistant on campus, played in Marching Salukis four years and participated in a variety of music ensembles, groups and events while also serving on the Fine Arts Activity Fee committee.  He said life at the University has been a great experience for him.

“I’ve had very strong instructors who do a great job, not only presenting the material and teaching me but in how they weave everything together in my life.  They’ve helped me grow into this person I like to be and that’s the most important thing of all,” Jimmy added.

Next in line came Kristi.

“I never really thought of going anywhere else,” she said.  A flutist, she had come to love the University as a child and said she really enjoys being on campus.  A childhood babysitting job convinced her that she wanted to be a kindergarten teacher.

“That’s my big dream.  I’ve always loved little kids and babysitting for a family for about 10 years, I watched those kids grow up and saw how they learned and changed.  They’re so much fun,” she said.   After working for a time as an orientation leader for New Student Orientation, Kristi began working at Rainbow’s End Child Development Center and quickly knew her career choice was right for her.

“I met a lot of amazing people there.  I just love the kids, the parents and the people who work there.  I learned so much,” she said.

“I really enjoyed my program too.  I love my professors.  They have personally helped me every way they can.  The University offers excellent classes and curriculum,” she added.

Emily, a junior, is undecided on her major but is seriously considering following in her mother’s footsteps and pursuing her degree in general horticulture.  One thing has been certain for her from the beginning though.

“I’m a really big family person and I wanted to follow the tradition and come to SIU.  I really didn’t think of anyplace else.  It is a really good school,” she said.

Emily said the University and it’s faculty and staff have been particularly helpful to her as she tries to decide her career path.

“I know the advisers and they are great.  No matter where you go here on campus, there’s someone there to help you.  They are very nice, very helpful.  I’m really shy and I don’t always ask questions like I should but they are so good to help me figure things out, decide what classes I should take and everything,” she said.

The youngest of the Beers siblings is Jeffery, a sophomore music major and tuba player.  He considered going elsewhere, even earning a scholarship to another university with a prestigious music program.  But, his family’s longtime association with SIU and the fact that he was already “comfortable” with the University drew him to Carbondale.

Another big influence on his decision was the faculty at SIU Carbondale, in particular Chris Combest, lecturer in tuba and euphonium for the School of Music.

“Dr. Combest was extremely nice and was pulling for me here,” Jeffery said.

Jeffery was a member of the marching band and wind ensemble on campus last year and has played with the Southern Illinois Symphony orchestra as well.  His goal is to perform professionally, preferably with a symphony orchestra or even a military band, he said, and he’s convinced the education he gets at SIU Carbondale can make his dream a reality.

Jim and Vicky say they’re likewise sure their children will be successful in life and happy with the educations they’re receiving at the University.  They obviously speak from experience.

“SIU Carbondale gave me a very good education and a very good career,” Jim said.  He said that no matter where he goes, people continue to be impressed when they learn he earned both post-baccalaureate degrees from the University’s “world-renowned” rehabilitation program.

“SIU is the place to go, the epitome of a good rehab program in my day.  There is a lot of prestige and honor associated with that program,” Jim said.

He and Vicky echoed the praises their children offer for the faculty, staff and academics at the University as well, and say the friends and connections they have made through SIU continue and remain strong.

Jim, who currently helps out as wellness coordinator for the Chester school district, said he’s such a staunch supporter of the University that “I’m known in Chester as Mr. SIU.  I feel so strongly about it.”