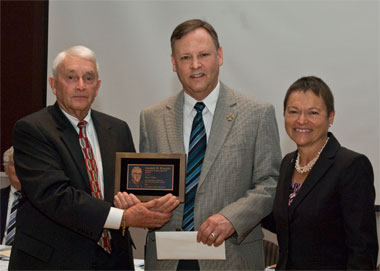 You will find him working with the Boy Scouts and local youth baseball and soccer programs, assisting the Murphysboro High School Crimson Express band, building sets, and assisting the elderly in numerous areas.  Erbes finds joy in helping people.

The interim director of the Southern Illinois University School of Law Legal Clinic, Erbes views his varied volunteer efforts to be an extension of why he became an attorney -- to assist others.  It is that passion and community service that today (March 22) earned him the 2012 Lindell W. Sturgis Memorial Public Service Award.  The SIU Board of Trustees presented the award and plaque to Erbes during a ceremony at the Student Center.  His name will also go on a permanent plaque hanging in Anthony Hall.

“John is an outstanding choice for this honor,” Chancellor Rita Cheng said.  “He continues to make a positive difference through his commitment to education and public service.”

Erbes was “completely surprised” upon learning of the award.

“Looking at the list of people who have received this award makes it even more of an honor,” he said.  “I don’t do volunteer work for the reward but I do get a lot out of it.  It’s enjoyable and personally rewarding.”

“John’s service to the public is just ‘who John is,’ wrote nominator Rebecca J. O’Neill, a clinical professor at the law school and 2005 Sturgis Award recipient.  “John goes far beyond what other people do to help others in his work, in his profession, and throughout the community.  John is pleasant, patient and kind.  John Erbes has made a major impact on the people he serves and on the community.”

Erbes is also a visiting assistant professor at the law school and has nearly 33 years of law practice and more than 19 years teaching experience.  A native of Rockford, Erbes earned his bachelor’s degree in 1976 from Western Illinois University, and his law degree in 1979 from the SIU School of Law.

“Professor Erbes is well deserving of this prestigious award,” said Cynthia L. Fountaine, dean of the SIU School of Law.  “His service to the law school, the University, the legal profession, and the community is exemplary.  SIU Law is lucky to have him.  He is a role model for each of us, and we are very proud that he has received this recognition.”

O’Neill has worked with Erbes in the civil practice portion of the legal clinic for 13 years, and wrote that Erbes’ many volunteer efforts also extend to the legal profession.

He is an advisory council member for Shawnee Alliance for Seniors, and the Illinois Department of Aging ombudsman program.  He is on the board and a former president of the Illinois Guardianship Association, which promotes guardianship issues and proposes legislation for guardians of disabled adults and the elderly.  Erbes served on the state’s Guardianship Reform Task Force, and is on the board of directors of the Land of Lincoln Legal Assistance Foundation.  In December 2010, Erbes and O’Neill earned the Human Rights Day Award from the Southern Illinois Chapter of the United Nations Association of the USA for the legal clinic’s work in protecting senior citizens against abuse and human rights violations.

Erbes has been a member of the Jackson County Board of Health since 1988, and is serving his 16th term as board president going back to 1994.  The county health board was one of Erbes’ first volunteer efforts and as an attorney new to the area, saw the opportunity as a great way to become involved, he said.

“Living in a small town you begin to realize that that many people are involved, and that good things are able to happen in communities like Murphysboro because people put in a lot of volunteer hours,” he said.

Miriam Link-Mullison, Jackson County Health Department administrator, wrote that during a time of expanding public services, Erbes has been there to help guide department expansion, and contributed in developing policy-setting priorities and adopting sound fiscal practices.  He has also assisted in making connections between the community, the law school, and public health, she wrote.

“John’s longevity as well as his even-tempered manner have provided the Board of Health with stability and sound decision making,” she wrote.

The community involvement also extends to his former church, The First Presbyterian Church of Murphysboro, where he was an ordained deacon, ordained ruling elder, and senior high Sunday school teacher. Erbes and his family currently attend another church.

Erbes and his wife, Julie, live in Murphysboro.  The couple has two sons, Andrew, 25, and Aaron, 20.

He credits his children’s activities while they were growing up as key to many of his volunteer efforts, laughing that at times his sons “really kind of pushed me … or they volunteered me.”  But those are important moments for families to share, and Erbes enjoyed every moment.

“It becomes a part of your lifestyle; especially over the last 20 years, so much of it has been involved with what our children were doing.  We would have been doing those things or watching them from the sidelines but it’s a lot more fun and a lot more meaningful to be involved,” Erbes said.

Those activities include being an adult leader with Boy Scout Troop 4 in Murphysboro; coaching in Murphysboro youth baseball and Carbondale soccer programs; building sets for high school musical and theatrical performances; and being very active as a Murphysboro High School Crimson Express band booster and board member.  He was also on the board of the Southern Illinois Children’s Choir.

Mike Koberstein, former band booster president, wrote that Erbes’ counsel “provided many insights as we developed policies and practices to support both our fundraising efforts as well as provide guidelines to ensure safe and educational activities and trips for the high school students.”  But Erbes also was part of the booster club’s cook team on several summer and fall trips to destinations including St. Louis, Chicago, Washington, D.C., and New York City.  The sometimes “exhausting” schedule included making three meals and frequent snacks daily, often along the road, for band competitions, for 60 to 75 “high-energy” high school students, Koberstein wrote.

“Often this volunteer duty allowed John the side benefit of spending the night on the floor of the host school, prior to his rising at dawn to assist with breakfast preparation,” he wrote.

Heidi Ramos, a clinical assistant professor at the legal clinic, wrote that Erbes has been “an outstanding mentor and friend.”  In addition to his regular public service work, he gladly offers his time to speak on topics that include elder abuse, Alzheimer’s, and legal issues for caregivers.

“I’ve never known John to turn down any request for his assistance with a training, presentation or speaking to a class,” she wrote.   “His contributions to the elder population of Illinois and those persons serving the elderly are immeasurable.  The positive impact made by John’s participation in these presentations reflects positively not only on him, but on the University as well.”

Erbes views his volunteer efforts as an extension of practicing law, something which he reminds his students.  He also remembers advice his father offered.

“He told me that if I was going to do something, to do it to the best of my ability.  I take that approach with my job or whatever it is I am doing.” 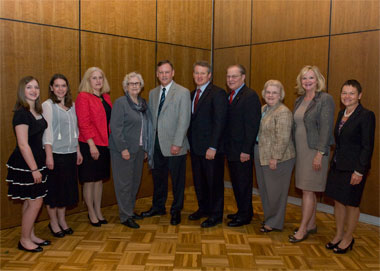