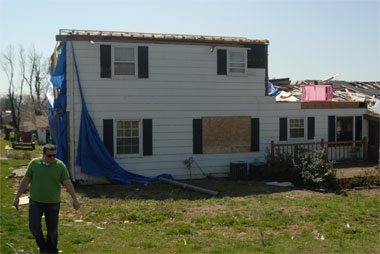 Helping rebuild a community -- Jason Skidmore, a graduate student in Southern Illinois University Carbondale’s architecture program, walks from a Harrisburg home damaged by a deadly Feb. 29 tornado.  Skidmore, who is from Mount Vernon, and nine other undergraduate and graduate students in the University’s School of Architecture, spent eight days over spring break providing design assistance and consultation to more than 23 families whose homes were lost or partially destroyed.  (Photo provided)

Design help in Harrisburg: ‘The right thing to do’

CARBONDALE, Ill. -- For Sufiyana Momoh and several other students in Southern Illinois University Carbondale’s School of Architecture program, spring break 2012 wasn’t about taking a break from studies. The focus was on sharing their passion while helping others.

Momeh was among those providing design assistance and consultation to families whose homes were lost or partially destroyed in the deadly Feb. 29 tornado that hit Harrisburg and other parts of the region.  Two faculty members, 10 students, and one alumnus spent eight days, March 10-17, providing design assistance to more than 23 families -- completing 20 new home designs and three structural consultations.

“It made us feel good that we are helping people,” said Momeh, a junior in architectural studies from Port-Harcourt, Nigeria.  “Most of us are in this field because of our passion; we have passion for what we want to do.  There is no better feeling than doing what you want to do and making people feel happy about what you are doing.”

Jon Davey, architecture professor, interior designer and E.J. and Mary C. Simon Distinguished Faculty, came up with the idea shortly after the tornado hit.  There is a lull between the time a storm hits, cleanup efforts, and when construction starts, so students had a chance to help and learn.

“It was the right thing to do,” Davey said.

Several student volunteers spent time away from paying jobs to meet with the families, visit the homes, discuss rebuilding needs, and assist in designing new homes.

For a majority of the students, this was the first time to talk with clients on a project.  Moving from classroom theory into fieldwork was important, said Megan Crider, a sophomore in interior design from Marion.

“This involved real people.  The damage was really devastating,” she said.  “You see it on the news and that is one thing.  But when you see it and are then involved with the people it becomes much deeper.”

Richard Master, a sophomore in architectural studies from Woodstock, said it was a nice experience to have an actual client.

“It was a brand new experience and I found it was very helpful,” he said.

Students met with clients, visited properties, took photographs, and gathered information on areas including the locations of utilities, property lines, driveways, sidewalks and other details.  The students used architecture design software, including 3-D tools, to give their clients the opportunity to see what their new homes could look like.

“This was our introduction to working with people, design problems, and constraints,” Crider said.  “It was a very humbling experience.  I’m really glad we had the opportunity to do this.”

Many of the new homes will feature sustainable concepts, including six-inch walls for more insulation.  There was also another common request: a basement, Davey said.  The group also suggested Federal Emergency Management Agency recommendations for a “safe room” within the home if the homeowner did not choose a basement.

Davey recalls two of the families he met.  One storm victim recounted how he saw his son holding onto the side of a wall parallel to the ground when the tornado struck.  “He just said, ‘I’m building a basement.  I’m not going to have that happen again,’” Davey said.  Another family, meanwhile, opted for a basement rather than rebuild a second story onto their home.

Most of the families already had insurance checks for their loss and contractors lined up.  The students’ work filled an important gap, however, as families will take the designs to contractors.  For the families, many of whom lost nearly everything -- clothes, possessions and family treasures -- while escaping with their lives, receiving a computer printout of a floor plan design was meaningful, Davey said.

Another large part of the picture came not just in offering architectural drawings, but also personal help and friendship, Davey said.

“People had in mind pretty much what they wanted and we were just trying to get it on paper for them,” he said.

Davey credits the students’ efforts; they arrived early, stayed late, and took work home with them.  The studio they set up in the Harrisburg Public Library turned into an architecture office that students took over themselves.

“They did it.  These guys did it,” Davey said. “It was a completely different structure than the classroom.”

This is the first time Davey has tried a project like this with students when it comes to assisting with disasters in the region. Davey would like to see the effort expand into a disaster design assistance team where students also have the ability to help in rebuilding a home, giving students a complete hands-on opportunity.

The eight-day experience and listening to stories of what Harrisburg residents are dealing with, was “very humbling,” said Jason Skidmore of Mount Vernon, a graduate student in architecture. Offering his help “was the least I could do to help the victims, who are now rebuilding their lives.”

“The experience echoes the need for professionals in many fields to be altruistic,” he said.  “The professors I have had in the School of Architecture have done a great job providing us an avenue to use our skills to help out in communities like Harrisburg and New Orleans.”