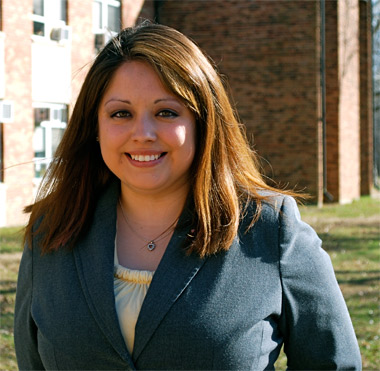 CARBONDALE, Ill. -- A criminology and criminal justice student at Southern Illinois University Carbondale will travel to Washington, D.C., to join the elite on the Hill.

Esmeralda Zamora, a senior from Waukegan, will participate in the annual Posters on the Hill academic event, hosted by the Council on Undergraduate Research (CUR).  Zamora will present her research on mental illness in correctional institutions before lawmakers on April 24.  CUR selects only about eight percent of the hundreds of applicants to participate in Posters on the Hill.

“We are extremely proud of Esmeralda and know she will be a great ambassador for our University,” Chancellor Rita Cheng said.  “This achievement reflects her passion for research and for making a positive difference, and the commitment of our faculty to student success.  There are not many universities that place as much emphasis on involving undergraduate students in research as we do.”

Zamora is the sixth SIU Carbondale student since 2007 to earn an invitation to participate in the Posters on the Hill event.

Kimberly Leonard, dean of the College of Liberal Arts, said, “I’m so glad for Ms. Zamora and the Department of Criminology and Criminal Justice.  The many undergraduate research opportunities on this campus are another vehicle by which SIU faculty, working in a high-level research university, show interest in mentoring young scholars.”

Zamora began her research when she held a double major in criminology and criminal justice and psychology.  She earned a spot in the competitive McNair Scholars Program for SIU Carbondale undergraduates.  She knew she wanted a project that would cross over her two majors.  Accordingly, she approached Meera Komarraju, director of the undergraduate psychology program, for advice.  Komarraju put her in touch with Daryl Kroner, associate professor of criminology and criminal justice and an expert in correctional intervention, offender assessment, and mentally ill offenders.

“I was nervous, I met Dr. Kroner for the first time and I asked him to be my mentor,” Zamora said.  Not only did Kroner act as her mentor for the McNair Scholars Program, but also he was also instrumental in encouraging Zamora to apply for Posters on the Hill.  He is also helping her prepare her research project for publication as a paper.

Kroner noted that a research poster such as Zamora’s represents the equivalent of three to six credit hours of work, or one or two college classes worth of research.

“This poster went through a highly competitive selection process,” he added.  “The Center for Undergraduate Research accepted just over 70 posters from nearly 900 submissions.”

Joseph Schaefer, professor and interim chair of the Department of Criminology and Criminal Justice, said that providing guided undergraduate research opportunities is a priority for his department, and for the University as a whole.

“Ms. Zamora has been active in pursuing such chances,” he said.  “Being selected for this prestigious honor is a testament to her hard work, her diligence in developing strong research skills, and the important efforts she is making to advance insight into matters of real-world significance.”

Zamora’s research focus was on those already in correctional institutions and diagnosed with mental illness.  She focused on depression and schizophrenia, and accessed data both from federal and state correctional facilities. Though she was using data collected previously, Zamora was still required to observe the standards set by the U.S. Department of Health and Human Services for “human subjects compliance.”  She noted that even preparing to conduct research was a learning experience.

Zamora said there is evidence of a relationship between an individual’s criminal history and his or her behavior once incarcerated.  She wanted to know how mental illness factored into that relationship.  She hoped to learn if there were behavioral trends in these offenders that might help predict violent and non-violent offenses committed within the correctional facility itself.

Zamora used data with a federal institution sample of 3,686 individual offenders and a State of Illinois sample of 14,499 individual offenders.  She found, ultimately, that some symptoms of depression -- anger, feelings of isolation, and extreme restlessness -- were good predictors for both violent and non-violent crime.  However, symptoms of schizophrenia did not seem to predict violent behavior, but schizophrenic delusions and hallucinations did seem to lead to verbal assaults.

Zamora said she hopes to explore these findings further, perhaps in graduate school.  She said future research would examine other factors, such as age, gender, race or ethnicity, and level of education.  She’d like to see if those elements combined with mental illness may also contribute to post-incarceration behavior problems.

Zamora said she came to SIU Carbondale after beginning her college career elsewhere.  She found SIU to be the perfect fit.

“When I first came here, I had no idea what I was going to do besides just finish my degree,” she said.  “I attended a Registered Student Organization fair here, and it was unlike any other such event I’d attended.  I met people right away, and wanted to get involved in campus activities.  I’d been very involved in things in high school, but was not when I first attended college.  At SIU, it was easy to find an RSO for my major and my interests.”

In addition to her involvement in the McNair Scholars Program, Zamora is vice president of SPEAR (Students Promoting Educational Advancement and Research), secretary for the SIU Criminal Justice Association, and a Saluki Volunteer Corps member.  She also recently pledged to the Kappa Delta Chi Sorority, Inc., a service-based organization.

Zamora said her post-graduate school plans include work in the field and then, ultimately, teaching.  In this, she said, she draws inspiration from her mentor.

“Dr. Kroner has field experience as do several of my other professors,” she said.  “It adds so much to the classroom to hear them talk about their experiences, what they’ve actually done, not just studied.

“SIU gave me the opportunity to get involved outside the classroom, and put me in touch with professors who encouraged me to participate in class and in research,” she said.

Posters on the Hill is April 23-24.  Zamora will have the opportunity to meet with members of the Illinois congressional delegation, to present her research and view other research examples and meet other students from around the country.  She also will participate in field trips to destinations such as the National Archives, the Smithsonian Institution Museum of Natural History and the United States Supreme Court.

The Council on Undergraduate Research is a not-for-profit educational organization supporting and promoting collaborative research and scholarship by undergraduate students and faculty mentors.