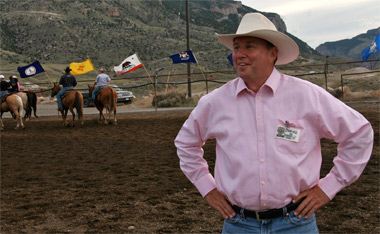 Cowboy photographer -- H.D. Motyl, assistant professor of media production and writing, is shown at the Cody Stampede in Cody, Wyo.  It was one of the many rodeos at which Motyl and his crew filmed and photographed several riders on the professional rodeo circuit for a feature documentary and photo exhibit.  The photo exhibit “Cowboy Christmas:  Photographs from the Rodeo” is now on display at the Morris Library Rotunda Art Space and a reception with Motyl is set for 5-7 p.m. on Jan. 20.  (Photo provided) Download Photo Here

CARBONDALE, Ill. -- You can experience the life of a cowboy, albeit vicariously, through a special display now at Southern Illinois University Carbondale’s Morris Library.

“Cowboy Christmas:  Photographs from the Rodeo” is the exhibit in the Rotunda Art Space through the end of the month.  And, a special reception on Friday, Jan. 20, from 5 to 7 p.m. will offer a chance to meet the artist and view another of his films.

H.D. Motyl, assistant professor in the Department of Radio-Television and filmmaker, and his crew spent the summer of 2009 following four men as they travelled and competed on the professional rodeo circuit.  Motyl and his assistants videotaped the wranglers moment by moment, inside and outside of the rodeo arena, illustrating the passion these westerners have for the rodeo, its fame and fortune.

The feature-length documentary chronicles the lives of three Texans, Matt Reeves of Stephenville, Darrell Petry of Beaumont and Britt Walters of Huntsville, as well as Jule Hazen of Protection, Kan.   A Faculty Development Grant from the SIU Carbondale Office of Sponsored Projects Administration (formerly ORDA) facilitated filming of the documentary, “Cowboy Christmas,” and editing is still ongoing.

Along with the video, Motyl and his crew shot numerous photographs of the cowboys as they traveled through Texas, New Mexico, Colorado, Wyoming, Utah and Nebraska over a three-week period.  A collection of about 18 of these portraits and images are now on display at Morris Library.   The large photos give a poignant look at a life most people know little about.  Motyl said the video and photo exhibit get their names from the two-week period leading up to Independence Day during which there are nearly 50 rodeos in 19 states, enabling cowboys to win substantial money if they go to as many as possible and perform well.

While Motyl shot the vast majority of the pictures, there are also a few by two recent graduates of the University’s College of Mass Communications and Media Arts: Benjamin Wilson, a 2010 master of fine arts graduate, and Kathy Stanish, who earned her bachelor’s in radio-television in 2009.   Ryan Jenkins, a MCMA master of fine arts student, printed the photos for the exhibit.

During the reception, you can view the photos and meet Motyl.  In addition, there will be a special showing of his artistic video, “Nudes Descending A Staircase #2” at 6 p.m. in the Library’s Guyon Auditorium.  Filmed at Morris Library with 21st-century technology, the video inspired by the Marcel Duchamp painting is the first in a series of three video installations Motyl plans to create.

Motyl, who holds an MFA from Northwestern University and a bachelor’s from Pennsylvania State University, joined the SIU Carbondale faculty in 2007.  He teaches media production and writing and has written and produced documentaries for a number of media including The History Channel, National Geographic Channel and A & E.  He’s also created assorted educational and home video works, including the popular “Image of an Association:  A New Look at the Zapruder Film.”

For more information about “Cowboy Christmas:  Photographs from the Rodeo” or having an exhibit in the Morris Library Rotunda Art Space, contact Megan Lotts, fine arts library and assistant professor, at mlotts@lib.siu.edu or by calling 618/453-2663, or look online at http://www.lib.siu.edu/footer-portlets/about-the-library/rotunda-art-space.  You can also view previous rotunda exhibits at http://www.lib.siu.edu/footer-portlets/about-the-library/photo-galleries.