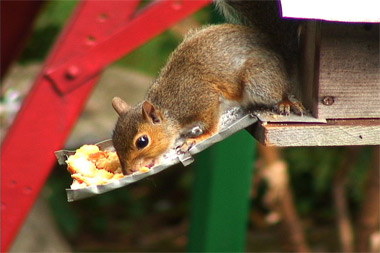 A look at squirrel-ly behavior -- The ingenuity and determination of a man and a squirrel are the focus of a documentary by Lilly A. Boruszkowski, an associate professor in Cinema and Photography at Southern Illinois University Carbondale.  The film, “Stan versus Squirrel,” chronicles the efforts of Boruszkowski’s father, Stan, to keep squirrels from stealing food he sets out for birds to eat from a homemade birdhouse.  The film has earned numerous awards. Download Photo Here

Film wins awards for tale of man vs. squirrel

CARBONDALE, Ill. -- The origins of interesting and insightful documentaries do not need to come from distant lands that focus on human tragedies and social upheaval. They can come from one’s own back yard.

Literally.  Documentaries can also focus on the ingenuity and determination of one man, and a squirrel, to outfox one another.

Lilly A. Boruszkowski, an associate professor in Cinema and Photography at Southern Illinois University Carbondale, chronicles the dynamics of invention, success and compromise in an award-winning film that looks at her father’s efforts to keep squirrels from scampering off with food set aside for an array of birds.

Shot in her father’s back yard during the fall of 2009 and 2010, the documentary chronicles the efforts of Stan Boruszkowski to thwart attempts of squirrels to steal bread and muffin crumbs he sets out for birds on a homemade birdhouse.  The film also shows how squirrels evade various homemade devices to get food in the backyard of the Union, N.J., home where Lilly Boruszkowski grew up.

She decided to make the film when her father, now 84, began telling her of his efforts to keep the squirrels from climbing a pole to the birdhouse.  Boruszkowski has done other documentary films on local artists because of her attraction to their work and the person behind the work.

“There are interesting people all over,” she said.  “You could probably look at the block you live on and there would be someone on that block who does something unusual, interesting or fascinating in some way,” said Boruszkowski, who came to SIU Carbondale in 1982.

Boruszkowski teaches different levels of film production classes, and will teach a documentary production class and advanced film editing class next semester. Documentaries are most effective when filmmakers provide a portrait of a person through something they are engaged in “and that’s what really shows who they are -- it shows an aspect of their personality,” she said.

It was her father’s “sheer Rube Goldberg inventiveness” in trying to solve the problem of the squirrels that prompted Boruszkowski to tell the story.  Boruszkowski shot film from a window in a room of her childhood home over a total of 11 days, waiting vigilantly for any action.  During the experience she gained great empathy for wildlife photographers “who just have to sit around and wait,” she said.

The film also focuses on the squirrels going through trial and error to figure out how to beat the numerous obstacles her father puts before them.  Those include a disposable aluminum tray around the pole, a hanging basket filled with food from a nearby clothesline, and a flat platform in place of the birdhouse.  Her father finally finds one solution, but later decides to build a new birdhouse and the birds and squirrels coexist peacefully.

“He’s an inventor, just the way the squirrels are inventive about how they get the food,” she said.

Boruszkowski believes many people can relate to the type of battle her father engages in.  Another consideration is how her father goes about working to solve the problem, along with his attitude and desire to help the birds, she said.

“It’s a not uncommon battle between man and squirrel,” she said.  “I think it’s very much a ‘retired guy’ thing.  You are not going to find a hedge fund manager out there doing this.  I think it has to do with ‘I’m the master of my realm,’ and the realm includes the backyard and what happens in the backyard.”

While her father is “pleasantly surprised” with the film’s success, it wasn’t until he saw how engaged some of his friends were while watching it that he began to realize the emotional ties the tale brings, Boruszkowski said.

“There are certainly a lot more important issues in the world today for people to make documentaries about.  To see my film be able to stand on some kind of playing field with those surprises me.  But the piece makes people laugh, and we always need to laugh.  I think we need to laugh at ourselves, as well,” she said.