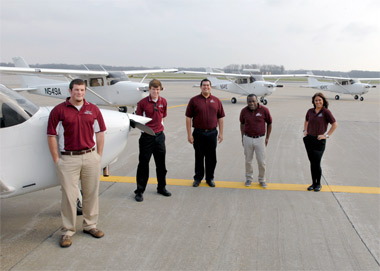 Flying high -- Students in Southern Illinois University Carbondale’s nationally recognized aviation flight program have the benefit of state-of-the-art equipment with these Cessna 172R Skyhawks. The planes are the first in the program to feature avionics glass cockpit technology.  Pictured with four of the planes are the aviation flight and aviation management students who helped fly the planes to Southern Illinois Airport Thursday, Dec. 8.  From left are: Scott A. Blair, a senior from Bloomington; Taylor M. Breum, a junior from Lake Villa; Christian Padilla, a senior from Summit; David J. Bias, a junior from Chicago; and Jordan DiGrazia, a senior, from Crystal Lake.  (Photo by Russell Bailey) Download Photo Here

Five new Cessna 172R Skyhawk planes arrived about 8 p.m. Thursday (Dec. 8) at the Southern Illinois Airport, and will integrate into the program’s existing fleet in the spring.  The new planes from the Wichita, Kan.-based aircraft manufacturer are the first in the program to feature state-of-the-art avionics glass cockpit technology.

“This will bring a whole new dimension to the program,” David A. NewMyer, chair of the Department of Aviation Management and Flight, said, noting faculty and students have been eagerly anticipating the new planes.  “We will be able to teach in a technology that the aviation industry is using today.”

“We are very pleased to add five new Cessna airplanes to our fleet,” said Terry A. Owens, interim dean of the College of Applied Sciences and Arts.  “These are the first new airplanes added to the fleet since 2003 and the purchase is completely paid for by student-generated flight fees.  The glass cockpit technology in these planes will enable our students to experience first-hand digital instrument displays, which will better prepare our graduates to move into the airline industry.”

With some “wonderful” incentives from Cessna and trade-in values, the total cost of the new planes is $1.29 million.  A multi-year payment plan that utilizes student flight fees will cover the purchase price.

The planes will be used in courses that lead to the Federal Aviation Administration Commercial Pilot Certificate, NewMyer said.

“The students at SIU learning to fly in these 172s are going to get the latest advancements in technology -- an all-glass cockpit, the first in the SIU fleet,” said Michael Gomm, Cessna’s manager of fleet propeller sales. “These new 172s will be added to their existing training fleet of all Cessna aircraft.”

In addition to receiving state-of-the-art airplanes, the purchase is also significant for student recruitment, NewMyer said.  The program in December 2008 received a flight simulator that also features the Garmin G-1000 avionics package.  A second Garmin 1000 equipped simulator will arrive with the opening of the Transportation Education Center next fall.

Competing aviation programs at other universities will no longer be able to say SIU Carbondale’s program doesn’t have glass instrument cockpits in its planes or simulators, NewMyer said.

“We will be well-covered,” he said.  “We have the ability to compete with everybody else.”

With the purchase, the program has 38 flight training aircraft.  The majority of planes feature fixed landing gear but several have retractable landing gear.

With the Flying Salukis earning a seventh National Intercollegiate Flying Association title in May, and the anticipated move next fall into the Transportation Education Center, interest in the University’s aviation programs continues to increase. The aviation flight program is already at 200 total applications for the fall 2012 semester, and NewMyer anticipates 80 students will be accepted into the program. That follows the admission of 88 students in fall 2011, one of the largest beginning classes in aviation flight in recent years.

Hiring in the aviation industry is at a rapid pace from just a year ago when it was “virtually zero,” NewMyer said.  Some airlines are beginning advanced pilot training classes with open seats because of a pilot shortage, he said.

More information on the University’s aviation programs is available at www.aviation.siuc.edu/.

3:00 PM to 4:30 PM - Morris Library 1st FL Rotunda and Guyon Auditorium: Dr. E. Faye Williams, Esq. will speak about and sign her book Dick Gregory: Wake Up and Stay Woke: Running for Life. Dr. Williams' written portrait explores her rich friendship with Dick Gregory and tells many interesting stories of his life as an unwavering activist, comedian, health enthusiast and purveyor of good music. Interview will be conducted by Pepper Holder