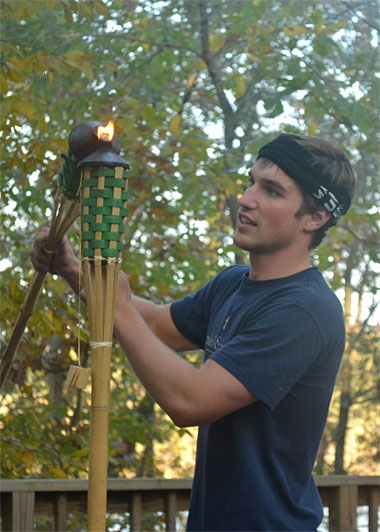 CARBONDALE, Ill. -- After three days of sometimes frigid temperatures, difficult challenges, fatigue and tough battles against strong Southern Illinois University Carbondale competitors, it all came down to a final vote.

The verdict?  Jordan Kabat of Scheller is THE 2011 Ultimate Saluki.

The nine men and three women tested their mettle in many ways during a recent long weekend at the University’s Touch of Nature Environmental Center.  And, as do their TV counterparts, they built alliances in order to stay alive in the contest.

The contestants answered Saluki trivia questions as they balanced buckets on their heads.  A right answer meant you got to decide which bucket got another cup of water.  During “Paddle and Pop,” team members secured three numbers from spots on campus lake via paddleboat, canoe or swimming, thus acquiring the “combination” to unlock a box with darts.  They threw the darts to pop balloons bearing the names of tribe members to eliminate them from the competition.

“All of the challenges were a blast, but the most fun was the final challenge.  It involved portions from a lot of the previous challenges that we had done, combined into one big competition.  We had to build a fire, solve a tanagram, canoe, run about 1.5 miles and then solve a memory path problem.  The winner of that was guaranteed a spot in the final three,” Kabat said.

Kabat wasn’t able to win that challenge, though, as Anthony Drake of Danville did.  But, Kabat had found the hidden immunity idol, thus helping him secure a spot in the final three with Drake and Ryan Ratajczyk of DuBois.

Making it that far in the contest wasn’t easy, but it was rewarding, the competitors say.

For Kabat, “the toughest portion for me was actually sleeping outside…with only a fire and the clothes I brought.   There were six of us around the fire so we each tried to get as close to the fire as we could while also allowing our teammates an equal amount of warmth.  Since there was only so much room, I had to decide what part of my body I wanted to heat -- my head or my feet.  One of the guys on our team only slept about 15 minutes that night, but I was able to sleep about five hours.  This uncomfortable situation was definitely the most difficult part of the weekend.”

Yet, despite the cold and sometimes challenging conditions, Kabat said the Ultimate Saluki competition was rewarding in many ways.

“It was one of the best, if not the best, events I have been involved with at SIU Carbondale. The most rewarding part seems like a cliché answer, but it was honestly being out there all weekend in such an intense, Survivor-like atmosphere. I was able to meet a lot of new people and create new friendships.  Additionally, I was able to challenge myself and see how much I could push myself. I had a ton of fun, made a lot of friendships, learned more about myself and won a lot of cool prizes along the way,” Kabat said.

Kabat said the experience is a wonderful way to wrap up his college years.  He’ll graduate this month and has accepted a job in Evansville, Ind., with Peabody Energy.

In a thank-you email to Recreational Sports and Services staff, fifth-place finisher Keith Rader of Carbondale wrote,” I could not possibly thank you all enough for all the time and effort you each put forth in creating, planning and putting on the USC.  It’s hard to process how much thought and effort was needed to execute an event that complex so well.  It was an experience that I will never forget.  At the risk of sounding dramatic, it was honestly life changing.  I did things I thought I was incapable of doing and learned things about myself that I would be incapable of learning through other avenues.”

Kabat, Rader and the other contestants vied for a large assortment of prizes, won not only for placing at the end of the contest but also for winning challenges along the way.  They emerged with prizes including a $500 book certificate, an iPad, round trip bus tickets to Chicago, prize packages from the Student Recreation Center, a Missouri Valley Conference package including tickets for two and lodging in St. Louis for the Missouri Valley Conference basketball tournament in March, and much more.

“The 2011 Ultimate Saluki Challenge, an annual event in its sixth year, gave those who participated an experience unlike anything else during their time at SIU Carbondale,” said Sally Wright, associate director-programs for Recreational Sports and Services.  “Additionally, this event provided an opportunity for many student volunteers to practice what they’ve been learning in the classroom, including photography and videography as well as being involved with the planning and execution of this major, three-day event.”

The contestants for the 2011 Ultimate Saluki Challenge, listed by hometown with year and major, and also their place in the competition if they made the top five, were: