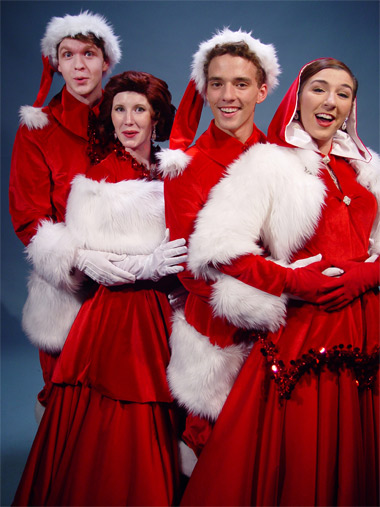 CARBONDALE, Ill. -- The grand thing about the theater is that the director really can control the weather.  The forecast for “Irving Berlin’s White Christmas” calls for snow, and snow there will be -- inside the McLeod Theater.

“Irving Berlin’s White Christmas,” a stage adaptation of the classic movie musical, comes to the McLeod at Southern Illinois University Carbondale Dec. 7-11.  Performances begin at 7:30 p.m., except for Sunday, which is a 2 p.m. matinee performance.

J. Thomas Kidd, chair of the department and director of the play, said this may be “the most extravagant production we’ve ever produced.”

How extravagant is that?  Try more than 2,000 pounds of scenery, 26 cast members, 206 costumes, not to mention singing, dancing, music and snow.  And when it snows, it won’t do so just on stage -- the audience gets in on what might be considered a “4-D” production.

The play (and the movie) tell the story of two song and dance men, Bob Wallace and Phil Davis, formerly Army buddies, who team up to help out their former commanding officer.  In the process, they find love and present some of Berlin’s most famous songs, including, of course, “White Christmas.”

The play features students and community actors.  Here are the SIU Carbondale students, by hometown:

Tickets are $25, with student tickets at $10.  Tickets are available at the door beginning one hour before each performance, or in advance at SouthernTicketsOnline.com, at 618/453-6000, or at the McLeod Theater or Shryock Auditorium box offices during regular office hours.  Walker’s Bluff General Store also carries tickets for this production.