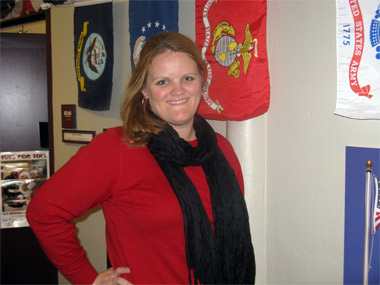 Job on campus/department you work in:  Coordinator of Veterans Services

How long at SIU Carbondale: 11 months

When you were a youngster, what did you want to be when you grew up? Astronaut

If you could choose another profession, what would it be and why? IndyCar or NASCAR driver because “I wanna go fast.”

What is something you still want to accomplish in life? Space travel

People don’t know that you … Once auditioned for Jeopardy Teen Tournament. Alex Trebek was cool.

Who inspired you and how?  George Washington. He took the fight to the enemy, in the cold, on Christmas. He then led a fledgling country. Not many would take that challenge today.

What was the first “album” you ever bought, and was it an LP, 8-track or CD?  Michael Jackson’s “Thriller.”  I even had a matching “pleather” purse with the King of Pop’s face. But I distinctly remember a 45 of Kool and the Gang’s “Celebration.”

If you could pick an actor/actress to play you in a movie, who would you pick, and why?  Charlize Theron so people will remember me as taller and thinner.

Cats or dogs?  Dogs are great therapy companions for veterans with PTSD and other disabilities. Have you ever seen a cat fetch a drink from the fridge? I didn’t think so.

What is your pet peeve? People who lie about their military record. It’s called Stolen Valor and it is shameful.

What would you like your gravestone to say about you?  “Please don’t let your dog poop here.”