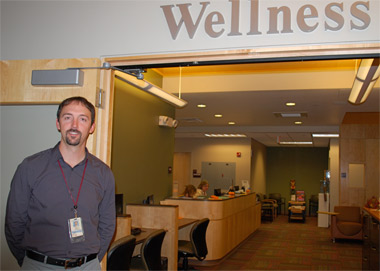 Job on campus/department you work in:  Director of the Wellness Center at Student Health Services.  The Wellness Center is responsible for providing health promotion and education to students.  We create programs and events that help students with the health behaviors that interfere with academics.

How long at SIUC:  I came to Southern Illinois University Carbondale in October 2009 from Salt Lake City, Utah

When you were a youngster, what did you want to be when you grew up?  I really wanted to be a doctor.  I was premed throughout my undergraduate career.  Just before I was going to take the MCAT, I had the opportunity to watch an open-heart surgery in the operating room.  I was fine with the blood, but the odor that came out of the man’s chest was so awful, I instantly knew that I could never be a doctor.  I guess I didn’t realize that people stink on the inside.

If you could choose another profession, what would it be and why?   Standup comedian.  I am a standup comedian connoisseur.  I have hundreds of comedy albums and DVDs.  I have even written small comedy sets that I clandestinely use on my friends and coworkers.  I treat it as market research.  So far my research says to stick with the Wellness Center gig.

What is something you still want to accomplish in life?  Outside of winning the lottery, I would love to write a novel or a series of novels.  I have delusions that I will retire on the coast of Maine where my wife and I will wear sweaters and eat clam chowder every day as we gaze into the distance.

What was the first “album” you ever bought, and was it an LP, 8-track or CD?  I hate to admit this, but in the early 90’s, Pizza Hut had a promotional album of the Teenage Mutant Ninja Turtles.  They honestly had an album of rock songs about being a pubescent mutated turtle.  I saved up my allowance to buy the cassette tape.  My younger brother and I listened to it so much that we literally wore the tape out.  Subsequently, the first concert I ever attended was the “Coming Out of Our Shells” tour, with four grown men dressed as giant Ninja Turtles “Rocking” and fighting off The Shredder.  I really wish I were making that up.

If you could pick an actor/actress to play you in a movie, who would you pick and why?

Of course, I would choose Brad Pitt.  Chances are if someone is making a movie about my life, it is probably because a disease is being named after me or because of some other crazy tragedy.  Nothing in my life deserves a movie yet.  I think that Brad Pitt provides just enough likability and is easy enough on the eyes to play me convincingly.

What is one random fact about you?  My middle name is “L.”  That’s it, just a letter.

What is your favorite food and why?  I am a foodie.  I don’t really have a favorite food.  I just love good food.  One of my favorite meals is a nice steak, steamed vegetables and cold beer.

What is your pet peeve?  When people end sentences in prepositions.

What would you like your gravestone to say about you?  My name.