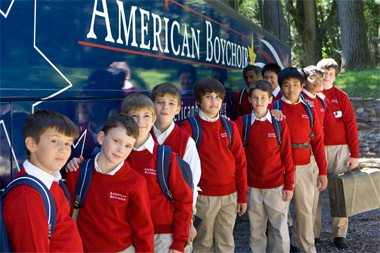 Later that day, the choir will attend a robotics class designed for group participation, and will also get a sneak preview of the Wind Ensemble’s concert.  They will attend the concert at 7:30 p.m. as a group.

The American Boychoir presents its own performance at 7:30 p.m. on Friday, Nov. 4, in Shryock Auditorium.  Tickets are $12 for general admission, $6 for students with SIU Carbondale students attending for free.

The American Boychoir holds a 74-year tradition of cultural enrichment as they tour the nation and promote music education.  The choir includes boys in grades 4-8.  The ensemble’s performing credits include guest starring with the Boston Symphony Orchestra, the Philadelphia Orchestra, and the New York Philharmonic, as well as appearances at the Tanglewood Music Festival and with such high profile performers as Wynton Marsalis, Beyoncé and Paul McCartney.

The American Boychoir School, founded in Columbus, Ohio, and now located in Princeton, N.J., is the only non-sectarian boys’ choir in the country.  Fernando Malvar-Ruiz directs the choir.