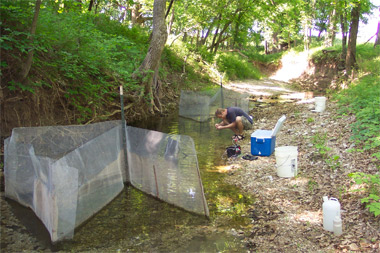 Caged out -- Southern Illinois University Carbondale graduate students will use exclusion cages and water sampling techniques such as those shown in these two photos to study what effects the absence or presence of fish, crayfish and other so-called “macroconsumers” have on water quality.  SIU Carbondale is partnering with researchers from several other universities on the $3.3 million project funded by the National Science Foundation that will tell us more about water quality over a large swath of North America, stretching from the tundra to the tropics.  (Photo provided) Download Photo Here

CARBONDALE, Ill. -- Water is the basis for all life on the planet, and a researcher at Southern Illinois University Carbondale is working on a project that will tell us more about the state of this precious substance throughout a large swath of North America and the tropics.

Matt Whiles, professor of zoology and director of the Center for Ecology at SIU Carbondale, is one of several researchers collaborating on the $3.3 million project funded by the National Science Foundation.  The University’s share of that amount is about $268,000, which will fund Whiles’ work, travel and other expenses.

The project, led by researchers at Kansas Statue University, involves experimental sites in five areas along a corridor ranging from Alaska in the north down through Puerto Rico.  At each site, researchers will manipulate the environment by manipulating so-called “macroconsumers,” which consume larger amounts of nutrients and smaller life forms in the water.

By using cages to exclude them, the researchers will look at how the presence or absence of these organisms, which include fish and crustaceans such as crayfish, affect the food web in streams.  Such effects ultimately have a direct impact on the quality of water, which takes into account such factors as how much nitrogen streams take up and process throughout the gradient, from tropics to the tundra.

Whiles said the research findings could have important implications for future water quality and management decisions.

“Given current and future water resource issues, there is increasing interest in how stream organisms can influence nutrient cycling and thus water quality,” Whiles said. “This experiment will hopefully reveal some of these connections, and how they might vary across large geographical gradients.”

The large scale of the project, which stretches over an entire continent, will help unlock answers about the processes water quality, Whiles said.  The scale of research at each site will range from very small to large watershed areas. The researchers also will try to determine whether small-scale experiments at the sites can accurately portray the ways in which life in those areas impact water quality in rivers and streams.

Whiles’ work will focus on experiments in tall grass prairie streams that lie on the Konza Prairie Biological Station in Kansas.  He also will work with SIU Carbondale personnel at the University’s Middle Mississippi River Wetland Field Station near Cape Girardeau.  The station will serve as a central facility for processing samples collected throughout the project’s geographical footprint.

Whiles’ participation represents one of eight collaborating institutions on the project.  Whiles, however, is not the only Saluki participating in the project. Michael Flinn, of Murray State University, who earned his doctorate in zoology at SIU Carbondale in 2006, will oversee experiments in the arctic tundra site in Alaska, Whiles said.