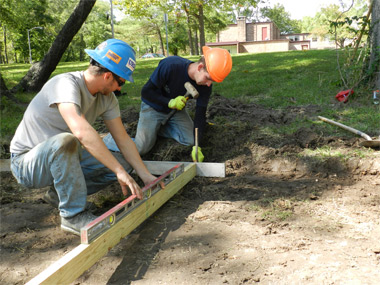 Walking path gets makeover thanks to partnership

CARBONDALE, Ill. -- A local construction firm, a labor union and a workforce training program are undertaking a major repaving project at Southern Illinois University Carbondale that will not only help the campus and community enjoy one its natural features, but also save the University a large amount of money.

E.T. Simonds Construction Co., in partnership with Laborers Local 773 and Laborers-Employers Cooperation and Education Trust (LECET), have begun work on repaving the path around campus lake. Laborers apprentices and journeypersons are completing the work through an asphalt class offered by the Illinois Laborers and Contractors Joint Apprenticeship and Training Fund, of which Bill Simonds of E. T. Simonds Co. is a management trustee.

The path, a popular recreation and exercise area that encircles the lake, was in need of general repair.  Small areas damaged by the May 8, 2009, derecho, which knocked down thousands of trees and damaged buildings and infrastructure around the campus, were previously repaired.

E.T. Simonds is providing the material and equipment for the project, while the Laborers Union is providing labor as part of a training initiative with LECET.  The project is the culmination of talks that began a year ago among Chancellor Rita Cheng and the partners now involved.

“This is a wonderful private-public partnership that will benefit the thousands of people who enjoy the beauty of the campus lake area,” Cheng said.  “We very much appreciate the cooperation, investment and effort of the Laborers, the Laborers-Employers Cooperation and Education Trust and E.T. Simonds Construction Co.”

Phil Gatton, director of Plant and Service Operations at SIUC, said the project will enhance an already valuable campus resource.

“This is an important project that will help our University maintain one of its most scenic pathways, one that is heavily used by people from all over the community,” Gatton said.  “We are most grateful for this generous donation.”

Workers began the project near the spillway area and plan to move westward in a generally clockwise direction around the path, officials said.  If all goes according to plan, the project should be complete in three to four months, depending on weather.

In its current state, the asphalt path stretches for about two miles.  Officials will take the resurfacing opportunity to reroute several small stretches of the path that lie in areas prone to flooding, providing a dry path regardless of the weather.  Overall, the path’s footprint and route will stay largely the same.

Bill Orrill, a member of the executive board for Laborers Local 773 and director of business development for LECET, said the union feels strongly about supporting the University whenever possible.

“We have a long-standing relationship with the University,” said Orrill, adding that Laborers Local 773 represents University maintenance workers. “We’ve been friends and partners for years and we always try to assist in any way we can.”

Orrill said local union training programs, such as the one he works on, provide several asphalt-training programs for apprentices each year to prepare them to pave roads in a professional, workmanlike fashion.  The lake path, he said, is a bit more challenging than a typical road project because of its remote location and other factors.  Workers, however, have engineered special ways to configure the paving machines and bring raw material to the job site using special equipment.

Some of the areas on the path that workers are relocating due to flooding will be made of concrete, giving the apprentice workers additional valuable training experience, Orrill said.  He said

Gatton said the donations from the company, union and others will save the University approximately $200,000.

Because workers will only work on short stretches of the path at any given time, officials expect little disruption for users.  The University is placing signs and barricades in appropriate areas to denote areas under construction and promote safety.  Users will need to temporarily avoid using such areas.